Back in the late 2000s, Rod Townsend had an excellent column in Gawker called “Past, Over” in which he was called on the phone by a New Yorker from the past: someone residing on just the other side of Giuliani-era gentrification. The past called to yell at the present and tell them just how lame their New York was compared to the New York of yesteryear. The past bragged of that halcyon era when ‘some’ non-Trust-funded people under 30 lived in Manhattan, a subway token cost $1.25, and avant garde New York City theatre was actually a thing. They boasted of going to Danceteria, The Roxy, and Tunnel; seeing Wigstock in Tompkins Square Park; and clashing with a vast cross section of humanity in one wild, sweaty New York City night after another.

The past is very much over and yet here and there are pockets of the New York that was: a New York that was somehow wilder yet gentler, more humane and yet more dangerous. Actor Michael Cavadias first moved to New York in the early nineties, during the city’s pre-9/11 glory days. As a young actor, he was a member of the Blacklips Performance Cult, an avant garde drag theatre troupe that performed plays each Monday night at The Pyramid Club. It was here that he debuted his cult famous fictional alter ego, Claywoman: a 500-million-year-old alien from the Mirillion Galaxy.

Claywoman’s face is craggy and cracked and she looks like a cross between the Junk Lady from Labyrinth and The Bird Woman from Mary Poppins. Claywoman appears on planet Earth in a show at Pangea in the East Village a few times a year to give one of the oddest, funniest, and most joyful cabaret performances that I have ever seen. She will be making her next appearance at Pangea Sunday September 11th at 7PM.

“I was sitting in my room and the name Claywoman popped into my head and I started laughing,” Cavadias told the Observer. “Initially she was very different, she was young, she was only 100 million years old.”

From 1992 to 1995, Blacklips Performance Cult took over the stage at The Pyramid Club on Avenue A on Monday nights. They put on plays that they rehearsed just once before performing. The Pyramid Club, a still existent and iconic drag bar, helped pioneer the careers of RuPaul and Lady Bunny in this same period.  As part of Blacklips, Cavadias worked with Anohni, a performer and musician who became the first trans person to be nominated for an Academy Award in 2016. Anohni wrote a play for Blacklips, The Birth of Anne Frank in which the titular character is birthed from the head of a drag queen in a weird retelling of the Virgin birth. It was into this context that Claywoman was born in Cavadias’s Blacklips play, Clayworld, set in the Mirillion Galaxy.

In 2000, Cavadias appeared in his breakout role as the gender nonconforming Miss Sloviak in the film Wonder Boys. Thereafter, he started to receive more regular acting work. Avant drag Claywoman disappeared for a time, but emerged again in the late 2000s as the audience interactive improvised cabaret act that he continues to do to this day.

While Claywoman hails from the avant drag scene of the early nineties, Cavadias doesn’t see her as a drag act, exactly. He prefers not to define her. “In my mind it fits whoever’s viewing it and how they’re interpreting it—that’s who it is,” Cavadias told the Observer.

Cavadias, who studied theatre at Tisch with Ruth Maleczech and Andre Gregory, as Claywoman incorporates aspects of drag with experimental theatre and dance. The audience is merely asked to accept that they are experiencing an evening with a 500-million-year-old alien. Interpretation is otherwise left up to them.

At the start of the show, we only know that Claywoman has entered the theatre from the slow thunk of her cane on the floor and the nervous giggles of the audience. “Make room for Claywoman,” the venue staff announce, as the audience clears the narrow aisles of Pangea for the extraterrestrial visitor. Hunched over and wearing her Rastafarian intergalactic sorceress costume, the galaxy’s oldest woman thuds to her stage at a snail’s pace. Bells tinkle from her matted gray locks as she creaks towards the spotlight. Pausing and sighing and catching her breath, she takes several minutes to make her way through the audience.

Rob Roth, the director of the 2008/2009 Claywoman show, brought in Butoh dancer Vangeline to teach this slowest of all dance forms to Cavadias. Butoh is a form of avant garde dance from Japan that came about in the 1950s as part of a counter cultural movement responding to the massacres at Hiroshima and Nagasaki. It is defined by its slowness. “In terms of moving really slowly and inhabiting the body of someone hundreds of millions of years old, that really took it to the next level,” Cavadias told the Observer. He also incorporates long pauses into his Claywoman act, and rich, unbothered silences fall on the audience throughout the performance.

Claywoman’s voice is a little Mid-Atlantic (or perhaps Mid-Intergalactic) and she sounds a bit like Julia Child, if Julia Child were from the Mirillion Galaxy. Her shows include a guest interview and an audience question and answer section, and begin with a monologue in which she takes you into her ancient and storied past. We explore her universe of harmonizing dinosaurs, rival intergalactic cabaret stars, and hundreds of millions of years of ex lovers and arch nemeses.

Perhaps the most intensely funny part of a Claywoman show is the guided meditation. In one show in 2019, Claywoman entreated the audience to shut their eyes and join her in a collective dissociation exercise. We were told to imagine ourselves riding through an empty void on the back of a spoon. The act of shutting your eyes during a cabaret performance and being made to laugh so hard that tears run down your face is singularly bizarre.

“A normal meditation is supposed to relax you, but Claywoman’s meditation is not very relaxing,” Cavadias told the Observer. The pleasure for him is watching the audience take the ride and land wherever they land.

Claywoman is extremely funny and worth seeing for comedy alone, but it is her warmth that has made the character so long-lasting.

“Lately, what’s coming up for me is this universalism,” Cavadias told the Observer. “It’s the perspective of an extraterrestrial looking at earth and seeing it just as one place that she visits and one place that she loves a lot and seeing all the beings on it as one thing…Even though to us humans are so different, to her she looks at it and sees they live these very short lives, they share a lot of the same pain, the same joys.”

Claywoman would probably be a very bad therapist, and yet seeing Cavadias’s show, and in particular the weird distancing impact of the performance, feels deeply humanizing and therapeutic.

Claywoman performs only a few times a year in small venues, and the audience of her shows can be a who’s who of New York City performers. It is definitely a ‘scene,’ if such a thing can be said to exist in New York in 2022. Here you might rub shoulders with a Broadway star, a local politician, or a Sex and the City castmember.  This clash of bodies in one tiny cabaret venue I take as hailing from the culture of The Pyramid Club, and a long gone era when New York nightlife could have a leveling influence. In addition to the performance itself, going to the show and being in the audience offers one a glimpse of that old New York, where a night on the town could bring you to a whole different planet. 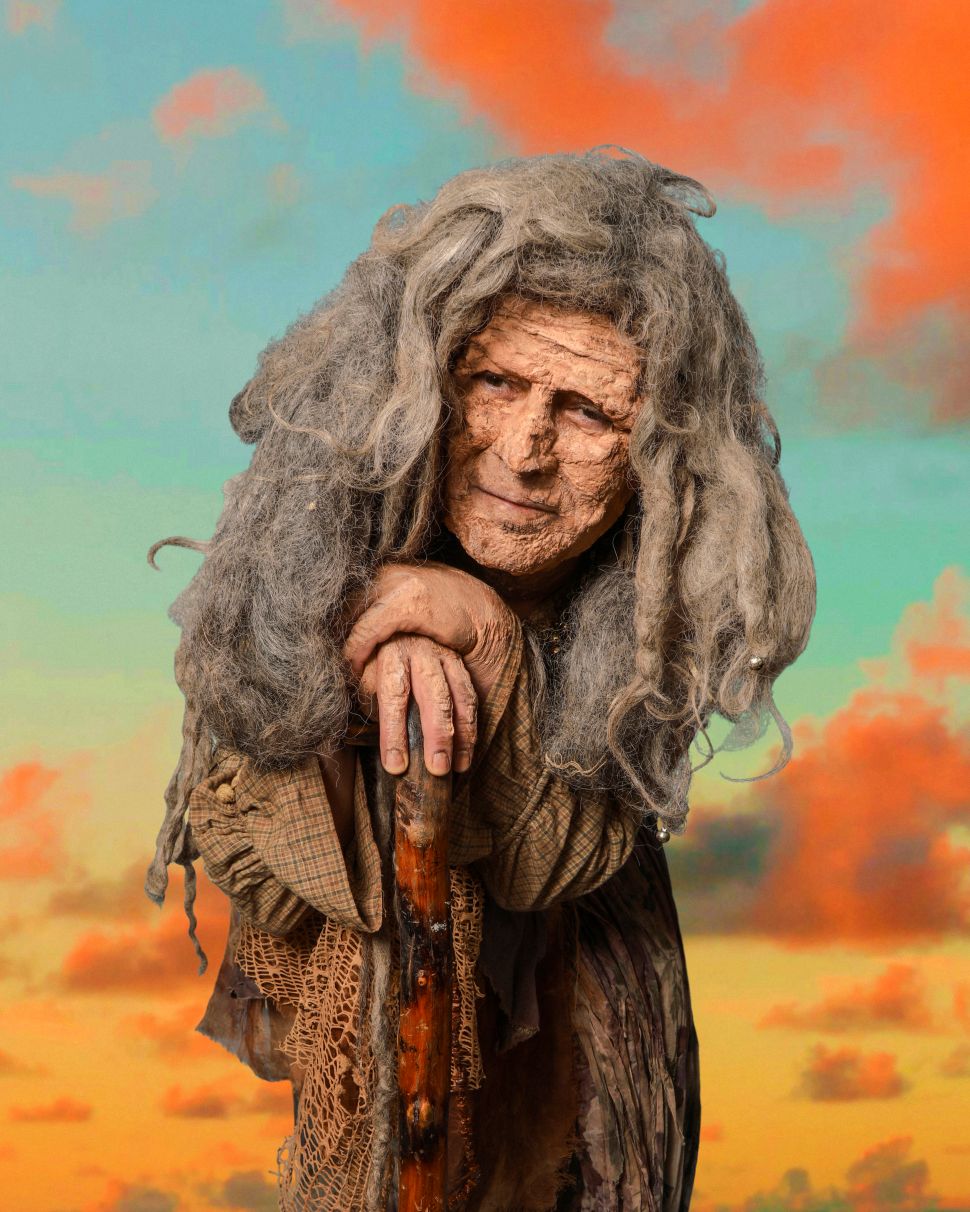