“Who is he? What is he? Is he a creature of a foreign power? Is he a creep? Is he dangerous? Is he nice? Real? Kind to his parents? Crazy? Sane? Man? Woman? Robot? Who is he?”

So flow the words of talk show stalwart and pop-culture documentary mainstay Dick Cavett as he introduces David Bowie to his audience during the artist’s early ‘70s Ziggy Stardust phase. Clearly Cavett is having fun asking the questions and reveling in the challenge to mainstream sensibilities of his viewers presented by the otherworldly guest he’s introducing; the answers are almost superfluous. Cavett’s words are an ideal way to kick off Moonage Daydream, filmmaker Brett Morgen’s 11th feature-length documentary and his third to take on a bona fide rock & roll deity following 2012’s Rolling Stones doc Crossfire Hurricane and 2015’s Kurt Cobain: Montage of Heck.

In Moonage Daydream, Morgen similarly feints inquiry while reveling in and soaking up the dynamic mystery, spectacle and wonder of the original man who fell to earth. Using a style that harkens to light shows of the Electric Kool-Aid Acid Test era (this is a documentary that should be played as loudly and largely as possible), Morgen throws the kitchen sink at Bowie. Sometimes it’s in an attempt to break his subject’s facade, but more often he’s just looking to add luster to Bowie’s armor.

Occasionally, this approach can feel like raisins in potato salad — too much and not exactly necessary. Clips of F.W. Murnau’s Nosferatu or Luis Buñuel’s Un Chien Andalou make a certain amount of sense, but Keanu Reeves’ 1995 cyberpunk stinker Johnny Mnemonic? There’s new animation, double exposures, interstitial titles— even Mickey Mouse makes an appearance, and no, he does not grow up to be a cow.

For the most part, Morgen is able to ground his visual freakout with Bowie’s live performances, which were incendiary in every era, but particularly explosive during the Ziggy Stardust Tour from ‘72 to ‘73. (Morgen draws extensively from D. A. Pennebaker’s film of the Spiders from Mars final concert at London’s Hammersmith Odeon in 1973.)

As for narration, Morgen relies on Bowie himself, culling statements about his identity and creative process from interviews with journalists and on talk shows like Cavett’s, where he was often treated like a sideshow curiosity.

This can be revealing. We learn that Bowie came upon his provocative fashion as a way to “prevent me from being humdrum to get a reaction out of people which would then encourage me to write.” He didn’t know his father well, barely tolerated his mother, but had his penchant for poetic outsiders alit when his older half-brother Terry gifted young Bowie a copy of On the Road sometime before being diagnosed with schizophrenia and committed to life in a psychiatric ward. (The film implies that Bowie’s own mental health issues may have been the seeds of the characters he embodied as a performer.)

Just as often, Bowie is putting on a subterfuge in his interviews, and Morgen makes no distinction between the truth and the fictions Bowie spins. Instead, the film makes the argument that neither did the cracked actor himself; the characters he played on stage and off were as close to the real man as he or the rest of us were going to get.

Still, one wishes that Moonage Daydream could have kept its raucous party going while also inviting his key collaborators, such as first wife, Angie, or Spiders guitarist Mick Ronson. (Only Brian Eno gets a shoutout.) It doesn’t have anything to say about his drug issues, or his flirtation with fascism and Nazi imagery (for which he would later apologize). When he meets and marries the love of his life Iman in the last act, you would have guessed it was his first ever serious relationship.

The film attempts, often successfully, to capture the extreme isolation Bowie not only felt but also required to produce his art — an impressive feat for a movie that wants to feel like a nonstop party and celebration. This is most powerfully done by showing Bowie’s colorful and psychologically anguished paintings, mainly portraits of dispossessed Berliners whose families were on the other side of the wall.

By harnessing Bowie’s creative and expressive voraciousness, Moonage Daydream makes up for being simultaneously too much and not quite enough. We may never completely know the answers to all of Cavett’s questions, but Morgen’s film shows definitively that the sound and vision Bowie left behind, when writ large and loud on the silver screen, makes for an otherworldly journey of beauty, mystery, and transformation. 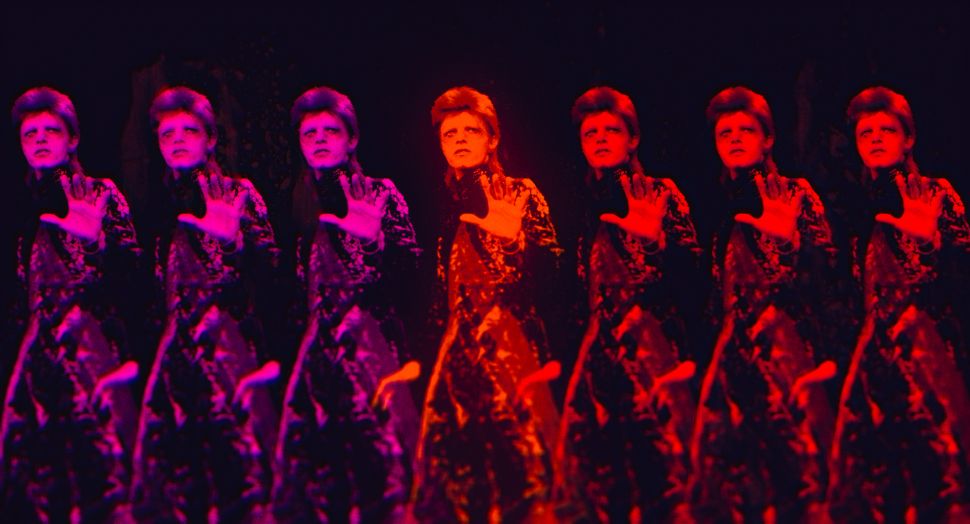