In “Debated Narrative” her new solo show at Chicago’s ENGAGE Projects, Raheleh Filsoofi revisits what keeps her awake: curiosity, otherness, and home, in all their complexities. The Observer spoke with her just before the opening of this new show.

This new show includes Imagined Boundaries (2017), an installation that features  Iranian-shaped cutouts inspired by the Ali Qapu Palace in Isfahan, a recognized UNESCO World Heritage Site built during the Safavid era. Dating from the 16th century, it was home to Shah Abbas, one of Persia’s most eminent rulers. The palace’s top floor includes a music room and an acoustic ceiling from which the shapes Filsoofi uses in her Imagined Boundaries are drawn.

While music infuses this choice, the artwork does not include any sound, considered as potentially distracting from the act of seeing. It’s a deliberate choice for Filsoofi as silence allows the unobstructed discovery of new faces—“others”—peeping through the black boxes of the cutouts in a video. These framed appearances remind of the boundaries of bird cages or mirrors but most importantly exist to transcend artificial boundaries between us towards a quiet, meaningful discovery and appreciation of a connection between two humans. In doing so, Filsoofi explores the roots of the old “Houses of Friendships” of Isfahan, conceived as interfaith centers between Muslims and Christian communities.

Imagined Boundaries is an iterative, evolving work which has incarnated new meanings for the artist over time. “I was more hopeful [in 2017],” Filsoofi says to the Observer, remembering the first time it was displayed. At the time, a three-minute phone call between the US and Iranian leaders led to an optimistic belief in new beginnings and warmed up relations, a possibility profoundly altered during the Trump presidency inaugurated a year later. Filsoofi had even set up a show which opened on the same day in the US and in Iran, with cameras on each side for people to “peek” at each other and demystify their differences.

She later conceptualized a second phase of this work during the Trump years highlighting internal divisions in the US and the country’s increased polarization. This time, Americans gazed at other Americans through the looking glass of these Iranian shapes, bringing “otherness” to the domestic scene.

In 2020, Filsoofi moved from Texas to Nashville, Tennessee, and saw the opportunity to bring her artistic lens closer, from global and national to local. “As an artist, I should look first around me,” she says, explaining the fluidity of the work as a necessary update to continue negotiating with an ever-shifting political present.

Time but also place permeates through Filsoofi’s social practice. While regularly on the move, she’s an artist deep-rooted in ancestry and her native Iranian culture. This duality is embodied in Odyssey (2022), a video that builds on her ongoing project, “Learning the Ropes” (2019-), which is also on show in “Debated Narrative.”

In Odyssey, Filsoofi revisits the optical illusion of an early 19th century visual technique called phenakistiscope which animates a wheel and provides a sense of continuous movement. Designs she borrowed from the imagery of ceramics during the Golden Age of Islam border Filsoofi’s jumping profile.

Childish and innocent at first, rope skipping echoes with deeper connections, such as with the possibility of freedom after years of entrapment and the difficult embodiment of a migrant’s experience. She’s never quite landing on solid grounds and constantly picks herself up—to keep going. Filsoofi recorded herself skipping in various States, from the Mexican border to the Canadian border as a way to bring attention to liminality and a shared immigrant belonging to enclosed spaces.

“Freedom and choice of movement have been a big struggle for me,” she remembers during our exchange. The Islamic Revolution, moving in the world as a Middle Eastern woman, understanding the legacies of US segregation and the extent of Trump’s “Muslim Ban,” living for five years as an illegal immigrant before obtaining her US citizenship, and COVID.

“I’m trying to take advantage while I have this freedom. Trauma arising from a lack of permission always exists in me. Even if it’s not related to me, it’s related to my family, my community, my Mexican students and colleagues so it’s always there, this fear,” she shares. The ground remains shaky, even after all these years.

“Freedom of movement pushed me to physically to move,” she adds, positioning her effort as part of a lineage tracing from Middle Eastern scholars and explorers, and their voyages that contributed to redefining identity, community, and culture in a spirit of generosity and openness. In Odyssey, Filsoofi literally and symbolically steps in the vessels of her ancestors.

As with Imagined Boundaries, Odyssey represents absence. In Imagined Boundaries silence conveys an absence of sound as much as a sacred language of mutual discovery. Odyssey reinterprets pottery and its creative potential in digital form, dematerialized albeit setting the video’s spinning pace.

Movement follows the potter’s wheel, a physicality engrained in the trained ceramicist now Assistant Professor in Ceramics at Vanderbilt University. Collecting soil and sound as Filsoofi does is taxing on the body and she sometimes wonders how long and how far she can keep going.

“Soil is beneath your feet while sound is all around you,” she notes, admiring the way in which these humble resources embrace us, even spiritually. Yet what’s their relationship? “One is ephemeral, the other one solid,” she contemplates, pauses, and thinks. To identify such layers is a prerequisite to understanding a place. “I document everything and then I create different works with that. I make vessels from each of the soil specimens I collect and the sound of the place is coming through that.”

“Plates are part of my practice,” she says. She recalls their nutritious aspect and their ability to bring people together. But why can’t a vessel hold sound instead of food, she asks, to challenge the assumed functionality of the object. She even once questioned her devotion to clay, briefly, when all its expanse eventually revealed itself to her during a gap year from graduate school in Iran.

Clay is generous and Filsoofi innovates through this medium; she tries new techniques such as dust painting. In her past performance work BITE (2021), Filsoofi carnally considers one of such ceramic vessels. She experimented this first during lockdown, surrounded by the presence of her plates and vessels—her “best friends.” Suddenly, as the consistency of clay reached a specific condition, she followed an urge to bite into it. “That stage was very inviting,” she remembers with a mischievous smile. “I started biting into it and I saw my mark,” she adds, seeing in this act not just a form of transgression and negotiated ownership, but also an attempt to turn a physical insecurity—her teeth—into a positive affirmation, a strength.

Filsoofi carefully lifts her plate in a ceremonial-like choreography and the way she delicately leaves her mark is both an homage to Native American cultures and an absolute rejection of colonialism and white supremacy. “Who gives me permission to use soil collected around and to leave my mark on it?”

Conscious of the special relationship between clay and land, she watched indigenous artists, how they sit and bless their clay. “The white man goes somewhere else, takes the resources, claims them as theirs, and takes them home,” she says. By contrast, she invests time and grounds her work in a cherished ecosystem of soil and people. “A challenge is to recognize a territory and where it is located—not just physically—and my relationship with it,” Filsoofi observes. “I’m moving in these places with respect.” She cares.

As an outsider, coming up with constant strategies can be exhausting. Raheleh Filsoofi jumps and jumps and jumps. Will she ever slow down? Not with this character. “I’m the one who’s curious now,” she admits. A curiosity inherently boundless. 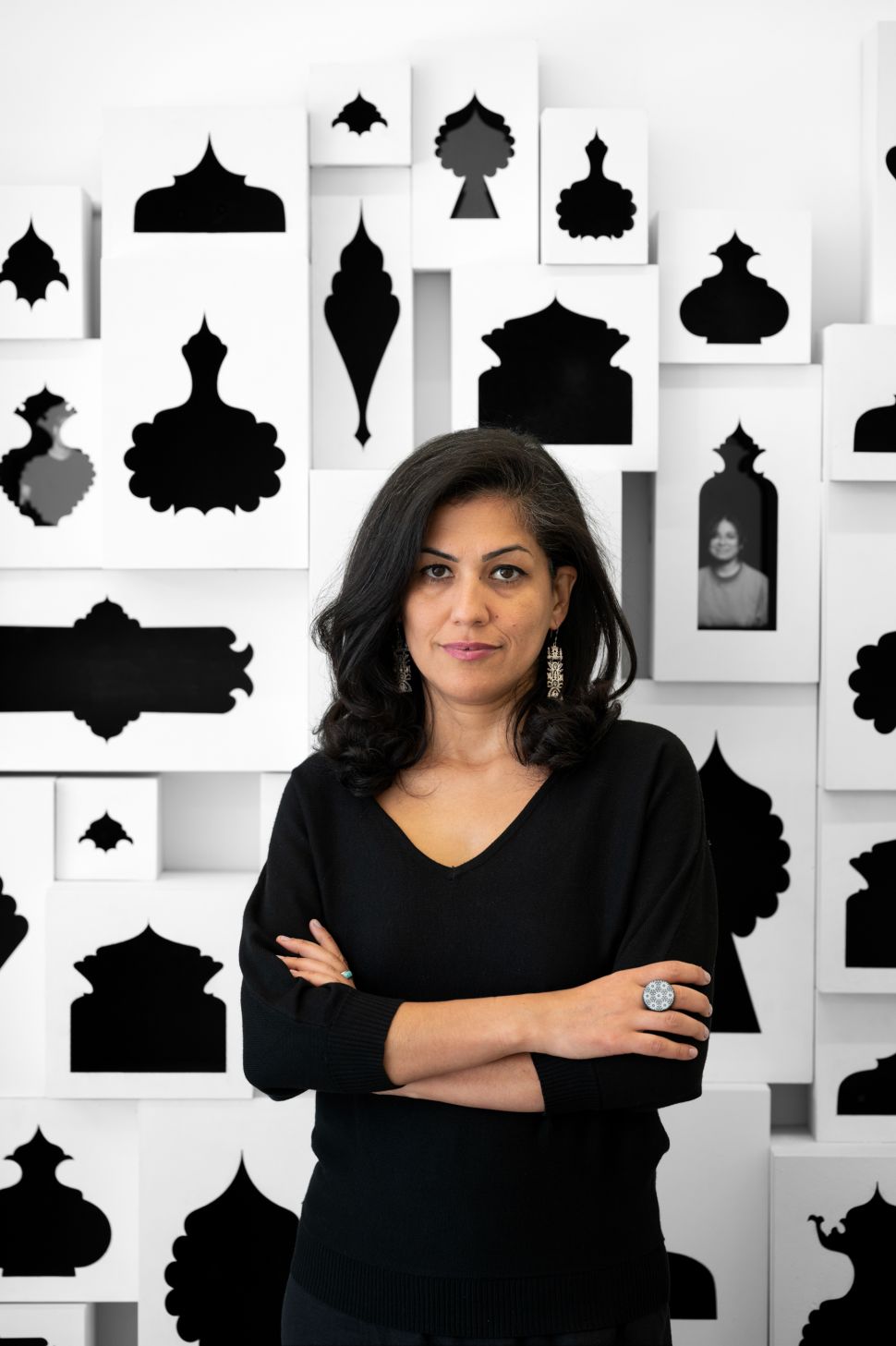