Medea, in all its forms, is a divorce story intimately concerned with the ways past relationships haunt present ones, how this haunting is infected by patriarchy and its anxieties, and how that same system makes it so the wrong people (second wives, children) are punished by relational fallout that has little to do with them.

Cherubini’s Medea, in this new production by David McVicar for the Met Opera, felt both timeless and utterly modern, set in a Regency era meets mythic era covered in tarnished golds and coppery greens. At the center of this is Medea, played by Sondra Radvanovsky, taking on a demanding role haunted by the ghost of another diva: Maria Callas, who famously revived the opera in the 1950s. Cherubini’s expansive and darkly clever score and here conducted with feeling and clarity by Carlo Rizzi, and François-Benoît Hoffman’s searing libretto has much to say about women, motherhood, trauma, and relationships.

In McVicar’s production, the Met stage is reflected by an enormous suspended mirror, hung from above at a severe angle, which doubled every object or figure but presented a slanted bird’s eye view that would otherwise be unseen—the backs of heads, the tops of tables, rugs on the floor. Visually, it was in turns stunning and sickening—there were moments that this uneven double-vision was physically nauseating to view. Hanging there as heavy and oppressive as fate, it served to limn the parallels between characters in finer detail.

Medea is a reflection of Giasone, her ex-husband who abandoned her after she helped him to become the hero he is, securing the golden fleece for him with her ruthlessness. Medea reminds Giasone of himself, reflecting back to him the moral cost of his heroism. A striking moment in the exes’ first duet showed Giasone taking off his jacket (in a clever costuming choice by Met newcomer Doey Lüthi), revealing black clothing that echoes Medea’s own. The implication here is clear: Jason sees himself in Medea’s mirror and doesn’t much like it, so he runs to his innocent new bride for a new vision of himself.

At the same time, Glauce and Medea are themselves dark doubles; Medea, as she herself points out, was once standing in Glauce’s place. Glauce is scared of Medea as a specter of Giasone’s past and of how Medea represents a possible future for Glauce. At any moment, it seems, a hero can abandon you, and a pretty ingenue can transform into a monster. Marriage, it seems, is a series of slanted mirrors, involving more than just the couple itself.

As Medea, Radvanovsky was something of a revelation, staggering around the stage, looking as if she’d been dredged up from the seafloor and committing fully to Medea’s mix of power and abjection, with huge, smeary-lined eyes shining out from straggly auburn hair. Vocally, she was often superb, especially in the first and second acts. All former vocal issues have vanished, leaving a steady, steely technique that gave the singer room to make dramatic choices (she has a distinct “lying” voice, a little lighter and more nasal) without abandoning her sound.  If there were moments where a certain pinched quality crept in, these were more than made up for by the emotional intensity and depth that characterized her singing.

Cherubini, in another feminist move reserves almost all judgement of his anti-heroine. Medea’s murders of her children may not be just or morally good, but Cherubini is very intent on making them intellectually and dramatically comprehensible. In Radvanovsky’s hands, this sympathy made for a beautifully ambiguous portrayal.

As Medea’s servant Neris, Ekaterina Gubanova displays a controlled and powerful sound rounded out with sensitivity in her second act aria (clearly there in the drama to give Medea a chance to lie down). The creamy richness of her voice was well matched with Radvanovsky, and Gubanova brought out the fierceness of both her fear and longing towards an increasingly unhinged Medea.

Matthew Polenzani, reliably excellent both vocally and dramatically, was very good here as well, tapping into his signature dynamic control to bring Giasone welcome emotional shading, showing him at once cruel, weak, sympathetic and afraid.

Janai Brugger, who has little to do as Glauce, but whose bright clear sound provided lovely contrast with Radvanovsky in the first act, was appropriately nervous and frenetic as she tried to escape this doomed marriage. She reappeared to die a gruesome, skin-melting death in Act III, stretched out on a table in one of the most striking images of the production.

As Creonte Michele Pertusi had a sound that reminded me, rather poetically, of the crunching of autumn leaves; crisp and slightly brittle around the edges, but with a core of earthiness. In his Act II confrontation with Medea, Pertusi crafted a Creonte whose blustery threats concealed hints of fear.

This was Medea’s (and Radvanovsky’s) show, and in the end, she burned the house and the mirror to the ground, taking everyone but Giasone with her. In a world in which women cannot enact revenge on the men who wronged them, they take it out on other women and children; the Giasones of this world always get away with their lives. Ultimately, Medea refuses to reflect him anymore, choosing self-immolation in the arms of her dead children, acting as judge, jury, accused, and executioner all at once, smashing the mirror. 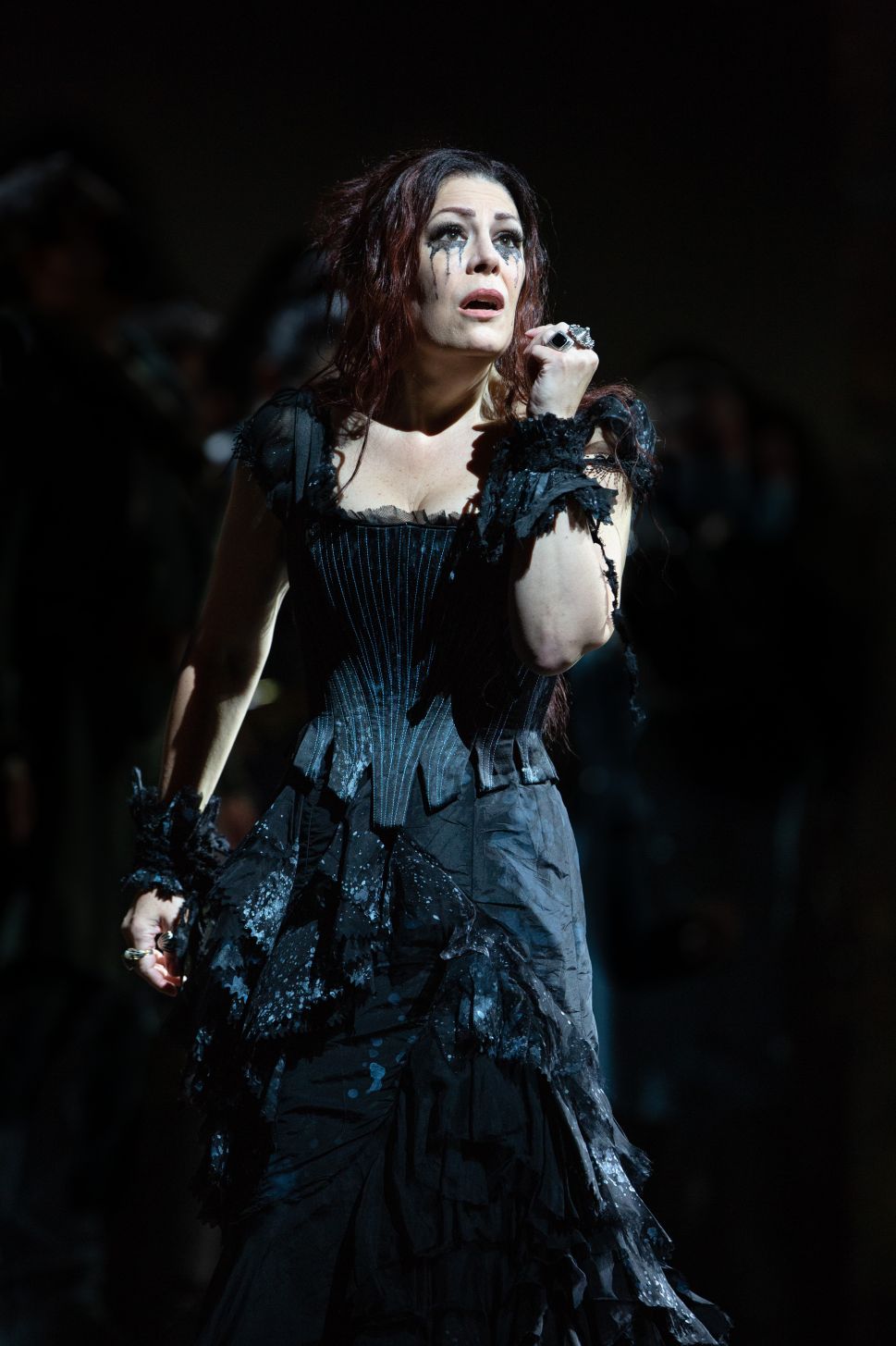