There should be a moratorium on dicks and tits in contemporary art. Certainly nudity in art can say something incredibly valuable. Ana Mendieta, Greer Lankton, Deana Lawson, and Carolee Schneeman all easily come to mind. But too often it’s a stand in for blank opacity.

Of course, what should one expect of SPRING/BREAK’s 2022 Art Show when the theme is Naked Lunch?  The press release rings in a belle epoch full of excess, beauty, and renaissance. Many interpreted the theme literally.

Painting breasts or making a chair of nipples, while a good photo-op, does not say as much about sexuality as artists may wish them to. It’s not just women, soft boys are just as much to blame with their racked focus pictures of dicks covered in flowers. After the fourth or fifth booth that turned on simple nudity I lost track. Still, between the Takashi Murakami and KAWS wannabes, there’s a lot to admire this year. Over two massive floors of independently curated art one can find stunning portraits, blow-up slides, fountains of youth, and golden shit.

On the Tenth Floor, the incredible Fay Ku has a large breadth of work called “Axonometric Tongue.” Primarily working on Bhutan paper, Ku uses gouache and metallic details to challenge traditional Italian Renaissance timelines with details of Mandarin structures. Containment Units 2 and Containment Units 3 are both captivating with their hypnotic, exquisite repetition. Throne, a large center-piece in the room, depicts a saintly woman surrounded by children as she steps on a smaller woman. Ku’s gold and earth tone palette is a mesmerizing feat, accentuated by rich royal colors and gold detail.

“Heterotropic Home” is a group show curated by Milly Cai, Gemma Cirignano, and Madi Shenk. Spanning a living room and a dining room, Heterotropic Home is a breath of fresh air from the rougher attempts at creating immersive environments.

Isolina Minjeong’s Untitled sits on the couch to greet you. A show-stopping ceramic sculpture of a small gremlin whose body has been mishmashed between flesh and bone, it’s already a hit for selfies. Minjeong has created a small battalion of these “Little Woogies.” Above the couch, hangs current Bed-Stuy Art Resident Aliyah Bonnette’s beautiful quilt Under the Yellow Fever. Bonnette also has a stunning larger scale quilt piece, They Just Want You To Take a Sip of Your , illustrating a Black woman spilling a jar of that turns into a sheer blue fabric applique. It’s a piece you have to see in person to appreciate the breadth of textures and staggering size at 67 x 75 inches. Bonnette’s work incorporates fabric and unfinished quilts from her grandmother, mediating lineage, collaboration, and ownership.

The Apple TV in the living room is playing I’ll let you go, a video piece by recent Pratt alum Kristina Naso. The piece combines a conversation between Naso and their mother with a clever Sims 4 simulation. Naso informs their mother that their sister’s daughter is pregnant discussing the intricacies of emojis on Instagram. The laughter during the conversation is tender against the loneliness of the familial phone call.  We bond over a Kuromi necklace and a My Bloody Valentine shirt. I successfully resist the urge to tell Naso, I am a lapsed video artist.

Xiangni Song’s bold, vivid oil paintings of young women doing everyday things are a treat. Cat Can Talk is an extraordinary example of the amazing work many young woman artists are doing, combining everyday scenes with a slight surrealist edge.

In the dining room, Katie Rauth’s Un Triomphe, Effondré  is an impressive feat of sugar plates, bowls, goblets, and candied rose petals. Slowly, co-curator Shenk tells me, it will melt throughout the art fair. Chanakarn Semachai (Punch)’s playful stoneware mugs, bowls, and vases are sure to sell out. More affordable than many of the works in SPRING/BREAK, they’re sweet and colorful and I’m dropping hints that someone needs to buy me one for my birthday.

“Vote!” I overhear one artist telling a patron. It’s opening night and older curators are mingling with the fresh MFA graduates of Brown and Yale. They seem to be attracted to pink, angular pieces. Another artist talks about the “economically disadvantaged.” The city has just reversed the mask mandate and few are wearing a mask in the fair. Burning Man has just become a superspreader event.

A few steps beyond the woman talking about “past life regression” twirls a young girl in a red dress. I wonder which pieces she likes.

Stuart Robertson’s large reflective piece Long Supper, blends aluminum, textiles, paper, acrylic, gouache, and more to create a technicolor wonderland challenging traditional spectatorship. The image gathers Roberton’s aunt, grandmother, mom, and dad at his grandmother’s table in Jamaica–though many of the figures are obscured by the aluminum. DIY as do or die, they were hanging mirrors to enhance the viewing experience as I walked through.

Very strong boys may be interested in Noah Kloster’s dry wit and charming exhibit “Noah’s Big Boys.” Recreating the nostalgia of the franchise primarily based in Michigan and California, Kloster crafted 100 Boy Boy sculptures and situated them among fast food memorabilia. A little coffee machine sits next to a Big Boy record player, Dunkin Donuts cups, concrete Coke bottles, and a stool shaped like an anthropomorphic burger. Beware the diner nostalgia, it’s intoxicating.

Now one must make their way to the Eleventh Floor. Good luck remembering where the elevator is. When you do, Marilla Cubberley’s masterly nebulous sculptural garden awaits. Archways, mobiles, and cynical clouds float around as you walk through polymorphic arches.

Admire Jac Lahav’s very blue exhibit. I would call it indigo, but perhaps I would be alone in this. Further in, tucked away in the corner, two intricate painters of different stripes reside in Tomato Mouse’s exhibit. Lena Christakis’ surreal minimalist jewels shine depicting night snacks, wilting flowers, lamps, and muted dream living rooms. The spacious cosmos remind one of a Mary Lattimore album cover. Perhaps my favorite piece is Erin Connolly’s exquisite Nymph Meal. An astonishing oil painting of a deer laying on silk garments and roses composed with arresting brush strokes and immaculate detail, a river of lush original imagery.

As I wander the exhibit for nearly three hours (there’s a lot to digest), I’m asked if I’m an artist.

Maybe it is, but writing consumes a different part of the brain. The ability to create an image that stuns the viewer into submission is a different trick than what’s required of befriending a reader. When you’re saturated by art, it’s easy to walk to the next booth simply because you think you’ve seen it all before. Another proto-pussy-hat installation piece. We are never done with the semiotics of genitalia and never will be.

SPRING/BREAK’s DIY curation style allows for a cacophony of new voices, many of whom bring fresh original style, and that is deeply important in an art market primarily invested in taking safe bets.

If you see the girl in the red dress, ask her what her favorite piece was for me. 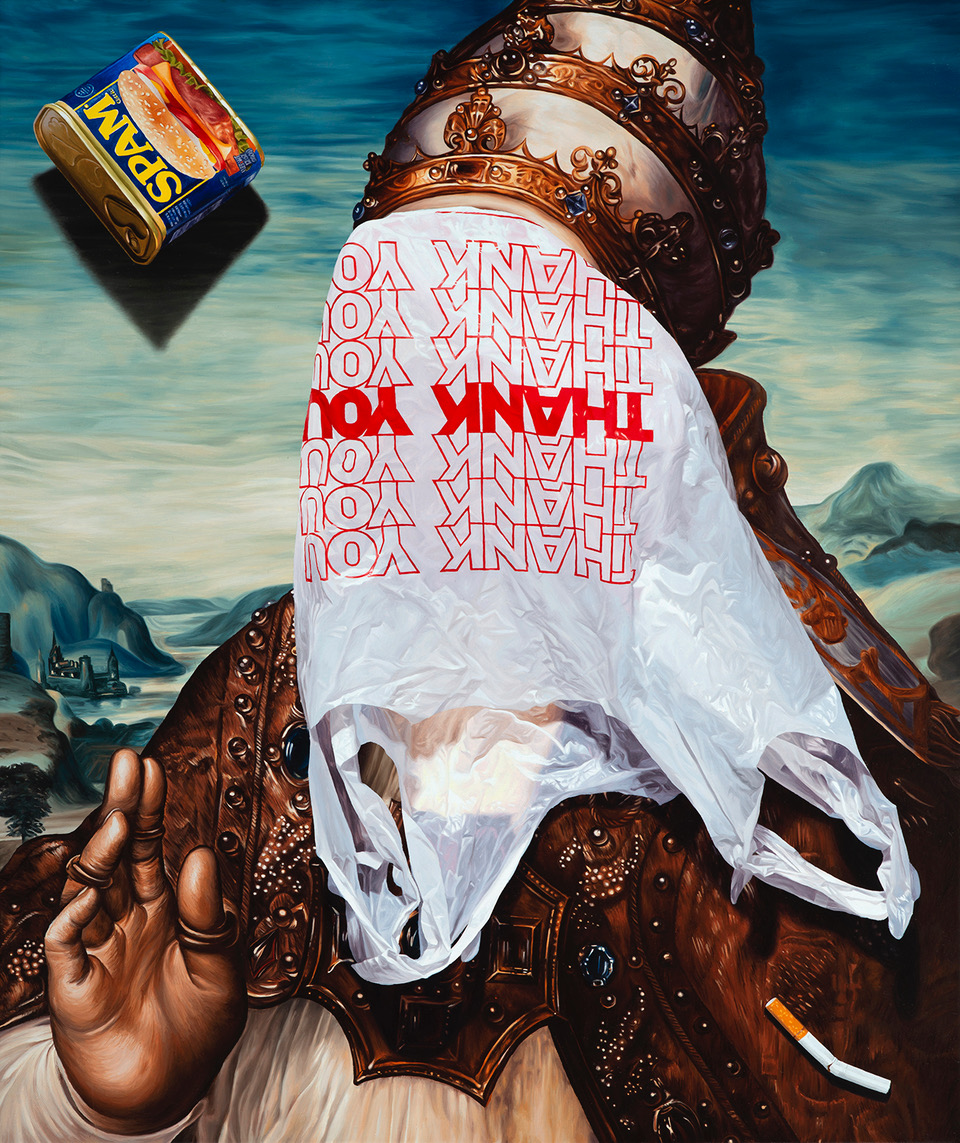