An equally dreamlike and urgent act of radical archiving, Sierra Pettengill’s Riotsville, USA traces the origin of America’s militarized dismantling of social justice movements to a specific time and place.

That the time is a five-year period starting in 1964 when uprisings in over 100 cities brought to bear the agony and despair caused by the racist systems and policies brought to bear upon African Americans is not surprising. That the places are a couple of fake towns — cheesy-looking, hastily-constructed sets — where police practiced riot control overseen by military brass, well, that’s a bit of a shock.

Before Pettengill started digging around, few outside of those involved and a handful of historians knew that such places ever existed, let alone that they have played such an outsized role in American life. Indeed, seeing armored police wielding batons, tear gas, and firearms loaded with rubber bullets at nearly every public protest calling for accountability and civil rights has become so commonplace it is nearly impossible to imagine a world where the response could have been anything different.

Completely eschewing talking heads and relying on archival footage contextualized by captions and narration, Riotsville, USA is masterfully stitched together by editor Nels Bangerter, who worked a similar alchemy in 2016 with Kristen Johnson’s Cameraperson. Jace Clayton — who’s been releasing music as DJ/rupture for more than 20 years — uses vintage analog synthesizers to create a pointillist score that makes visceral the strangeness of the Riotsville sites, constructed by the military for training the police, who sit in bleachers observing as soldiers demonstrate how to suppress protesting citizens.

The heartbreak of Riotsville, USA— the melancholy that colors its poetic agitprop— is that it presents the possibility of another fate. In 1968 the Kerner Commission defied the expectations and desires of President Johnson when it released a report finding that racism was the root cause of national unrest, not “outside agitators.” The bulk of the report recommended that the Federal Government invest billions to create access to suitable housing, employment, education, and healthcare for African Americans and the poor; a small addendum noted a need for increased police spending in the likely event of more riots that coming summer.

Johnson and the Democratic-controlled Congress, already embroiled in an expensive and unpopular war in Vietnam, ignored the Commission’s big-ticket items but supported the police funding. It was a shortsighted, easy, and wrong legislative answer to a complicated issue. Offsetting the story of a destructive government response Pettengill uses copious footage from the Public Broadcast Laboratory, a forerunner to PBS, which covered the uprisings of the late-’60s from something other than a white perspective. One of the film’s most moving moments is Reverend Frederick Douglass Kirkpatrick’s performance of the protest song “Burn, Baby, Burn” in the days following the assassination of Reverend Martin Luther King Jr.

The film concludes not with the uprisings at the 1968 Democratic Convention in Chicago — where protestors chanted “the whole world is watching” as the police beat them down — but a few weeks earlier during the Republican convention in Miami, where fierce but less well-covered protests took place in the Liberty City neighborhood. (Filmgoers may remember Liberty City as home to the public housing project where Chiron lived with his mother in Barry Jenkins’s 2016 Oscar-winner Moonlight.) The protests echo not only the otherworldly Riotsville footage (the Miami police had trained there) but also May, 2020, when Attorney General Bill Barr sent a federally trained riot team to Miami to quell the protests that followed the murder of George Floyd.

The ethereal manner in which Pettengill crafts her often chimerical verses — rhyming a constructed reality, history, and our present day — can be disconcerting. It is almost as if Riotsville, USA demonstrates how oppression has taken over not only our systems, but also our imagination and even our dreams. It all leads to the pointed but open-ended question: is there time, or will, to wake up from this nightmare? 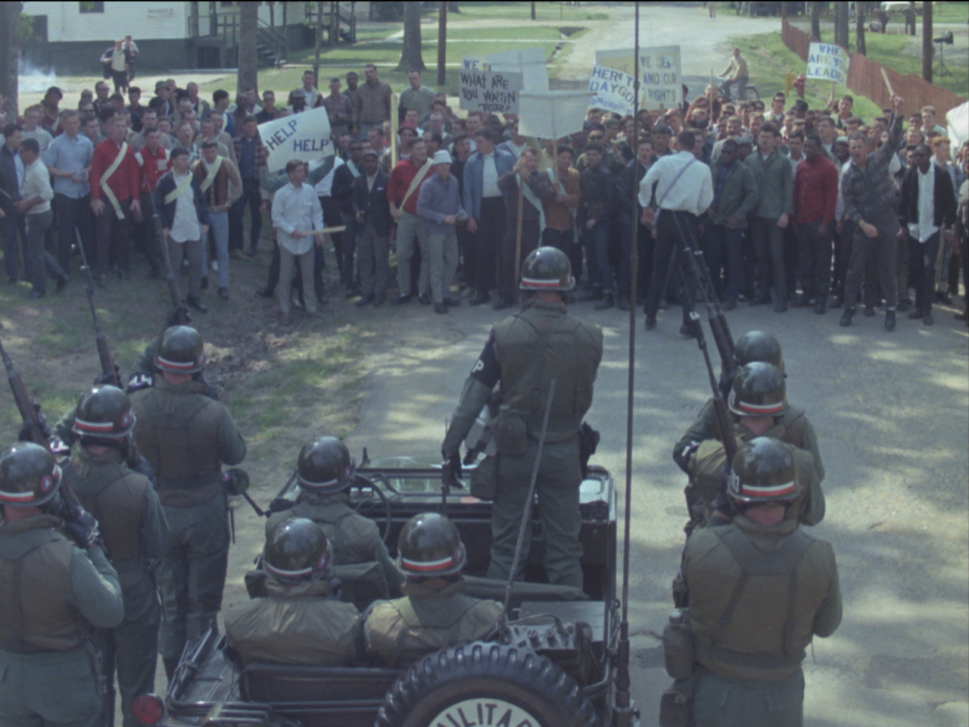