J. Bradford DeLong is an economist who teaches at the University of California Berkeley, and served in the Treasury Department under President Bill Clinton. He is the author of multiple books, including the just-published Slouching Toward Utopia, an economic history of the twentieth century. Observer executive editor James Ledbetter recently interviewed DeLong; this transcript has been edited of length and clarity.

Observer: So you’ve written a lot of books, most of them shorter than this one. What made you take on a topic this sweeping?

DeLong: It was a book I wanted to read and no one else was writing it. So I decided I should. I wrote a draft chapter or two, and then Tim Sullivan of Basic came along and said, why don’t we put you under contract to do this? And then about every three years, they’d call me up and say, where is it?

How long was this?

Give us a summary of your grand narrative.

It’s mostly a Karl Polanyi narrative, it’s that in 1870, all of a sudden everything changed. For the first time technological progress became fast enough that there was actually a possibility that humanity could bake a big enough economic pie so that everyone could have enough. And that governance could be actually focused on making a truly human world, rather than governance being figuring out how to run a force-and-fraud machine on everyone else so that it alone could have enough. And indeed from 1870 to today, technological progress has been absolutely wonderful. By the scale of any previous century, they would say you have much more than enough for utopia. But while we have done a superb job at solving the problem of baking a sufficiently large economic pie, the problems of properly slicing and then tasting the pie, of making sure everyone actually does have enough and utilizing our wealth to allow us to lead lives in which we are healthy, safe, secure, and happy, that continues to totally flummox us.

What specifically happens in 1870 that causes this tremendous technological transformation?

In 1870, we get the coming of the industrial research lab, which allows us to discover and develop technologies at a very high rate; of the modern corporation that allows us to develop and deploy technologies; and then with full globalization, the opportunity to deploy and then to diffuse as other people copy what you’ve done becomes so vastly attractive. Someone like Nikola Tesla, who was borderline socially dysfunctional, but also knew better than anyone else how to make electrons get up and dance and advanced us all by himself at least a decade in terms of developing electric power, would’ve been totally useless without George Westinghouse to create the industrial research lab and smooth the ruffled feathers of everyone else working there and also the Westinghouse corporation to then take and deploy the stuff. And then the copycats Edison and elsewhere, and the financing from JP Morgan and George Fisher…those change Tesla from being someone who is not a big net gain to society to someone who moves one-tenth of the economy forward by 10 years. And since 1870 human technological prowess has at least doubled every 30 years. That means enormous amounts of Schumpeterian creative destruction: immense wealth, new industries, occupations, etc—but old industries, occupations, incomes, communities vanish.

One of the most interesting aspects of the book is that while the events and the trends that it discusses are relatively familiar, there are just constant surprises. For example, I would’ve imagined that most people attribute the strong and steady growth that Western Europe enjoyed after World War II to the Marshall Plan. But you argue that the Marshall Plan was kind of small potatoes.

It’s one percent of US GDP, three percent of European GDP. Even if you say we get a 30% rate of return on these investments, as opposed to a normal seven, five or three percent return, that’s just 0.3% per year on the growth rate.

So if it wasn’t the Marshall Plan that led to those glorious years, what was it?

In some respects, it was what happened in Eastern Europe after 1990. Lots of people saying we see the future and it’s to our west. We don’t care about what the political ideology is. We want to become a lot more like America. We want to do it now because they’ve got it, and we don’t. And that at least gives society and government a substantial direction. Plus the fact that the right had clung to Nazism for much too long and the far left was tied to Joseph Stalin and could not untie itself.

The chapter on inclusion is really important for the “slouching” part of your title. In other words, by the middle of the 20th century, the global economy has figured out how to provide a very good standard of living for a huge number of people. But definitely not everybody, not even in the most developed countries. Why didn’t that happen?

The hope after World War II was John Maynard Keynes saying, put my technocratic students in charge of the macro economy. Everyone will have a job and labor will have substantial social power. Wages will be reasonable. And with a full employment policy, interest rates will be low, which means that returns on capital will be low, which means that if plutocrats want to exercise their social power, the only way they can do so is they spending down their capital. Hence they cease to be plutocrats. Hence there may be a lot of wealth inequality, but there’s not a lot of income inequality. And so maldistribution is not an incredibly huge thing—and have full employment, programs that redistribute income and wealth, progressive tax system, heavy inheritance tax, a lot of public provision of commodities, taking them out of the markets as well and provide parks and schools and roads and pools then you do have something that looks like a proper road to utopia. The he problem is this fails its sustainability test in the 1970s. Go and talk to Paul Krugman about it, he says “if only we hadn’t had the inflation.”

I’m going to come back to that. Related to the idea of inclusion or exclusion is North/South divide; one of the points you make is that something important happened around 1990.

The African retardation ends. The post-World War II decolonization two decades are good for literacy and good for public health in Africa, but absolutely horrible for production. There are a lot of people who say that it really was 400 years of slavery and the resulting destruction of social trust at a very basic level. You could actually run an industrializing economy and a primary product exporting economy, as long as you could borrow your colonizer’s market network and trust that contracts will be obeyed. And that bureaucrats will be honest. But once they withdraw leaving nothing, then you have to try to build up the social division of labor nearly from zero in an environment in which governments with late 20th century means of coercion are able to exploit and corrupt a great deal.

That in Africa seems to come to an end in the 1990s. From the year 2100’s perspective, people will say that neoliberalism and the global south actually unlocked a great deal of things that had been frozen in stasis in the post-World War II generation, under the influence of really existing socialism to various degrees—nationalism and bureaucratization and so forth. That’s, I think, an important issue and not one I spend enough time on.

You obviously started this book well before the current bout of inflation that a lot of countries are experiencing right now. But what you say about inflation in the 1970s and how it spawned this political and intellectual reaction seems highly relevant right now.

When aggregate demand is too low, you have a lot of people who lost their jobs and can’t find new ones and you have people who don’t dare ask for a raise because then they think they’ll be first on the block to be fired if something bad should happen. And those are relatively small groups of people, unless it’s a Great Depression. But with inflation, pretty much everyone finds they can’t buy things at the prices that they expected. So the market economy has disappointed their expectations, and has done so in a way that’s got to be the fault of the rulers. And that’s a principal sign that we need a different group of rulers.

I recognize that your use of “utopia” is at least a little ironic. But it’s interesting that the period and the very developments that you credit are exactly the same period and developments that a lot of people would say is exactly when humanity went on the wrong path, that put civilization on a carbon-based path of global destruction. You talk about the environment a little bit in some places, but I wonder how you think people should think about the tradeoffs between economic growth and climate change.

Economic growth in renewables is politically, and I’d say also humanly, kind of the only way to keep from cooking the planet. Technology is about the only thing that can potentially save us here. A carbon tax would be best and fairest, but large-scale public subsidies for renewables are a good second best. And we need to move there as fast as possible. As for the coal-based road to industrialization, that’s the only way that we get from being limited by human and horse muscles to actually being able to use more power. I think if you don’t do that, you will never get economic growth fast enough to outrun Malthusian pressures. And as long as you have a world of patriarchy in which women only have durable social power if they’re the mothers of surviving sons, you really need to get a lot of economic growth very quickly in order to get people rich enough for infant mortality to fall low enough for people to say, ‘Gee, maybe we don’t need to try for nine children in order to have two that survive’. Without coal, you have a Malthusian world of medieval poverty. Unless you a figure out a way to get rid of patriarchy, which is a difficult thing to do. 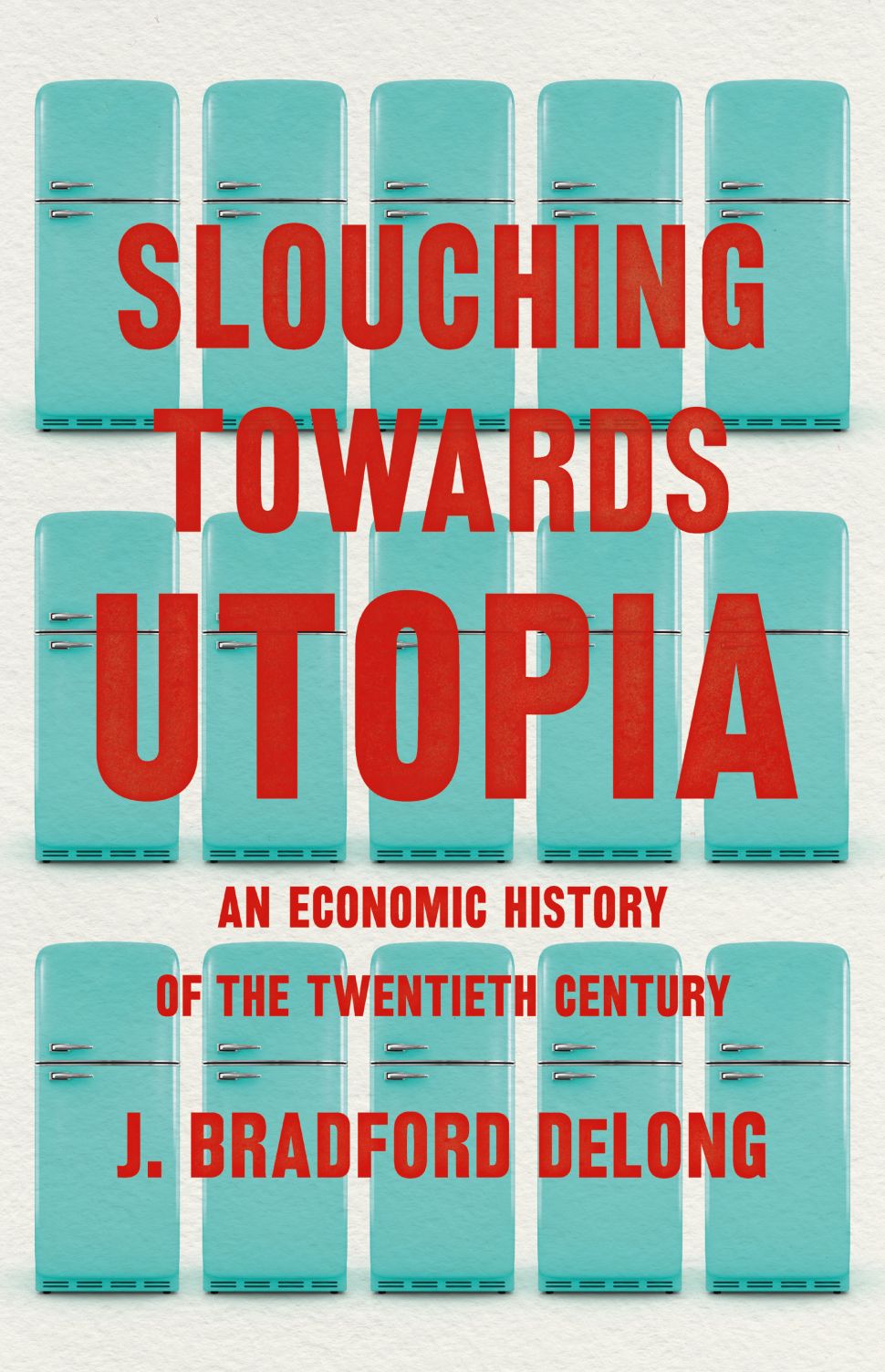