On September 4, 2022, former President Donald J. Trump kicked off the fall election season in Wilkes Barre, PA, with a rally for GOP Senate candidate Mehmet Oz and gubernatorial candidate Doug Mastriano. But he quickly got to his main topic: the warrant served by the Federal Bureau of Investigation on his Mar-A-Lago Club on August 8, 2022 to search for and recover government documents, many classified, that Trump appears to have illegally retained when he left the White House in late January 2020.

But of course, that wasn’t what he said. The Democrats, Trump declared, had sent “the FBI storming through the home of their number one political rival.” xxThe idea that this government agency “has morphed” from a non-political national police force “into a campaign arm of the Democrat Party,” as one conservative pundit would have it, is bad history. Although Republican faith in this agency has declined sharply since 2016, the nation’s top cops  have been consistently perceived as a threat to democracy throughout the 20th century. But before Trump became president, it was conservatives who , consistently defended the agency from attacks,  while liberal reformers and the left accused the FBI of having too much power.

First, there have always been Americans who feared a centralized police power. The FBI was born out of a 1908 political conflict between President Theodore Roosevelt and Congress, during which Roosevelt rejected restrictions placed by the House of Representatives on the use of Secret Service agents to investigate government corruption. Although Roosevelt denied that he wanted such a thing, the conflict was resolved by creating a new entity, with 32 “special agents” drawn from across the federal government. As the New York Times explained, the new Bureau of Investigation “would be a sort of Federal police, to be incorporated under the Department of Justice.”

Yet members of Congress also feared that, small as it was, the Bureau of Investigation might evolve into a European style “secret police.” Those fears were realized within a decade, when agents were used to investigate and arrest labor activists, accused Communists, and anarchists during World War I. Between 1919 and 1920, after a series of spectacular raids ordered by Attorney General A. Mitchell Palmer and directed by a young Department of Justice assistant, J. Edgar Hoover, liberal public servants—including federal judges, Secretary of Labor Louis Post, and future Supreme Court Justice Felix Frankfurter—declared attempts to police Americans’ politics lawless and unconstitutional.

Narrowly escaping Congressional censure for his role as a Red hunter, J. Edgar Hoover took over the Bureau in 1924 (he ran it until his death in May 1972), and vowed to keep the agency out of politics. As Hoover told the story, when he interviewed for the job vacated by William J. Burns when his agents were implicated in a Republican corruption scandal, he told Attorney General Harlan Fiske Stone: “The Bureau must be divorced from politics and not be a catch-all for political hacks.”

It was a useful fiction. On the one hand, over the 48 years during which he oversaw a massive expansion of the agency’s reach and size, as well as several name changes, Hoover certainly rejected partisanship. A conservative, he never registered to vote in either party; as importantly, he needed friends on both sides of the aisle to ensure that the Bureau, renamed the Federal Bureau of Investigation in the 1930s, had the budget to grow and prosper under his direction.

On the other hand, Hoover’s understanding of what it meant to protect America was itself political, and he was aligned almost completely with the conservative struggle to prevent social change after World War II. While the FBI investigated Nazis in the 1930s and 1940s and conducted a belated investigation of the Ku Klux Klan after 1965, for much of his career, Hoover pursued a range of political investigations of Communists, socialists, anti-war and civil rights activists, homosexuals, and radical feminists.

As early as 1964, journalist Fred J. Cooke ripped the cover off these political activities with his book The FBI Nobody Knows. The book gave voice to liberals’ growing antipathy to the FBI: one, quoted in radical William Kunstler’s review of the book, accused Hoover of running an agency engaged “In investigating, in snooping, in informing, and in creeping up on people.” But a conservative reviewer undermined Cooke’s sources as informers themselves, disgruntled fanatics who sought “to destroy the reputation of Mr. Hoover and the FBI, now almost the last security outpost in our land.”

During renewed efforts to reform government after the 1973 Watergate hearings, liberal critiques of federal police and security agencies had a wide audience. Idaho’s Democratic Senator Frank Church held a series of hearings in 1975, uncovering domestic intelligence operations in both the CIA and the FBI that had made direct interventions in American political life.

Yet, even as conservatives defended the FBI, by the 1980s, far-right activists, many veterans of the Vietnam war who felt betrayed by the government, decided—as historian Kathleen Belew has put it—to “bring the war home.” White supremacist, militia and neo-Nazi groups declared war on an American government that, in turn, began to investigate them. On August 21, 1992, this animosity exploded into the open at Ruby Ridge, Idaho, when the FBI laid siege to a survivalist family suspected of dealing illegally in guns, killing several.

Although the FBI sought to reduce violent encounters with right-wing extremists, as that movement grew and moved into the conservative mainstream, the FBI’s symbolic role as the agent of an oppressive and corrupt state solidified on the right. Furthermore, as faith in politics themselves eroded among conservatives after 2008, the notion that the FBI could, and would, be used to enforce the will of leftists and liberals took root in the Republican party itself.

Understanding the power of conservatives’ fear and loathing of state power, Trump began accusing the FBI of being political as soon as he took office. In 2017, as the FBI was investigating possible collusion between his presidential campaign and Russia during the 2016 campaign, he fired Director James Comey. In 2018, Trump charged that the Obama administration had planted an FBI agent in his presidential campaign. The Biden administration, Trump railed in Wilkes Barre, was “weaponizing” the agency “like never, ever before,” while agents were “vicious monsters controlled by radical left scoundrels.”

Thus, it is unsurprising that a government agency consistently praised by conservatives since its creation has become so hated on the right that, shortly after the Mar-A-Lago search, a United States military veteran attempted an armed assault on the FBI’s Cincinnati office. FBI hatred has become a unifying theme on the right. In March, 2021, Dinesh D’Souza called for the abolition of the FBI “because it is no longer a neutral police agency,” while right wing pundits have rallied around the idea that, as Fox’s Tucker Carlson put it on August 27, 2022,  the FBI is a partisan agency “actively working on behalf of the Democratic party”.  and Georgia Congresswoman Marjorie Taylor Greene has accused the nation’s top police force of inciting the January 6 insurrection. Texas Senator Ted Cruz has backed that theory.

And this conservative assault, which mirrors decades of liberal criticisms of the FBI, is working. More Americans than ever before believe that the FBI supports Democrats, not democracy. A Rasmussen poll from December 2021 showed 31% of Americans of both genders “strongly agree” that “there is a group of politicized thugs at the top of the FBI” and that the agency is `Joe Biden’s personal Gestapo.’” Following the Mar-A-Lago raid, when asked if the FBI is politically impartial, more than half of Republicans said no, while 34% believed that the agency “strongly favors the Democratic party.”

But ironically, the nature of the FBI hasn’t changed over time. It’s always been political—although now that American conservatives, and the Republican party, operate according to their own laws, the FBI is the enemy. 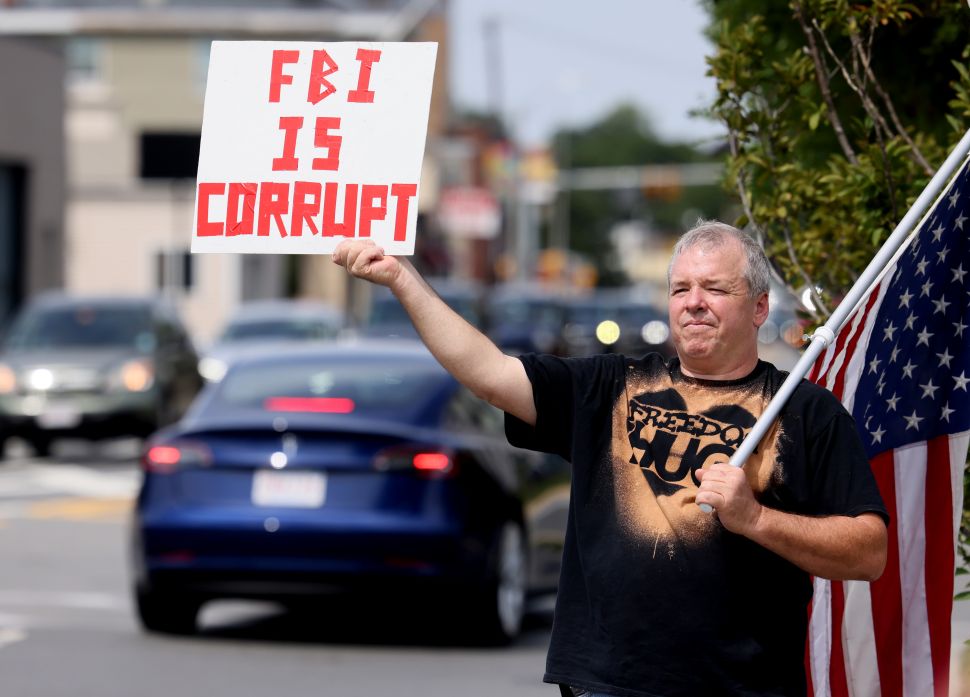