If you’ve logged on today, you may have seen people asking if Chris Pine was spat on by his co-star Harry Styles at the premiere of their movie Don’t Worry Darling, at the Venice Film Festival. Why would he do that? Why are people so wound up about this? What the hell is going on with this movie? I’m here to help.

Oh, god. That’s sort of a complicated answer. I’ll try to explain it to you as quickly as possible. It all started in April 2020, when director Olivia Wilde cast Florence Pugh, Shia LaBeouf and Chris Pine in her psychological thriller Don’t Worry Darling. Shia left the production, although the circumstances of his departure remain unclear  (more on this later). The  role was then re-cast with Harry Styles. Wilde and Styles appeared to be dating after she and her now ex-partner Jason Sudekis split. It is rumored that their affair began on set, before the news of hers and Sudekis’ impending split was public.

The plot thickens when Florence Pugh, usually a very chatty presence on social media, simply does not discuss the movie at all, which fans clock as odd. These fans begin to theorize that she is angry with her director and co-star Wilde, noting Pugh’s Instagram posts praise the production crew but never Wilde individually.

Around the same time, Wilde is served with papers by a process server from Jason Sudekis’ lawyers while on stage at CinemaCon. (This dramatic event is a side quest from our main tale here, so this is likely the last we will mention Jason Sudekis. Sorry to Ted Lasso fans.)

Wilde then begins to promote the movie, giving several interviews about how the film is  all about “female pleasure” and begins to really play up the sex scenes between Pugh and Styles. This can also be seen on Wilde’s Instagram, which has a photo of her on the set of the movie wearing a shirt that says “the future is female ejaculation.” In an interview with Variety, Wilde says only women have orgasms in Don’t Worry Darling. Cool, I suppose. Conversely, Pugh bemoans how her role in Don’t Worry Darling  has been reduced to the sex scenes in an interview with Harper’s Bazaar, saying “When it’s reduced to your sex scenes, or to watch the most famous man in the world go down on someone, it’s not why we do it. It’s not why I’m in this industry.”

In the same interview where she tallied up the orgasms by gender Wilde also claims she fired Shia LaBeouf. LaBeouf, (currently a Hollywood pariah after his ex girlfriend FKA Twigs made  abuse allegations against him in an interview with The New York Times) then reaches out to Variety to correct Wilde’s statement: he wasn’t fired, he quit. LaBeouf provided a video of Wilde asking him to come back to the production, where she snidely refers to Florence Pugh as “Miss Flo.”

After Olivia Wilde claimed Shia LaBeouf was fired from her movie ‘Don't Worry Darling,’ a video of her asking the actor to reconsider his decision to leave the film has leaked.

He was originally set to play Harry Styles’ role alongside Florence Pugh.
pic.twitter.com/zGSfm8N0Wj

Yikes! It starts to make sense why Pugh hasn’t spoken much about the film, employing a mature if mysterious  “if you don’t have anything nice to say, don’t say anything at all” tactic. Pugh’s representatives confirm that Florence will only be attending the red carpet of the movie’s premiere in Venice and will not be taking questions due to her filming schedule with Dune Part Two. Pugh shows up to the red carpet (looking fantastic) with her grandma as her date.

florence pugh on the red carpet of the venice film festival with her granny pat is the sweetest thing :’) pic.twitter.com/7sONz5BODg

At the press call for the movie itself, Harry Styles gives some incredibly Zoolander-esque answers about what it is like to act in a movie. Chris Pine is seen sort of dissociating during Styles’ sound bites, which you could easily play the Curb Your Enthusiasm theme over if you wanted. (If you do this, please email us.)

As the actors file into their seats for the movie’s premiere, Harry Styles sits down next to Pine. And it sort of, kind of, looks like Styles may have spat on him.

Personally, I watched the video and said “He’s not spitting. He’s holding his mouth in a British way.” For what it’s worth, Pine’s representatives have clarified no, that was not spitting.

Why did this rumor develop in the first place?

The drama from this set seems to be never-ending. I just wrote 700 words explaining it and that was the abridged version. After that, an editor removed still more words. People are going to want more of this, so now we’re telling tales of spit.

I would guess pretty soon, but the press cycle of all of these people hating or hooking up with each other has already outlasted my original prediction. It will only go away in a guaranteed manner if Lea Michele is seen reading a book upside down on the subway.

Certainly not the critical response to Don’t Worry Darling. It currently sits at 42% on Rotten Tomatoes. Shia LaBeouf certainly stands to benefit from his reputation being slightly repaired by the chaos, but that doesn’t seem to be happening.

Somewhat high. To repeat: Harry Styles didn’t spit on Chris Pine. But Olivia Wilde may have lied about firing Shia.

That answer is very dependent on your propensity for drama. The question is if there is any behind the scenes drama LEFT, but the movie won’t be in theaters until September 23, and Harry Styles still has five shows of his 15-night run at Madison Square Garden left between then and now. Who knows how his songs choices, onstage perspiration, or stage patter may be misinterpreted as coded commentary on the whole thing. (If you do this, please don’t email us.)

If you truly need more drama immediately, look into CM Punk’s post match comments after AEW’s All Out and message me on Twitter.

Is this bad for humanity? 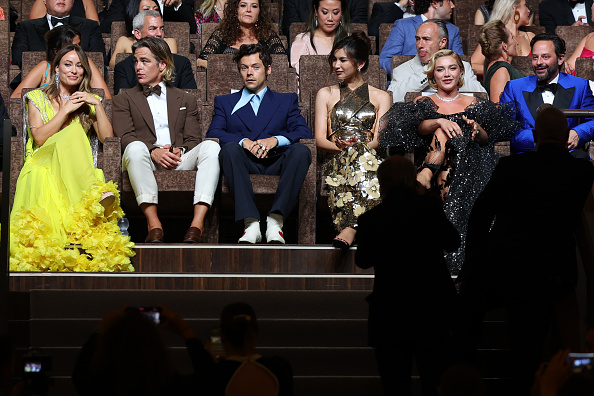