Okay, to start: usually when I write these it’s a subject I had, at the very least, peripheral knowledge of. Dave Matthews Band? Sure. Don’t Worry Darling’s behind the scenes drama? I work in media. Of course I read celebrity gossip. Pink Sauce? I’ve had food poisoning. I understand the concept. The list goes on. But this latest thing devouring mine, and your, timeline is about YouTubers and marital scandals and it involved the least amount of info I’ve had on a trend in a while. I read a lot of caps lock tweets for this. Strap in, my friends.

The Try Guys are a hugely successful YouTube channel. Like, massive following. They formed in 2014, when they were all Buzzfeed employees with the general concept of “Dudes trying stuff.” Their first video was “Guys Try Ladies’ Underwear for the First Time.” As of the writing of this piece, their YouTube channel has 7.83 million subscribers.

every 2-3 months there's some scandal about a guy named like Daiquiri Dan who i've never heard of and i look him up and it's like "Daiquiri Dan is an American YouTube personality. He is worth $46.3m, $15m of which came from becoming the spokesman for the food 'almonds' in 2018"

They’ve made mainstream news for a few things—notably, in 2018, the original Try Guys Eugene Lee Yang, Zach Kornfeld, Ned Fulmer, and Keith Habersberger left Buzzfeed to launch their own company, 2nd Try LLC and managed to maintain their intellectual property, striking a mutually beneficial deal. You can read more about that here. Like I said, they are massively, massively successful and have a legion of Gen Z fans.

Now, on to the trend itself: when you’re a YouTube personality, the line between public and private life is blurred. You’re selling yourself, your personality, and your life so you can rack up views, advertiser dollars, and patrons. So it goes! One of these Try Guys in particular, Ned Fulmer, really made his brand on being a Wife Guy. He really, really liked his wife, maybe in real life but absolutely in the canon of his Youtube channel.

Hearing that the try guy who cheated's brand was loving his wife and thinking it's hyperbole and then finding out that this is actual monetized content edited in-house and uploaded to an official company channel pic.twitter.com/1LdsFnRrIf

Apparently, the guy who performed (and monetized) loving (and being dedicated to) his wife was also cheating on her. This was first alleged on Reddit, with a fan saying they saw Ned making out with a woman in a bar. Fans then speculated it was with Alexandria Herring, who worked on a Try Guys side channel called Food Babies, and was thus Fulmer’s employee. She also has, or maybe had, a fiancee.

9) Will Thayer who is Alex from the Food Babies fiancée removed all his photos with her and does not follow her anymore. (his account is now back to private)

This has been somewhat confirmed, with Fulmer saying he had a “consensual workplace relationship,” though not specifying with whom.

Fulmer has also been let go from The Try Guys, who stated as such on instagram.

Fulmer’s wife and mother of their children, Ariel, has also responded to this increasingly depressing mess, asking for privacy.

Update: This post has been edited to add the following.

On October 3, The remaining three Try Guys uploaded a 5 minute video to their YouTube channel titled “what happened.’ They immediately said Ned Fulmer was no longer with the Try Guys, and clarified that they learned of the cheating allegations around labor day weekend, immediately contacting “employment lawyers, corporate lawyers, HR, PR, and more, in order to make sure we were taking all the necessary steps.” They went on to express anger and shock, while also saying they couldn’t disclose more details, given they were still sorting through a mess with a lot of legal ramifications. (Remember- Fulmer wasn’t just cheating, he was sleeping with an employee.) They also said Fulmer’s involvement in several videos recorded meant they were “unreleasable” and with “never see the light of day.” Group member Zach Kornfeld stated further “You will never see them and that is due to his involvement. That’s a decision that cost us lots of money. We will not be able to recoup that money, but it’s a decision we stand by proudly.”

You can watch the full video here:

That depends on if more cheating allegations drop. The Try Guys have an intense fanbase, with many drawing comparison to John Mulaney’s fans being vocally, scarily angry when he ended his marriage. (Not that Ned Fulmer’s marriage is presently over. But you get the drift: guy who makes a thing out of his nice vibe and his wife turns out not to be such a nice guy to his wife.) There’s a lot of armchair investigation into Ned’s actions, and a Twitter account dedicated to more allegations against Fulmer has popped up. If you want to browse it and feel depressed ennui, it’s here. Don’t say I didn’t warn you.

With the way things seem to be going, perhaps a divorce lawyer. The remaining Try Guys have gone on to say that they’ve lost revenue.

To the general public, at present, not much. Try Guys fans may feel feel they’ve been sold a lie, which is nothing compared to the way Ned’s wife, co-workers and friends probably feel.

Not really. This is depressing. Go outside. The weather is still nice. Text a friend. Pet your cat. Call your mom. Let’s make something good out of all this.

Is this bad for humanity?

An interesting philosophical question! Is investment in the personal lives of famous people bad for us? Is it easier to invest ourselves in the lives of others without their nuances instead of investigating our own personal struggles, fears, or insecurities? Or is it “some guy cheated, and a lot of people cheat?” Discuss amongst yourselves. For me, reading up on this and writing about it made me really see myself in this video.

Me as a millennial journalist :/ pic.twitter.com/SMGkZnQwLK

An inner life is a necessary one. Have a good week. 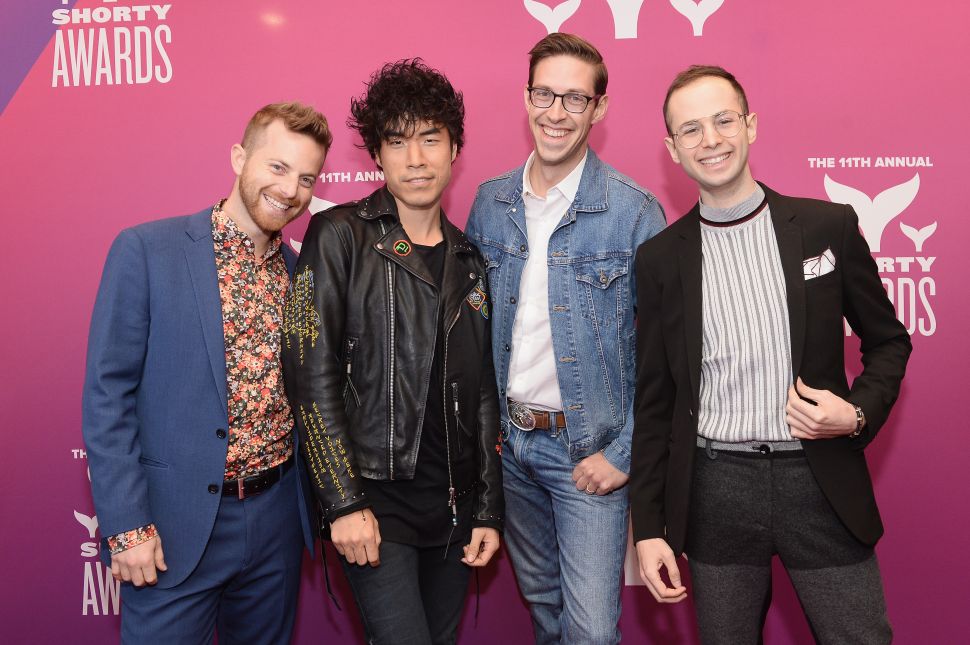