There have been three fires at Amazon warehouses this week, according to Amazon and officials with the Amazon Labor Union (ALU). One of the warehouses is unionized while another is seeking to join the ALU, and organizers say the retailer is using the incidents to stymie union activity.

Together, the incidents create additional friction between the retailer and the union, which have yet to begin negotiating a contract with workers at the JFK8 warehouse in Staten Island, who voted to unionize in April. Amazon maintains the National Labor Relations Board (NLRB) and the ALU “improperly influenced the outcome of the election,” and is still working to overturn it.

On Oct. 3 a fire broke out at an Amazon facility in Huntsville, Alabama; it was the second fire to occur at the warehouse in a week. That same evening a trash compactor machine used to process cardboard caught fire outside of JFK8, Amazon confirmed. An additional fire occurred in a compactor Oct. 5 at the ALB1 warehouse in Schodack, New York, southeast of Albany, where a union election is scheduled for next week.

“This is a company that doesn’t seem to care about worker safety,” said Seth Goldstein, an ALU lawyer. He likened the attention these fires are bringing to safety issues at Amazon to the Triangle Shirtwaist Factory fire in New York City, which resulted in sweeping changes to worker safety regulations.

There’s been no official statement suggesting any of the fires were intentional.

In the case of the JFK8 warehouse in Staten Island, Amazon used the incident to punish union workers, said Goldstein. After the fire, some 500 workers sat in the break room and demanded to be sent home with safety pay, according to a tweet from ALU president Chris Smalls. Workers had complained of having irritated throats and burning eyes, and at least one went to the emergency room after working their shift, the union said. In a TikTok shared by the Amazon Labor Union, workers can be heard yelling “send us home.”

Happening Now‼️ after a raging fire on ship dock 500 plus workers sat in the break room demanding to be sent home with pay for safety due to the smoke. @amazonlabor Lead organizes are now Marching on the Boss with hundreds of workers!✊🏽 #Alllaborwinter #ALU #UnionStrong pic.twitter.com/PsBrj27NKj

Amazon suspended an estimated 80 workers who were involved in the work stoppage, Goldstein said.

Authorities are actively investigating all three of the incidents, said Paul Flaningan, an Amazon spokesperson. In regard to the Oct. 3 fire at JFK8, he said Amazon asked night shift employees to report to their regularly scheduled shifts after the FDNY certified the building was safe. “While the vast majority of employees reported to their workstations, a small group refused to return to work,” and remained in other parts of the building without permission.

ALU officials said they’re currently planning to file unfair labor practice charges with the National Labor Relations Board over the suspensions. Concerted activity, such as refusing to work in unsafe conditions, is protected under federal labor law. The fires are the most recent incidents to raise red flags about worker safety at Amazon facilities. Over the summer the Occupational Safety and Health Administration (OSHA) confirmed it was investigating the deaths of three workers employed at Amazon facilities in New Jersey that occurred in a span of three weeks.

Amazon accused of stalling rather than negotiating with the union

Jordan Flowers, a co-founder and organizer with the ALU, said he viewed the suspensions as a way to hold up collective bargaining with the union at JFK8. Amazon challenged the results of the union election at JFK8, the first warehouse in the country to successfully unionize, but their objections were dismissed by the National Labor Relations Board (NLRB) last month. The retailer has said it intends to appeal that decision. “Amazon’s trying to stall as much as they can,” Flowers said. “Amazon doesn’t want to come to the table and negotiate, even though we’ve been recognized.”

The fire at JFK8 “underscores why we need Amazon management to respect our choice to unionize, to follow the law, and to stop their legal stalling and start negotiating with us over key issues, including our own safety and health,” Cassio Mendoza, the ALU’s communications director, said in an Oct. 4 statement.

In the case of the ALB1 warehouse in Schodack, organizing appears to have worked in employees’ favor, as Amazon sent home night shift employees with pay and canceled today’s day shift “out of an abundance of caution.” Goldstein suggested the response might have been less worker friendly had there been no worker organizing.

There’s not yet any indication the Schodack fire will affect the scheduled union election at ALB1, which is to take place Oct. 12-17. Prime Day, the Amazon mega sale that has drawn scrutiny for its connection to a worker’s death in July, is scheduled to take place October 11 and 12. 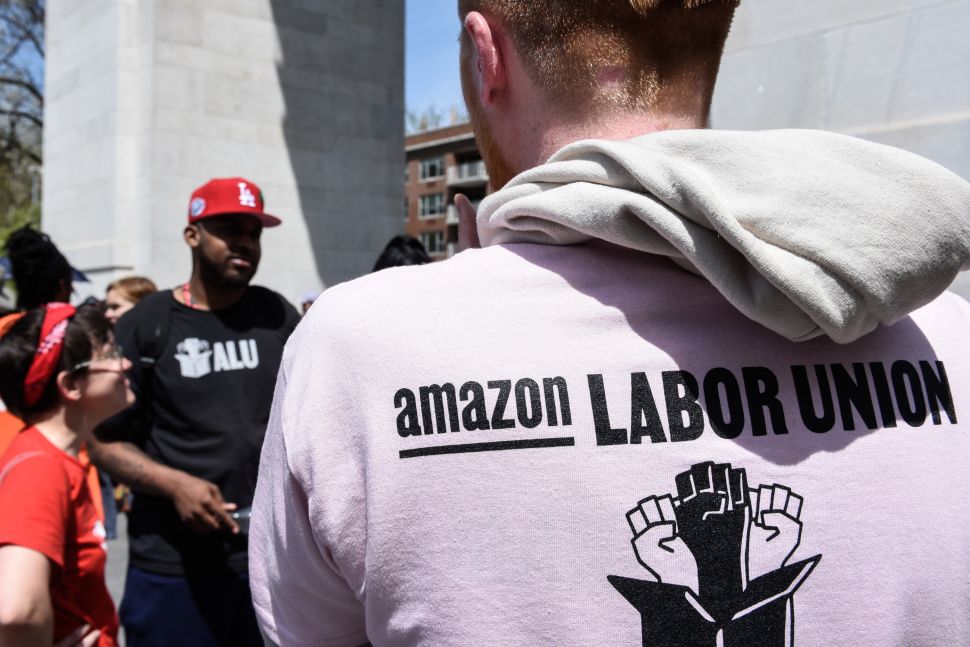