Depictions of Frida Kahlo appear nearly everywhere in the retail world, from t-shirts and sneakers to perfume and tequila brands, all bearing the likeness of the famed Mexican artist. Now, the commercialization of Kahlo has extended into the world of non-fungible tokens (NFTs), in a highly-criticized publicity stunt.

Martin Mobarak, a Mexican-American tech entrepreneur, claims he burned an original Frida Kahlo drawing at a Miami party in July in an attempt to bring attention to his launch of 10,000 NFTs depicting Kahlo’s artwork.

In a video detailing the event, Mobarak sets the drawing ablaze in an oversized martini glass, surrounded by party-goers, flamethrowers and a mariachi band.

“The painting was permanently transitioned into the Metaverse,” reads a website dedicated to Mobarak’s NFT endeavour, which claims the artwork in question is valued at $10 million. The NFT sales will supposedly benefit charitable organizations, such as the Autism Society and Children’s Craniofacial Association, according to Mobarak’s site.

One of the institutions listed as a donee, Mexico City’s Palace of Fine Arts, is refusing to accept proceeds from Mobarak, according to a press release from Mexico’s National Institute of Fine Arts and Literature. The organization also announced an investigation into the destroyed Kahlo piece. “In Mexico, the deliberate destruction of an artistic monument constitutes a crime in terms of the Federal Law on Archeological, Artistic and Historical Monuments and Zones,” reads the press release, which said the authenticity of the burned artwork has not yet been confirmed.

Questions of authenticity surround the drawing

The drawing in question, entitled Fantasmones Siniestros (Sinister Ghosts), comes from one of Kahlo’s diaries. Mobarak claims to have had the piece authenticated in July by curator Andres Siegal.

“The issue here is whether he just copied the drawing and burned it,” said James Oles, a lecturer specializing in Latin American art at Wellesley College. If Mobarak is attempting to raise money off a fake piece of art, he could potentially be subject to fraud, he said.

“But whatever he’s planned, he hit the lottery in terms of hits and publicity. For him it doesn’t matter if it’s real or not,” said Oles, who described Mobarak’s burning party and NFT collection as part and parcel of the hyper commercialization of Kahlo.

Burning her drawings, however, takes it to a new level. “Willful destruction of art is a very, very rare thing,” said Oles. While some artists destroy their own artwork, such as English artist Damien Hirst’s recent experiment where he burned artwork to replace them with NFTs, there are few examples of the purposeful destruction of famous artwork.

And Mobarak’s use of NFTs, which have recently seen a drastic fall in trading volume, adds to the confusion, according to Oles. “Why not just donate the drawing to charity and sell it at auction?” he said. “It’s all kind of tacky, and in fact, a lot of the commercialization of Frida Kahlo is tacky and pathetic and sad.” 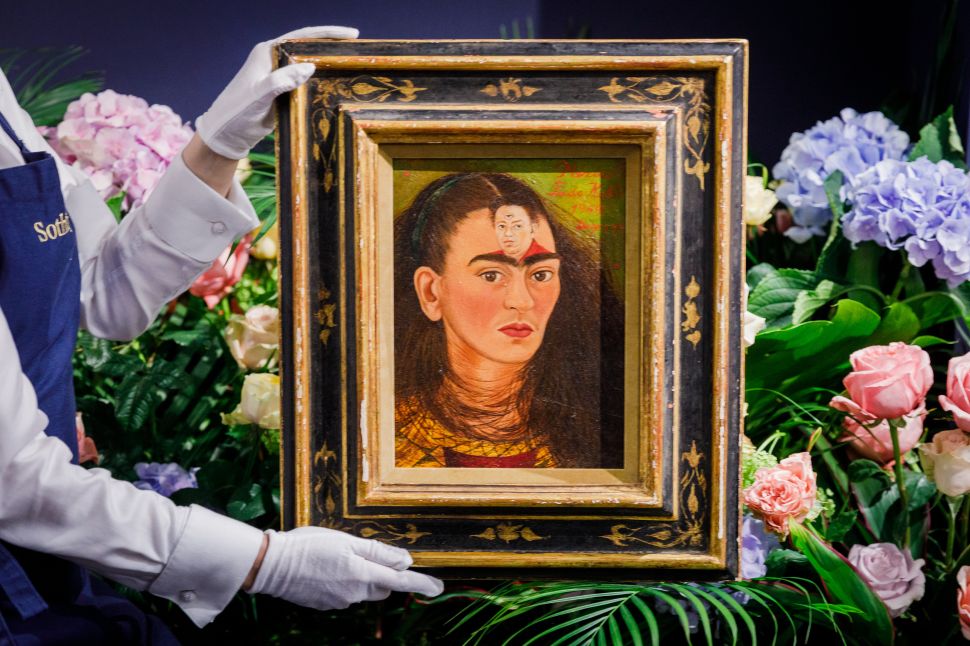