Venice’s 59th Biennale, “The Milk of Dreams,” opened last April placed under the sign of Leonora Carrington’s Surrealist namesake children’s book. A highly-anticipated event resuming for the first time since the start of the pandemic, the Biennale ostensibly anchors itself in feminism. Shepherded for the first time by an Italian curator, Cecilia Alemani (director and chief curator of New York City’s High Line), it also includes an unprecedented majority of women artists, showcased in various sites across the city.

In “The Witch’s Cradle,” one of the most exciting of such capsules located in the Biennale’s Central Pavilion, the format serves to discuss the facets of a “New Woman” and reintroduce the works of forgotten or overlooked women artists, such as Algerian-born Baya Mahieddine (née Fatima Haddad, 1931-1998) who started exhibiting in Paris at the age of 16, or Congolese-born Antoinette Lubaki (1895-unknown), trailblazing modern narration at a time of prevalent colonial massacres.

Yet together these capsules, as informative and educational as they are, sketch a confusing historical picture of Surrealism reduced to an assembly of various elements and qualifiers—freaky, uncanny, longingly nostalgic, mythological, proteanly spiritual, sexually fluid—which follow the Zeitgeist demands of inclusion and diversity but out of which a cohesive argument struggles to emerge. Is Surrealism just bold, queer, and awkward?

For instance, a cheerful documentary clip of a sensual and care-free dancing Josephine Baker (1906-1975) reminds of her avant-garde status in inter-war Paris, but is it necessarily “Surrealist” we wonder.

French philosopher André Breton, author of the Surrealist Manifesto (1924) had defined Surrealism as a “psychic automatism in its pure state, by which one proposes to express – verbally, by means of the written word, or in any other manner – the actual functioning of thought.” Basically, a revolutionary, nonconformist and emancipating project “dictated by the thought, in the absence of any control exercised by reason, exempt from any aesthetic or moral concern.” It’s about unearthing unconsciousness to unleash illogical, absurdist, debrided renderings of dream-like occurrences and obsessions that illuminate wider themes.

Alemani’s inclusion of historical pioneers such as Remedios Varo (1908-1963), Leonora Carrington (1917-2011) and Cecilia Vicuña (b.1948) demonstrates more convincingly than other participating artists that Surrealism is first about a renegotiation of reality, a fundamental jump and audacity, an unapologetic coup against impossibility that transcends the aesthetically weird and daring with a reflection on perception, existence, and alterity.

Vicuña, who received a Golden Lion for Lifetime Achievement along with Katharina Fritsch, reimagines oppressed agency and ethical cleansing through digestion in La Comegente (2019). In the artwork which the artist had to repaint from a 1970s original, a naked woman eats human beings, obliquely staring at the viewer, making us complicit of her dream to eat “evil doers” to “digest them, and defecate them for my shit to fertilize the land, so a new civilization can be born.” Yes please.

In Venice’s Arsenale away from the Giardini’s Central Pavilion, a generation apart, Cuban printmaker Belkis Ayón (1967-1997) and Mexican painter Felipe Baeza (b. 1987) explore the depth of eyes as multidimensional portals and reinterpret the soul-stirring quality of Varo-esque silhouettes—incisively fluid, eerily haunting, commanding in their silence.

In a similar vein bringing contemporary insights to familiar forms, the Macao-based art group “YiiMa” twists the spirits of Renaissance frescoes and Michelangelo’s Sistine Chapel ceiling with an art-historically inspired “Allegory of Dreams” in which scenes of Macao’s modern culture meet aerial eminence.

Otherworldly creatures are the frequent subjects of the Biennale’s artistic explorations—from the archaeological and promethean with Lebanese artist Ali Cherri (b.1976) to the transhumanist, kinetic experiments of Yunchul Kim (b.1970) in the Republic of Korea’s Pavilion and the organic, feathery, and slithering choreography of The Teaching Tree from Muhannad Shono (b.1977) representing Saudi Arabia. In this subconscious maze, the spectral giant figures of Congolese artist Sandra Mujinga invite to a symbolic speleological voyage to a lime-lit pseudo-graveyard, contrasting with the lush green of Precious Okoyomon’s garden (aptly entitled To See the Earth Before the End of the World, 2022) which features totem-like matriarchal characters gently overtaken by life-sprung climbing vines.

Sacred cosmogonies—reinvented, reinterpreted, reclassified—renegotiate the boundaries of the sacred, answering Alemani’s curatorial desires for a re-enchantment of a much-troubled world. Zimbabwean artist Portia Zvavahera (b.1985) dives into ancestral mythology in new works in which oneiric figures float, wrapped and elevated. In Kubatwa kwemazizi (Captured Owls) 2022, Zvavahera depicts a group of owls and kneeling humanoid supplicants in a womb-like envelope of a celestial darkness, mixing midnight and Prussian blues with plum pigments. This mystical cavernous gathering contrasts with the ethereal large-scale, sirenical folk paintings of Dominican artist Firelei Báez.

“The Milk of Dreams” has also provided a space for artists to situate their bodies in relation to their place in the world. “Paradise Camp,” hosted at New Zealand’s national pavilion brilliantly subverts the white gaze and Orientalism through powerful images of Sāmoa’s Fa’afafine, or third gender. And when not directed towards tradition and Paul Gauguin’s lurking 19th-century representations of Pacific women, other artists, such as Palestinian Noor Abuarafeh (b.1986) and Korean Myung-Hee Oh (b.1956) at the Palazzo Mora, respectively challenge the historical oppression of museums replicating colonial violence and the hurtful legacy of “comfort women” abused and tortured during Japan’s occupation of the Korean Peninsula (1910-1945).

In other firsts, this year’s Biennale further welcomes the first-time participation of the Sultanate of Oman, in a group exhibition which engages with human life as relic and memory; Ghana, superbly represented in “Black Star – The Museum as Freedom;” and the Kyrgyz Republic with Firouz Farman Farmaian’s shadows of post-Islamic Revolution displacement and ancestry, demonstrating an immense creative potential outside conventionally-charted Western projections, still vastly under-tapped.

If the Biennale’s historical capsules are about  staring at the rear-mirror, then one expects the rest of the exhibition to speak more expressly to the timely, and timeless if any. While individual artworks convey the blended notions of metamorphoses and oneiric contemplations, the Biennale collectively falls short of letting go from aesthetic and figurative constraints, of being the vessel of Breton’s “pure state” and of meaningfully challenging a rational order with themes so familiar and well integrated in nearly every major art event for the past decades.

The Biennale’s Giardini further exemplifies such deja-vus. Adjacent to the Central Pavilion features the big names: Simone Leigh (winner of the Golden Lion for Best Participant of the main exhibition), Sonia Boyce (winner of the Golden Lion for Best National Participation), as well as Zineb Sedira (Special Mention), respectively representing the national pavilions of the United States, Great Britain, and France in installations that broadly please without asking new, unformulated questions.

Much has been written about them which hark to talent of course, as well as asymmetrical access, given that most non-Western artists required several thousand additional steps to the Arsenale and in scattered locations off-site in the city to be seen, and days to see it all in an expensive tourist destination. This privileged geography—a convenient mini-Biennale within the perimeter of the Giardini which has received disproportionate mainstream attention—reinforces Western domination for busy visitors. And who realistically says no to a quick and efficient tour?

Now imagine art as an embrace and a punch, as an intangible bridge of solidarity and universality. Imagine, why not, France lending its national pavilion to Malagasy or Malian artists, or the US pavilion hosting Cuban or Iranian artists. Just imagine.

How does it feel, Surrealist? 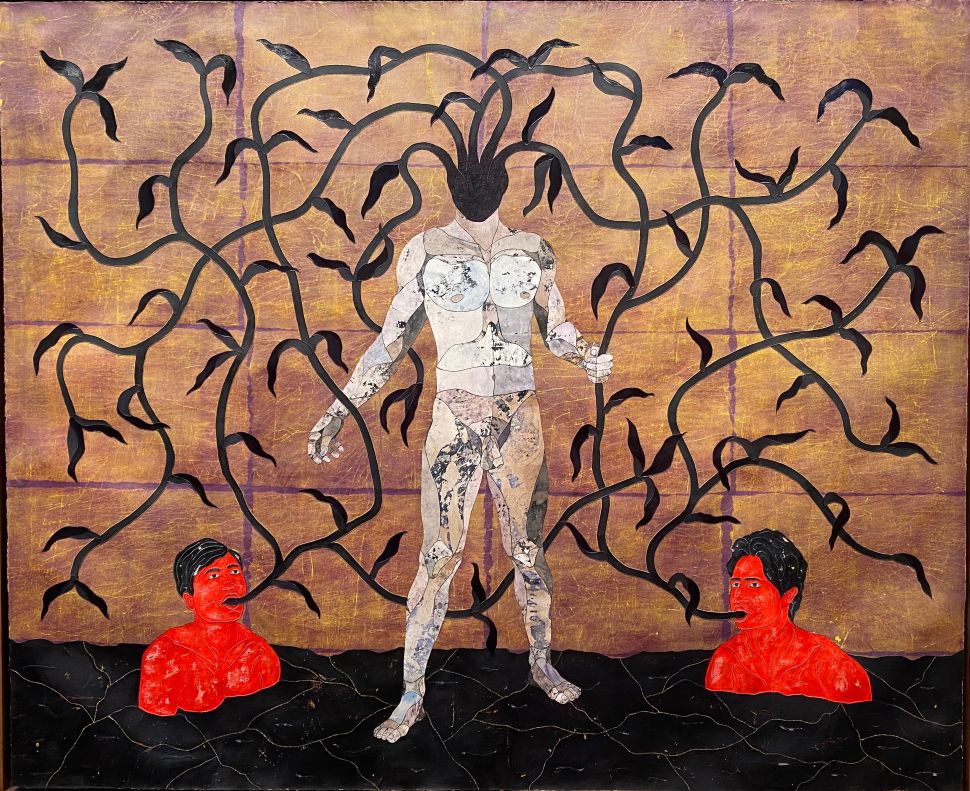