Two climate activists were arrested after throwing tomato soup on a Vincent Van Gogh painting hanging in London’s National Gallery and gluing themselves to the exhibit wall.

The demonstration, which took place this morning (Oct. 14), is the latest escalation in a series of protests across Europe which have art institutions rethinking security protocols and American museums worried the demonstrations may spread.

Today’s protestors targeted a glass-covered 1888 Van Gogh entitled Sunflowers, according to a statement from the National Gallery. “The room was cleared of visitors and police were called. Officers are now on the scene. There is some minor damage to the frame but the painting is unharmed,” wrote the museum, which confirmed the two demonstrators were arrested and the painting is now back on display.

The action was planned by Just Stop Oil, a U.K. climate group, and carried out by Phoebe Plummer, 21, and Anna Holland, 20. “Is art worth more than life? More than food? More than justice?” asked Plummer during the demonstration, after opening a can of Heinz soup and tossing its contents on the painting behind her.

🎨 Human creativity and brilliance is on show in this gallery, yet our heritage is being destroyed by our Government’s failure to act on the climate and cost of living crisis.#VanGogh #FreeLouis #FreeJosh #CivilResistance pic.twitter.com/gXXGLsi0ej

“This is not a one-day event, this is an act of resistance against a criminal government and their genocidal death project,” reads a press release from Just Stop Oil. “Our supporters will be returning—today, tomorrow and the next day—and the next day after that—and every day until our demand is met: no new oil and gas in the U.K.”

Just Stop Oil demonstrators have glued themselves to artwork in prominent U.K. museums over the past few months, targeting London’s Courtauld Gallery and Royal Academy of Arts, in addition to museums in Glasgow and Manchester. In Italy, climate group Ultima Generazione has staged similar protests at Florence’s Uffizi Gallery and the Vatican Museums, while German environmental organizers from Letzte Generation Group struck museums in Berlin, Munich, Dresden and Frankfurt over the past month. All three climate groups are funded by the Climate Emergency Fund, a California-based fund founded in 2019 by philanthropic millionaires to support environmental activism.

“They certainly are persistent. For a while there they were just touching the frame and not doing much else, but this is getting ridiculous,” said Steve Keller, a museum security consultant whose clients include the Smithsonian and Washington D.C.’s National Gallery of Art. The escalation of protests signifies a U.S. demonstration will likely occur soon, according to Keller, who said American museums have become worried and begun formulating response plans. “I know they’re concerned,” he said.

However, U.S. museums probably won’t be willing to make any significant security changes until they are targeted, said Keller. “Museums are very slow to react on something like this.”

Implementing strengthened security protocol is a delicate balance in museums, he said. Intensified screening measures are often rejected because they make for an unfriendly environment, while barriers around high-value artwork lessen the experience for average museum-goers. Keller recalled how barriers placed around artwork at the Uffizi Galleries, which took place in the early 1990s after bombings, “totally destroyed the visitor experience.”

Other possible measures include involving local law enforcement, monitoring social media and potentially offering to partner with climate protests to support their causes in a more productive way, according to Patrick Maughan, a security consultant at risk-management firm SRMC, which works with institutions like the Columbus Museum of Art and Pulitzer Arts Foundation. “Attacks on artwork are nothing to new to museums—at a minimum, they’d be amiss if they didn’t have protocols for dealing with someone trying to damage art,” he said. “I’d suggest they dust that back off and start there.”

Museums are an ideal target for protests because of their high profile and soft security, according to Keller. “Demonstrators are not likely going to be in a situation where someone gets shot by a security guard,” he said.

Despite the fact that art institutions so far haven’t visibly implemented any new security changes in light of the protests, Keller believes this will likely change soon. “If it happens three more times, museums may change their thinking about this.” 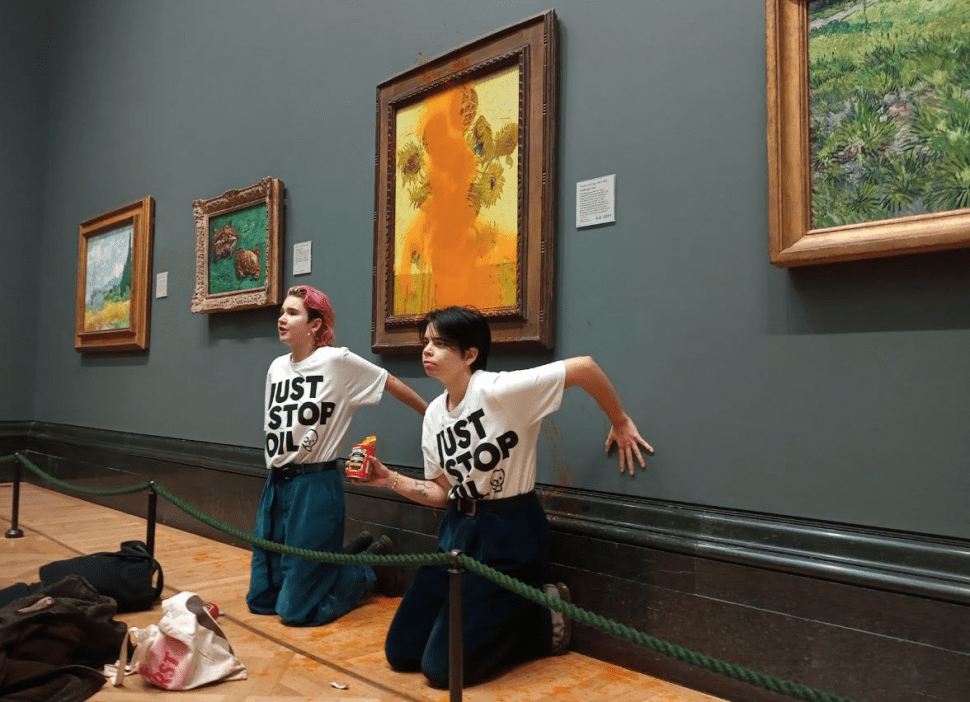