Murder mystery, romance, farce, war movie, political polemic with everything from racism to veterans’ care to American fascism in its sights — David O. Russell’s Amsterdam is a whiplash smorgasbord of a period piece that’s sure to draw the ire of People for the Ethical Treatment of Taylor Swift. (Amid a cast more stacked than a typical episode of The Love Boat, the pop star makes a brief but memorable appearance.)

It’s also likely to annoy the heck out of those who prefer their movies to stick to one tone and a singular purpose. The story of an inseverable bond between three unlikely friends (Christian Bale, John David Washington and Margot Robbie, each with a profoundly different approach to their character) Amsterdam Jekyll and Hydes its way from the blood-caked battlefields and recovery rooms of World War I to the heroin dens and society parlors of early ‘30s New York City, all the while singing and dancing to a strange tune no one else can hear.

It’s quite odd and discombobulating, but if you allow its turned up and persistent energy to sweep over you, and soak in the joy and righteous anger that animates its generous spirit, the end result is decidedly moving, and — at some points — even enthralling.

The story centers on a pair of Bowery-level fixers. Bale’s Dr. Burt Berendsen runs a bustling and barely legal medical practice that dispenses painkillers, prosthetics, and the occasional uplifting tune to his fellow trauma-addled survivors of the Great War; Washington’s Harold Woodman is a brocade-vested lawyer and the only soul looking out for Burt while Burt looks out for everyone else.

They team up to investigate the murder of the general (Ed Begley Jr.) who oversaw their battalion. Russell luxuriates in the gore of the autopsy that Burt performs with nurse and potential love interest Irma St. Clair (played with steely tenderness by Zoe Saldaña).

There’s even more splatter when the action shifts back in time to the war, where Burt loses an eye in combat. (Amsterdam earns its R rating through blood and guts, not sex.) One of the many incongruous elements of the movie is that it pays equal attention to the devastation of bullets and shrapnel as it does to the luxuriousness of evening gowns and perfectly painted nails.

The film gets its title from the time that Burt and Harold lived in a Holland flat with Robbie’s Valerie Voze, a socialite who fled New York society to nurse the troops and also create surrealist art out of the shrapnel she pulls from their shattered bodies. Here the tone gets dreamy and romantic, qualities imparted chiefly by the flowing, natural light filled-images of master cinematographer Emmanuel “Chivo” Lubezki, but also by the supple masculinity of Washington’s Harold, mellow as the month of May as he falls under the spell of playful, insouciant Valerie.

The Amsterdam sequence brings some much-needed stillness to the movie’s first half. And regular Russell co-conspirator Robert De Niro — playing the nation’s most decorated general, who is both the key to solving the murder and the focus of industrialists looking to foment a fascist coup— brings quiet authority to the second.

But things are still overstuffed and more than a little manic. You’ve got Mike Meyers and Michael Shannon as a pair of malfeasant ornithologists-cum-spies. The wide-eyed pair of Anya Taylor-Joy and Rami Malek are Valerie’s philanthropist relatives and super fans of DeNiro’s general. Andrea Riseborough is a revelation as the estranged wife who has pushed Burt out of the house. Chris Rock may be the most subdued of the bunch as a former member of Burt and Harold’s battalion who now serves as the latter’s right-hand man.

If it all sounds a bit contrived, it is. Russell has constructed a Rube Goldberg device of a movie, designed to delight, inform and enrage all at once. Growing out of the firm foundation of three lifelong friends are too many co-stars, whosiwhats and doodads to allow him to focus on his film’s core strength.

If it all sounds a bit exhausting, it is — but only a bit. Fortunately, the film’s considerable machinations are fueled by the absolute exuberance that it emanates.

Much of the sheer pleasure of making Amsterdam is evidenced in the stunning work of a team of craftspeople who are the film world’s equivalent of the 1927 Yankees. In addition to the Steadicam waltz of Lubezki’s camera, we are gifted lusciously exacting costumes designed by the legendary Albert Wolsky (an Oscar winner for All That Jazz) and the remarkably expressive makeup overseen by Nana Fischer (James Grey’s Ad Astra and his forthcoming Armageddon Time). And that’s just the tip of Amsterdam’s ever extending iceberg.

But the film is more than just intricately fabricated shelving for whatever colorful bric-a-brac Russell is able to dream up. Like The Fighter director’s best work, his latest vibrates with live-wire emotions before coalescing into a focused anger as it reveals itself to be the story of an attempted coup by a cabal of monied interests looking for a homegrown Mussolini.

Amsterdam arrives in theaters at the same time as The U.S. and the Holocaust unspools on PBS and as the country continues to contend with the fallout from a far-right insurrection. These relevancies are more than enough to give Russell’s frenzied contraption a fire in its belly to match the light in its eyes. 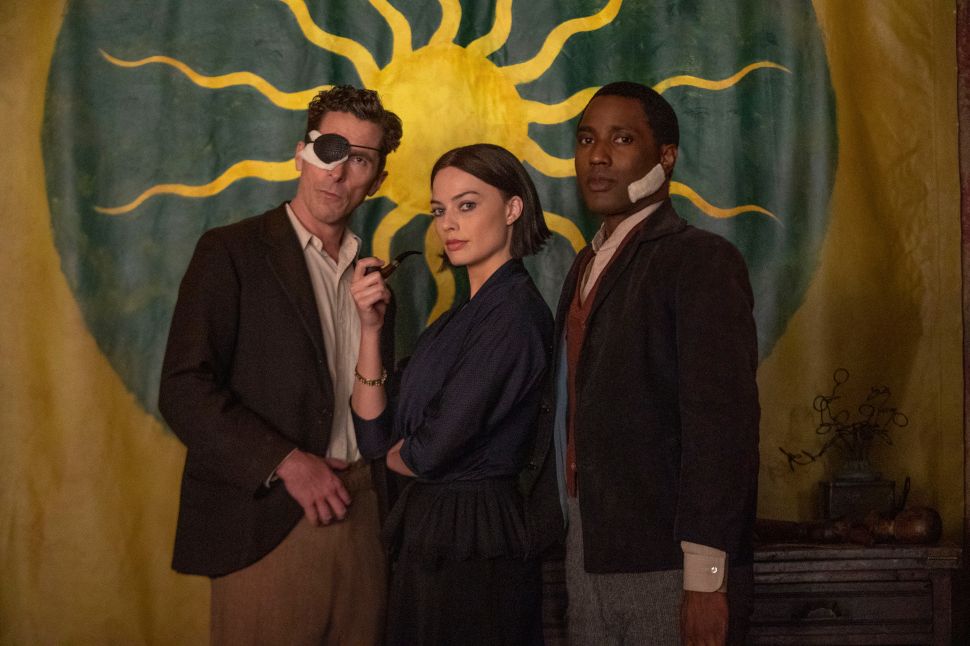