When we last visited the topic of Zelle, Senator Elizabeth Warren (with allies, but it’s clearly her fight) was at a standoff with the CEOs of America’s largest banks. At issue is one of the world’s largest payment systems, which Warren says has increasingly become the locus for fraud and scams. The banks counter that they refund customers where appropriate, and that the overall number of disputes about Zelle transactions is tiny.

Since that time, Warren’s office has released some startling research, and this week she called on the Consumer Financial Protection Bureau (CFPB) to tighten regulation on Zelle and other payment platforms.

More on that below, but a bit of background: Zelle is a free payment system now offered with most accounts at large US banks. It is operated by Early Warning Services (EWS), which has been around since the 1990s and is based in Arizona. EWS is owned by seven of the largest American banks: Bank of America, Truist, Capital One, JPMorgan Chase, PNC Bank, US Bank and Wells Fargo. As with many digital payment systems, Zelle experienced tremendous growth during the COVID lockdowns. In 2021, Zelle handled nearly half a trillion dollars ($490 billion), up 49% from the previous year. That makes Zelle smaller than PayPal, but more than twice as large as Venmo.

Obviously, financial fraud and consumer scams have existed throughout the history of money, but Warren charges that today Zelle is “the preferred tool of fraudsters and other bad actors who abuse Zelle’s instantaneous, easy-to-exploit transfers to steal from and defraud consumers.” Without disputing the charge, for which there is plenty of suggestive evidence, it’s not obvious why this should be the case. If anything, you might assume that a payment system owned by huge financial institutions would have better fraud protection than a relative upstart like Cash App.

How much fraud is on Zelle?

Regardless, Warren says that EWS estimates that $440 million was lost to fraud and scams in 2021. While that is a lot of money, it also represents 0.09% of Zelle’s total transactions. How should we view that number? It’s hard to make precise comparisons because this is not information that banks and fintech companies are eager to share. But in September, the Bank Policy Institute (BPI) issued a survey of eight large US banks, showing that disputed transactions of any kind on Zelle amounted to 0.06% of transactions. So Warren’s findings are higher than that, but the same BPI survey showed that 0.171% of PayPal transactions are disputed, and a disturbing 0.351% of Cash App transactions are disputed. These figures, while not airtight, suggest that Warren’s battle against Zelle could be profitably extended to other payment platforms, even if that might not provide the political theater of publicly grilling the CEOs of the largest banks.

Where it’s possible that Zelle is worse than its competitors is in reimbursing customers who have been ripped off. Zelle and its bank owners make an important distinction between “fraud”—in which a customer loses money in a way that is completely unauthorized—and “scams,” in which a customer is tricked into giving money through a false pretext. According to Warren, Zelle has a “zero liability” policy for fraud, but “makes no claim or promise to protect customers who are induced by bad actors into making payments.” This is a problem, Warren says, because such “spoofing” or “me-to-me” scams are proliferating, and consumers have no protection.

For example, Truist Bank told Warren’s office that in 2021 and the first half of 2022, its customers reported 7,223 cases of scams via Zelle, involving over $5.4 million. The biggest scam target Warren found is Bank of America, which reported 157,030 “authorized” scam payments, involving over $187.9 million in 2021 and the first eight months of 2022. Presumably, that money was not reimbursed, at least not initially; Warren says that based on the data she collected, overall only about 10% of scam money is reimbursed.

Will regulators crack down on Zelle and the banks?

Perhaps more troubling is Warren’s assertion that Zelle and the banks don’t even reimburse customers for a significant portion of unauthorized transactions. At PNC Bank, for example, an appalling 86% of fraudulent transactions were not reimbursed. (PNC did not return an email seeking comment.) Overall, Warren says, 53% of fraudulent Zelle transactions are not reimbursed. In general the banks have not commented on her report, although this week a Wells Fargo spokesman told CNBC: “We don’t believe the numbers in a recent report are done on a comparable basis, and therefore the analysis is misleading and inaccurate.”

Arguably, widespread bank failure to reimburse customers for Zelle fraud violates Regulation E of the Electronic Funds Act, certainly in spirit, although these rules are so new and untested that violation of the law’s letter could be debated. Warren’s letter to the CFPB, then, was to remind the agency that it has the relevant enforcement power. Back in July, the Wall Street Journal reported that CFPB was gearing up to force banks to reimburse more victims of Zelle fraud, though it doesn’t appear that anything public has happened since. Most of the big banks were slow to respond to Warren’s investigation; even after Jamie Dimon testified that he would have the data to her by the end of the day during the September 22 hearing, JPMorgan Chase never turned over its information. But if CFPB begins to crack down, it will be a lot harder for the banks to resist change. 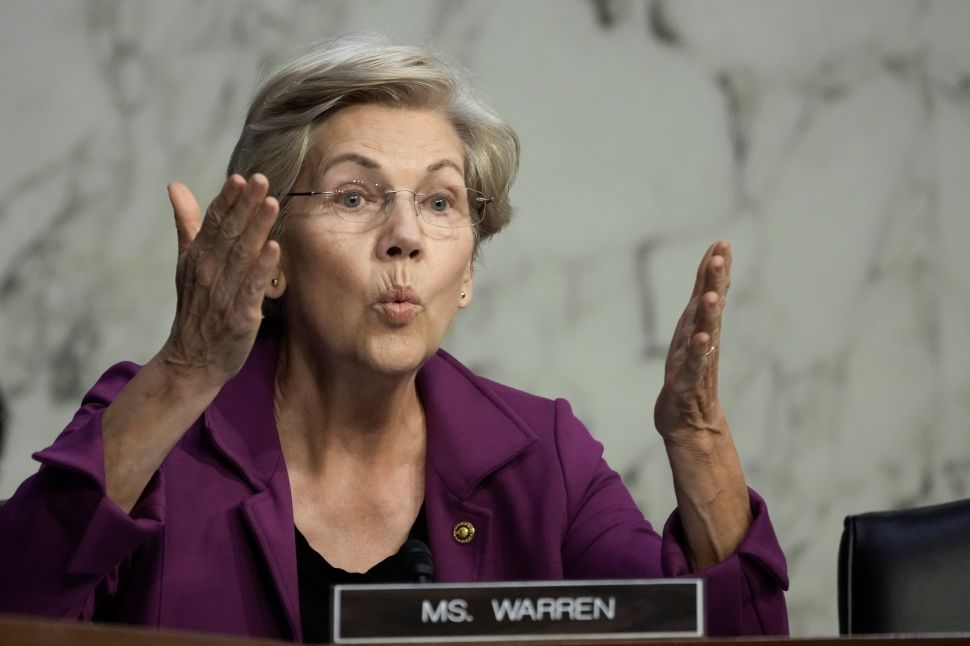