The original Gleneagles, located on 850 dreamy acres in Perthshire, is quite possibly the most famous hotel in Scotland. The sprawling property is known for its luxurious spa, award-winning golf course, Michelin-star restaurant and plethora of all the outdoorsy pursuits one would expect from a sumptuous hotel in the Scottish Highlands, from archery and clay shooting to falconry and horseback riding, to name just a few.

So when the beloved Scottish resort announced plans to expand with its first-ever city outpost in Edinburgh, anticipation—and standards—for the new hotel were rather high. It’s not always easy for a newly launched hotel to live up to the hype, but mere months after Gleneagles Townhouse opened its doors, the Edinburgh property has already exceeded those rather lofty expectations.

Intrigued? Here’s everything to know about Edinburgh’s most exciting—and luxurious—new hotel.

It’s a hotel and a members-only club, right in the midst of Edinburgh.

Gleneagles Townhouse occupies a rather special spot in Edinburgh; not only is it ideally situated right off of St. Andrew Square, but it’s also located in the building that was once home to the British Linen Bank, and later, the Bank of Scotland. The property, a member of Leading Hotels of the World, is both a luxury hotel and an exclusive members-only club, as anyone can book a stay (that is, as long as you can afford the price tag, with rates starting at over $600 a night), but certain enclaves of the hotel, such as the stylish rooftop bar, wellness center and first-floor lounge, are accessible only to guests and those who are members.

From the moment you step foot in Gleneagles Townhouse, it’s evident how much thought, effort and care has gone into the hotel. Design firm Ennismore spent nearly five years restoring and renovating the property, managing to keep original historical details, including wood paneling and fireplaces, intact while also updating Gleneagles Townhouse with all the modern amenities expected of a luxury hotel.

The interiors are sophisticated yet cozy, and while there’s a subtle resemblance to the original Gleneagles in the Scottish Highlands, this property’s decor has a more contemporary, city-appropriate edge to it. Gleneagles Townhouse is all about the seamless combination of the old and new, with original floor tiles, gold details, stone columns and elaborate moldings alongside freshly added textured fabrics, patterned wallpaper and antique lighting, with welcoming reading nooks and inviting velvet couches scattered throughout, as well as modern artwork, all by local Scottish artists, adorning the walls.

How are the rooms?

Part of the hotel’s charm and allure is surely its exclusivity and private atmosphere, as Gleneagles Townhouse is composed of just 33 rooms. All the accommodations are uniquely configured and decorated, though all are outfitted in a similar aesthetic, with jewel tones, plush bedding and sumptuously-appointed decor, including velvet seating, glittering light fixtures, tufted pillows and wood accent furniture. The attention to design continues into the bathrooms, which feature pristine forest green tiles and gold accents.

What about the food and drinks?

The Spence is Gleneagles Townhouse’s all-day restaurant, found on the first level of the hotel in the bank’s former main hall. It’s one of the most impressive spaces in the building, with an eye-catching domed ceiling, towering granite columns and arched windows. Elegantly upholstered furnishings, banquette seating, a large center bar and dark woods warm up the space, creating an airy yet homey atmosphere where guests can dine on seasonally-focused dishes from head chef Jonny Wright. The menu pays tribute to traditional Scottish fare, but with a distinctly modern twist, featuring options like baked beetroot, ricotta gnudi, stonebass tartar and Gigha halibut.

Then there’s Lamplighters, the rooftop bar that offers what just might be the best view in all of Edinburgh, with an entirely unobstructed look at the city. It’s lovely during the day, but I highly suggest stopping by for a drink in the evening, so you can take in the dreamy sunset vista. The cozy space, named in honor of Scottish poet Robert Louis Stevenson’s The Lamplighter, is exclusively open to hotel guests and club members, and serves inventive cocktails like An Island Voyage (gin, lemon verbena, marjoram, Pineau des Charentes, Lillet Blanc, kirsch and orange bitters) and small bar snacks.

The original Gleneagles is known for golf, country pursuits and, of course, its sprawling spa. While Gleneagles Townhouse is all about highlighting a sophisticated city experience, it’s also home to a rather impressive spa and wellness center, which is found on the lower level of the property. It’s definitely on the smaller side, but truth be told, I’m generally wary of hotels waxing poetic about spa and fitness facilities that are typically located in a glorified basement, but Gleneagles Townhouse is the rare exception. Yes, the gym is equipped with the requisite fancy Technogym machines, as well as several Pilates reformers and spin bikes, but there’s also a virtual platform, which is customizable to a specific scene (indoors sunset yoga becomes a reality when the sun is virtually rising on a wall-sized screen in front of you). There are only two individual treatment rooms, but there’s also an infrared sauna and a cryotherapy chamber, which is definitely worth a session if you’re trying to get rid of jet lag. After all, you’ll want to be refreshed and revitalized to make the most of your trip to the most stylish new hotel in Edinburgh.

*This stay at Gleneagles Townhouse was courtesy of the hotel. The views and opinions expressed are the journalist’s own.* 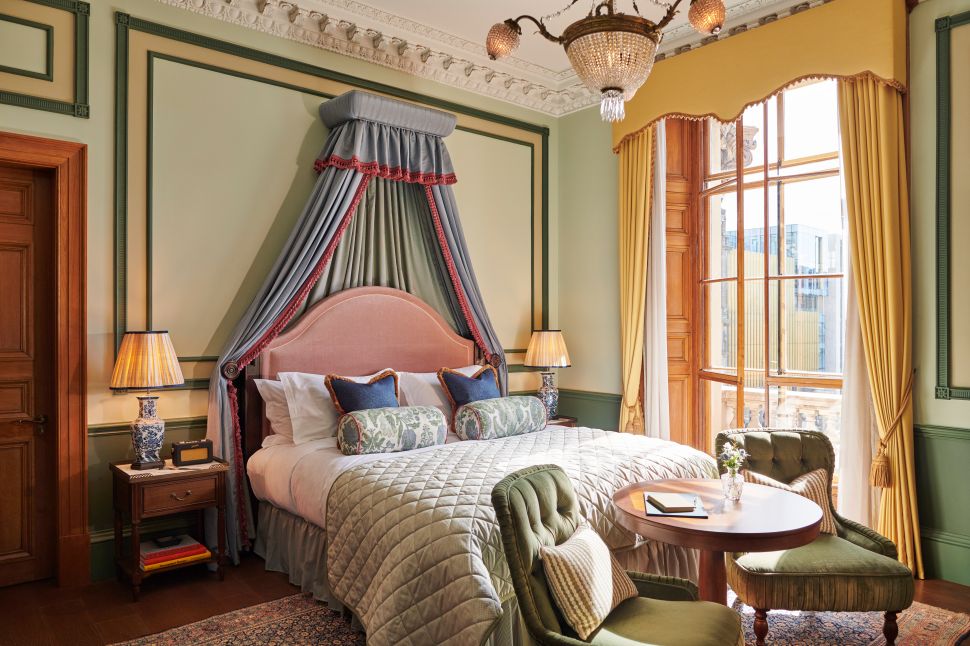