The art world has long valued protecting and preserving its cherished pieces, but in recent years instances of artists, collectors, and protestors destroying art has taken a foothold. The destruction, and the intentions behind it, come in many forms. Artists like Hirst and Banksy have burned and shredded their own art in public display, while others including art collector Martin Mobarak and climate protesters have wrecked others’ creations to serve wildly contrasting messages.

The conversation around destroying art is very dynamic, but when artists destroy their own art, it can be viewed as revolutionary. Damien Hirst has become a very publicized example after lighting up a thousand of his original pieces this month. This project, labeled “The Currency,” turned his long-standing career on its head.

Hirst first broke into the art scene as one of the Young British Artists of late 1980s. His works of preserved dead animals, spin paintings, and spot paintings amassed a large following over the course of his career. Earlier this month Hirst shocked his collectors when he gave them an ultimatum; after selling 10,000 NFTs connected to each one of his unique dot paintings, Hirst gave his buyers a choice— trade back in their digital token, or the corresponding dot painting will be burned.

Buyers made their choices, and Hirst followed through. He tossed 1,000 of his spot paintings into incinerators at his London gallery. A video of the event shows small crowds gathered behind the gallery’s roped barriers in awe as the artwork went up in flames— the first installment of later burnings to come. Out of the 10,000 NFTs sold, 4,851 buyers chose to keep their tokens and let the tangible paintings be set ablaze. The event was live streamed, where the world could watch Hirst announce the title of the piece with a smile before tossing it into the fire. Six incinerators were placed around the studio, tended to by several people in orange jumpsuits feeding the fires the original artworks.

This gallery installment was the first of several under Hirst’s “The Currency” project, six years in the making. In the same video, an interviewer asks Hirst questions as he cycles through laying art in the fire: “When did you decide you were going to burn your art?” Hirst replies to the interviewer “I decided that once I gave people the opportunity to choose between physical and digital art, I had to decide what to do with the physical art for all those who chose digital. So that was the point I realized I had to destroy it. And then when we created the NFTs, we burned them into existence.”

Hirst believes this project confronts the value of NFTs, and that it is art itself to involve human behavior in the fate of his own physical art. “We live in a world now where digital art now exists and I think it’s all just art.” He doesn’t seem to have a preference if people decided to keep or return their NFTs, “I like art, digital and physical, for different reasons.”

NFTs have amassed popularity in recent years as a way for consumers to own and sell virtual art. The value of physical versus digital art is still up for debate, and Hirst has no idea what the future holds. The incineration of a thousand of his dotted paintings is just the start of his project. He deems it necessary to burn all the original physical copies in this undertaking: “I think this has to be a part of the process to create truly digital artworks is to destroy the physical artwork. The two cannot exist at the same time.”

While Hirst’s burned paintings illuminate the divided reception of NFTs over physical art, others like collector Mobarak seek to control the NFT narrative by destroying the art of others.

Mobarak sparked outrage earlier this month after he claimed to burn an original Frida Kahlo artwork at one of his Miami parties in July. The Mexican-American tech entrepreneur said he burned the drawing to promote the launch of his 10,000 Frida Kahlo NFTs. The drawing, titled Fantasmones Siniestros (Sinister Ghosts), comes from one of Kahlo’s diaries and was purported to be worth $10 million.

The Miami event featured a fashion show, mariachi band, fire dancers, and philanthropic speakers. However, the most shocking display took place over the rim of a large martini glass. Mobarak assuages the crowd before his main event, “I hope that everyone that is here can understand it. I hope that everyone can see the positive side and the legacy.” He is handed a black protective case, and pulls out the framed artwork. After uncasing the drawing, he places it in the martini glass, lights a fire inside, and lets the flames lick away at the paper. Music and cheering blares in the background.

The conversations surrounding the spectacle are mixed with suspicion, anger, and praise. Although Mobarak claims the piece was authenticated back in July, some believe he could have merely burned a copy. If he did not burn the original, his act and subsequent NFT launch could be deemed fraudulent. Mobarak said the NFT sales will go to charity— including the Autism Society and Children’s Craniofacial Association— but Mexico City’s Palace of Fine Arts announced it will not be accepting these donations. The organization considers Mobarak’s destruction of an artistic piece as important as Kahlo’s a crime.

Mexico’s leading cultural organization has recognized the potential criminality of his act, too. Mexico’s National Institute of Fine Arts and Literature launched an investigation shortly after Mobarak’s video circulated. The institute released a statement addressing the stunt: “In Mexico, the deliberate destruction of an artistic monument constitutes a crime in terms of the federal law on archaeological, artistic and historical monuments and zones.” The burning of this national treasure has angered many, and only the investigation will tell if his actions are considered criminal in Mexico.

So why did Mobarak supposedly burn the original Kahlo drawing? Some believe this could be one huge publicity stunt, after the steep decline of NFT trading in the past year. This could also signal a growing trend of burning physical copies of artwork to make profit in the NFT space— one display of many to legitimize the power of the Metaverse.

This creates a disconnect within the ethics of art destruction. When the intent turns to capitalism— profiting from the demolition of art to ensure exclusivity within the world of non-fungible tokens (NFTs)— the purpose of art is conflicted. Destruction can also be used to critique the monetary excess within the art world. It can be seen as artistic expression itself when artists involve human behavior in the fate of their creations.

Art profitability has created a platform for making money, and critiquing those that do. Banksy has flipped the capitalist narrative by shredding his own art, attempting to subvert the omnipresent greed in the art trade.

Banksy— famous British street artist turned public mystery— is well known for his graffiti artwork which bring light to social issues such as ending war, the refugee crisis, and the mass hoarding of wealth. One of his most recognizable works is the Girl with Balloon, a stencil drawing of a young girl reaching out to a heart shaped balloon swept up in the wind. Collectors scrambled to buy the piece when it went up for sale at Sotheby’s 2018 auction, and was secured via telephone bid for $1.4 million.

As the auctioneer pounded the gavel announcing it as sold, a loud beeping noise sounded from the golden frame encasing Girl with Balloon. The audience turned their heads in surprise as the drawing slipped down through the frame, shredding itself from the bottom. Half of the artwork was hanging in slivers below the bottom.

Banksy posted on Instagram shortly after the auction, clarifying that “Some people think the auction house were in on it, they weren’t.” In actuality Banksy had the stunt pre-planned for years in case it ever did go up for auction. In a video he explains his process behind shredding Girl with Balloon. He had it planned years in advance, building a shredder into the ornate frame, test running on replicas. The shredding of the famous piece spoke on the overindulgence of art trading; Banksy has always been resolute that his works would be free to the public, and has frequently hit back at greed centered in the art trade.

Banksy renamed the shredded Girl with Balloon piece to Love Is in the Bin, and in an ironic turn of events, the half-destroyed artwork would return to Sotheby’s auction in 2021. This time, set at a much higher value. The half-shredded artwork was sold for $25.4 million— a record-breaking sale for Banksy. Although a feat for Sotheby’s and Banksy’s art appraisal, the reauctioning is telling of the exuberance Banksy once tried to critique.

Similar to Banksy’s criticism of capitalism, climate protesters have recently defaced famous artworks in pursuit of a wider societal message. This October two Just Stop Oil activists threw tomato soup at Van Gogh’s famous Sunflowers painting at UK’s National Gallery, gluing themselves to the wall and yelling their protest against fossil fuel extraction. One asked the stunned gallery audience, “Is art worth more than life? More than food? More than justice?”

And it happened again on October 23. Two climate protesters with Last Generation threw runny mashed potatoes onto Monet’s Grainstacks at Germany’s Museum Barberini. The demonstration echoed the same sentiments, as one of the protesters told museumgoers “We are in a climate catastrophe. And all you are afraid of is tomato soup or mashed potatoes on a painting.” In both the public defacing of Sunflower and Grainstacks, the protesters were arrested. The paintings incurred no damage, and are still on open display.

The noticeable traction behind destroying art has been met with varied reactions, controversy and bewilderment alike. And audiences largely dominate debate over its harm or ingenuity. Some artists and collectors destroy for capitalistic gain, while others destroy to critique capitalism and destructive consumption itself. Regardless of motive, the damage is always seen as a core part of the artistic process. There’s no telling if this trend will continue at this fast pace— only that the ability to destroy art is becoming increasingly inseparable with ownership and tradable value. 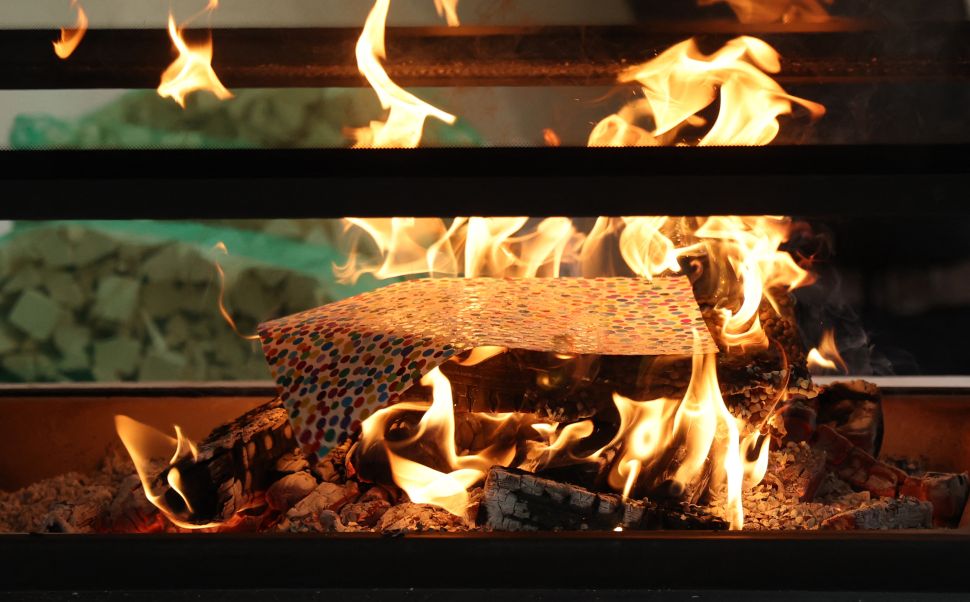