Leopoldstadt, the new (and, basically, true) Tom Stoppard play, takes its title from the Jewish neighborhood in Vienna where the play’s fictional facsimiles of Stoppard’s family live—until they don’t.

Emotional chords like these haven’t been struck by a play since The Diary of Anne Frank. In Week One at the Longacre, Leopoldstadt outgrossed all Broadway newcomers, and, with the London production having tucked an Olivier under its belt for Best Play, it’s in good standing for a comparable Tony, where Stoppard reigns champ via Rosencrantz and Guildenstern Are Dead, Travesties, The Real Thing and The Coast of Utopia.

The play sprawls out over five different epochs (1899, 1900, 1924, 1938 and 1955) in five different acts that run—intermissionless!—two hours and ten minutes. The first three acts/scenes almost qualify as domestic comedy, replete with flashes of Stoppard’s civility, intelligence and well-known wit. There is much to occupy the Jewish mind of these characters—like assimilating for a better seat at the business table. All are oblivious to danger signs and dark war clouds forming. Then, inescapably, there’s the sound of glass shattering, followed by an insistent Nazi knock at the door. Before they know what has hit them, the residents have been told their beautiful apartment has been seized by the state and they have less than a day to gather up their belongings and head for the train station.

When Leopoldstadt debuted in London — at the end of January, 2020 — there was an intermission at this point. “I always wanted to cut that intermission,” director Patrick Marber declares with some justified pride. “We did it in London during the pandemic. When we originally opened there, we opened with the intermission. Then when we brought it back when the theaters reopened in London, we cut the intermission—and it was all the better for it.” The dramatic deck had been stacked in such a way that he easily got away with it. A bathroom break is the last thing one is thinking about then.

In 1999, Marber — a playwright, actor and comedian himself — made a double debut when he hit Broadway, directing his own play, Closer, a romantic rectangle where a quartet of strangers, caught between desire and betrayal, swap about.

These days, instead of a cast of four, Marber is marshaling about the stage closer to ten times that. The exact, slightly staggering number is 38, but he has never considered how many other characters are produced from that number, what with wigs, double-casting and aging techniques.

He confesses that the hardest thing for him to block out is the big ensemble scenes (although he does them quite creatively). “The ones in 1899 and 1938 are scenes where you need and want to see everyone at once on stage. It’s a play where you go from the many to the few, so you have to experience the many in order to experience the few. The idea is that the production should feel like a series of photographs that you think about. The family album in the play is very important.”

By the time the final scene (1955) rolls around, the number of characters has shrunk to three, and one of those is new to the play: Leo Chamberlain, a stand-in for Stoppard himself. Because Chamberlain’s mother had scrupulously avoided the subject (as Stoppard’s own did) , he did not learn of his Jewish roots until he was in his 50s—and he sets up an interview with the last two lingering leaves of his family tree.

Before these anguished revelations took the form of a play, Stoppard reported them in a 1999 Talk magazine piece. “I didn’t really talk to Tom about it because I had read the article,” said Marber. “I do know a bit about his mother and his relationship with her. She lived to a ripe old age.”

Marber and Stoppard have been besties since the mid-‘90s. “He was on the board at the National Theater when my first play, Dealer’s Choice, was presented there,” said Marber. “He was an early supporter of my work. It was a big thrill getting to meet him—me in my 30s, him already a legend, someone that I had studied in university. Over the years, we had lunches and talked about our respective plays.”

The thing that seemed to cement the friendship was the fact that both were playwrights and, thus, spoke the same language. Because of this, Stoppard picked Marber to direct the revival of Travesties, first on the West End and later on Broadway. “Travesties is really not so different than Leopoldstadt,” Marber contends. “We’re in Europe, there are lots of time-jumps, and it’s people figuring out how to survive.” Marber’s success with Travesties encouraged the playwright to give him a shot at Leopoldstadt, arguably Stoppard’s most sensitive and personal effort.

“I never imagined, if this play went to New York, that we’d be able to afford to bring over the original cast,” Marber said. “We brought over four actors from the London production, and two of them already had passports—but I’m thrilled with the company I have inherited. They’re really terrific.

“The vast majority of the cast is Jewish. I think Jim Carnahan, the casting director, has cast it very, very well, if I say so myself. There are a lot of watchable actors on that stage. Some have 10 or 15 lines, and it makes the impression very different and requires a particular kind of selfless actor. It’s an incredible company. They’re actors coming on, doing small parts and doing them brilliantly.”

He beams proudly over David Krumholtz’s performance of Hermann. “He hasn’t been on stage in 30 years, and you’d never know it. The last play he did on Broadway was Conversations with My Father in ’92. His deciding to come back, after a great career in film and TV, was a brave act.”

Then, there’s Betsy Aidem, who seems to have spent most of 2022 as a matriarch warding off antisemitism in foreign lands. Earlier, in Prayer for the French Republic, she chucked a lucrative job in Paris when her son comes home bloodied and battered for wearing a yamaka. In Leopoldstadt, she heads a Jewish clan dangerously complacent and drifting toward the chaos of World War II.

“It’s inevitable that people are going to compare because I’m playing two Jewish matriarchs,” she allows. “But the countries are different, the acting styles are different. Stoppard’s language is very different from Josh Harmon’s. Marber and David Cromer are very different kinds of directors. I feel, I hope, my matriarchs are very different people. They’ve a tremendous sense of command of their family, but Prayer was a matriarchal play, and Leopoldstadt is a patriarchal play. I was the active engine of Prayer. I’m not the engine here. Men determine what happens in Stoppard’s play.

“I was aware doing Prayer that I had this responsibility to honor all the great aunts I lost in the war. When I go through the photo album I inherited when a cousin died, I can’t identify most of the people in it. It just pains me that I don’t know, and I know that’s a person beyond your lifetime.”


Marber, she finds, is fun to work with. “First of all, he’s a performer—a clown—and makes the rehearsals collaborative and fun. He’s a wonderful captain with a twinkle in his eye and a great sense of mischief. He changes his mind and throws things at you so you have to stay on your toes.”

He also can throw curves at the press. Asked the hackneyed question of what he wants audiences to take away from Leopoldstadt, he’s very direct: “The desire to tell other people to see it.” 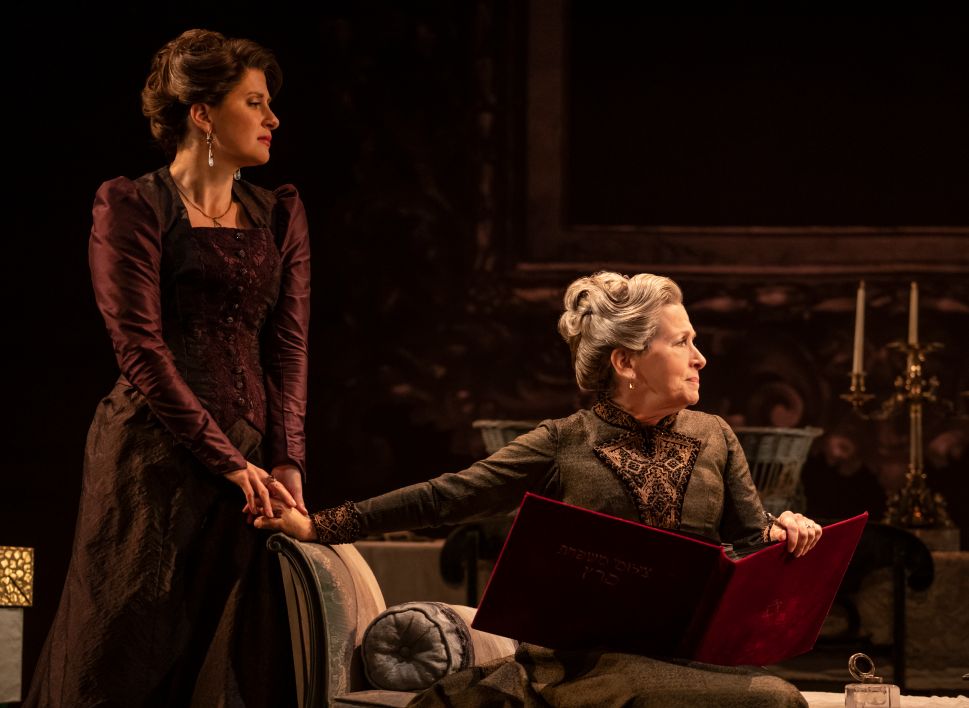