Semafor, an online publication covering a range of topics from climate change to technology, launched today (Oct. 18). Created by former New York Times columnist and Buzzfeed editor Ben Smith and Bloomberg Media ex-CEO Justin Smith (who are not related), Semafor seeks to combat news bias and misinformation by sectioning out different viewpoints in its articles.

Of all times to start a publication, the present news economy isn’t favorable. Inflation is at its highest 12-month point in decades. Publications are “ferociously” competing for eyeballs and advertising dollars, said Craig Huber, media analyst at Huber Research Partners, a media research firm. Smith and Smith are in some sense leaving the cushion of legacy media for the Wild West of a startup—not to say the New York Times and Bloomberg haven’t had their own struggles in the market, but they are still more secure than a startup. The question of Semafor’s success relies upon if audiences will buy into its alternate news sharing model enough to appeal to advertisers in a tumultuous market.

“Semafor’s mission is to address the very real consumer frustrations of today, including trust in news, bias and polarization,” said a Semafor spokesperson. “Brands and clients are also looking for opportunities to solve these issues.”

The demand for clear, unbiased information exists, because media outlets haven’t been supplying it, even the New York Times, said Luis Cabral, economics professor at New York University. At the same time, there’s a creeping shakeout in digital media, where a fraction of players will drop out, as they have from the newspaper industry over the last two decades, he said.  From an economics standpoint, “It’s not the right moment [to start a business]. It’s an extremely risky proposition,” he said.

The startup will finance itself with ads and sponsorships, and it will offer subscriptions in the future, said Rachel Oppenheim, chief revenue officer. Semafor says it has eight corporate partners. The site currently displays ads from four companies, including Mastercard and Verizon.

There’s still money out there in advertising, and digital advertising is holding up better than other segments, said Brian Wieser, a business executive at GroupM, a media investment group. Digital advertising grew by 30 percent last year alone. When a startup first launches, advertising partners can often come from preexisting relationships, he said. And startups don’t actually need too many advertisers to start successfully.

Semafor isn’t going to be a huge company its first year, and it isn’t actually relevant how the broader industry is doing, he said. Starting a business in a downturn could actually benefit Semafor, because its competitors have likely “taken the foot off the gas,” he said. “It’s corporate habit.” 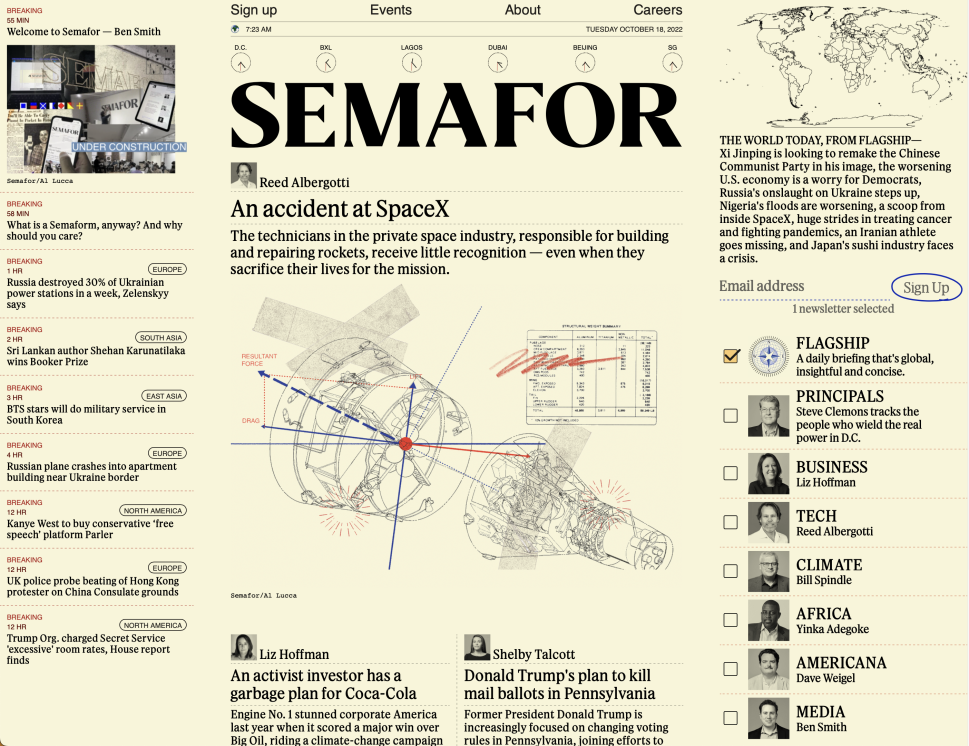