The U.S. may soon be faced with museum protests akin to London’s recent Van Gogh soup incident. The protestors throwing food items at paintings and gluing themselves to museum walls aren’t just a European phenomenon but part of a global network of climate activists that includes an outpost in the U.S.

The demonstrators all belong to the international A22 network, a coalition of 11 environmental groups located around the world in countries from New Zealand and Australia to Switzerland and Sweden.

All of the organizations are primarily funded by the Climate Emergency Fund, a California-based fund created in 2019 by a group of philanthropic millionaires including Aileen Getty, granddaughter of oil tycoon J. Paul Getty, and Rory Kennedy, daughter of Robert Kennedy. Adam McKay, director of Don’t Look Up and The Big Short, joined the fund’s board of directors in August after pledging $4 million to the fund, while producer Abigail Disney, whose great-uncle is Walt Disney, has also pledged $200,000 to the organization.

“We help fund these courageous groups’ recruitment, training, and capacity-building efforts,” reads a statement from the Climate Emergency Fund, which claims this money only goes towards legal activities. According to its website, the organization has funded 39 different groups with $4 million so far in 2022. In August, the fund’s executive director Margaret Klein Salamon told the Observer that the Climate Emergency Fund has given A22 groups Just Stop Oil and Ultima Generazione $920,000 and $80,000, respectively, since 2020.

The A22 Network got its name after the 11 member groups launched parallel protests in April of 2022. Now, the network is presently engaged in an “October Uprising,” a series of disruptive climate protests occurring across the globe this month. Perhaps the most publicized of these protests occurred Oct. 14, when two activists from U.K. group Just Stop Oil threw tomato soup on a Vincent Van Gogh painting hanging in London’s national gallery. The activists subsequently smashed a chocolate cake into a wax model of King Charles III at Madame Tussauds wax museum.

The media attention given to these incidents has “made it so much easier to recruit new people,” according to Alex de Koning, a Just Stop Oil spokesperson based in London. “I can’t think of a better action that causes that much publicity without doing any damage,” he said. “And even if a frame does get damaged, we need to ask ourselves what is more important.”

Just Stop Oil has also protested throughout October with daily roadblocks and marches outside of 10 Downing Street, said de Koning, 24. “Although people hate it right now, they might look back at it and think that was necessary,” he said. The group’s members, ranging from 15 to 83 in age, are focused on various aspects like recruitment and strategy, and hold weekly talks in cities across England. According to de Koning, seven members are currently in jail, and the Climate Emergency Fund’s resources are essential for financial and legal support to help maintain the group’s momentum.

De Koning, who is currently taking time off from studying for a Ph.D to focus on the group, said that while Just Stop Oil has done several other demonstrations, including disrupting soccer games and Formula 1 races, the museum actions have by far been the most successful. “It’s also inspired others,” he said.

Other A22 groups have launched similar museum protests, such as German group Letzte Generation, members of which threw mashed potatoes at Claude Monet’s Les Meules at Potsdam’s Museum Barberini on Oct. 23.

We make this #Monet the stage and the public the audience.

If it takes a painting – with #MashedPotatoes or #TomatoSoup thrown at it – to make society remember that the fossil fuel course is killing us all:

Then we'll give you #MashedPotatoes on a painting! pic.twitter.com/HBeZL69QTZ

And Italy’s Ultima Generazione organization has held numerous museum demonstrations at places like the Uffizi Galleries or Vatican Museums, where activists glued themselves to the frame or base of prominent artwork. “If something works well in a campaign, we share it,” said Chloe Bertini, 24, a member of the group.

Many of the A22 groups were started by former members of Extinction Rebellion, a UK-based environmental movement, according to Bertini. Throughout the October Uprising, Ultima Generazione has primarily focused on roadblocks throughout streets encircling Rome. “I have a lot of other passions and things I’d rather be doing,” said Bertini. “But I have the power to use my body to do something, and the kids of the future don’t.”

While Bertini said some art-lovers have begun supporting the museum protests, overcoming initial waves of outrage, she emphasized the difficulties of protesting. “It’s not easy, whether it’s the insults on the street or difficulties within the organization.”

Members from A22 groups have weekly meetings via Zoom, sharing strategies and tactics which have been successful, according to Nora Swisher, a member of Washington, D.C.-based group Declare Emergency. Despite the fact that the groups have missions specific to their country—Declare Emergency, for example, is focused on getting President Joe Biden to declare a climate emergency and halting fossil fuel extractions on federal and Indigenous lands—the 11 organizations all share the goal of active disruption.

Swisher, 32, was arrested during one of the group’s most recent protests, a roadblock on a highway in Maryland. While Declare Emergency primarily focuses on roadblocks, Swisher said the group may adopt the museum strategies used by its European counterparts. “We are open to considering all non-violent tactics,” she said.

An ordinary person with a message for @POTUS:

"We need to stop the fossil fuel death project. @POTUS please #DeclareEmergency and take care of this. We NEED TO STOP THIS MADNESS."#A22Network #EmergencyMode #ClimateEmergency pic.twitter.com/AwSxAdbNyb

According to Swisher, the group actually attempted a protest on Oct. 1 at Washington D.C.’s National Gallery of Art, demonstrating in front of photography of logging. “It didn’t go as viral,” she said.

Reactions to Declare Emergency’s protests typically focus on how the group is inconveniencing the lives of ordinary people, making them late for work and potentially interrupting emergency care, said Swisher. “That’s true, we do impact lives. But we think it’s important to do it anyways, because the disruption from climate change is going to be way worse.”

For another A22 member group, Norway’s Stopp Oljeletinga, halting fossil fuel production is the primary goal. “Norway is one of the top world producers of oil and gas,” said member Astrid Rem, 31. The group has also focused on roadblocks, and recently set off the fire alarm at an oil convention in Stavanger where Elon Musk was in attendance. While the protestors haven’t yet begun demonstrations in museums, according to Rem, the idea isn’t off the table.

“This is the next step, being really annoying and disrupting normal day-to-day life. We’re hoping that people being so annoying will make others think,” she said. 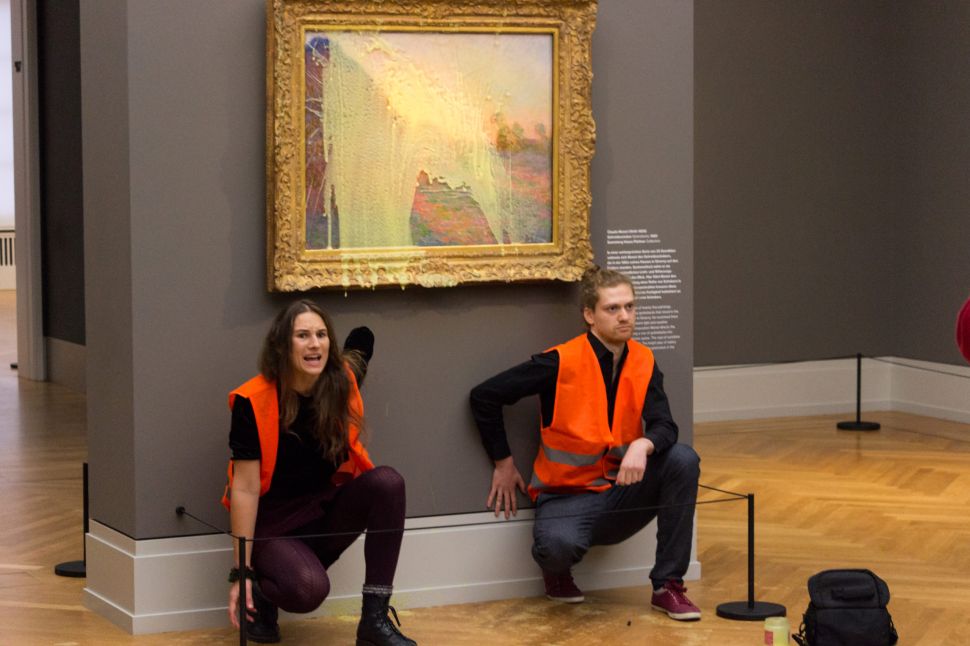