Meticulously directed, gorgeously photographed, and sensitively acted by a superb cast, Michael Grandage’s My Policeman is a heartbreaking, largely underrated British film about three people in an unconventional, life-altering bisexual love affair that spans 40 years, from the 1950s to the 1990s. When I saw it at the Toronto International Film Festival, I found it mature, sophisticated, sexy, and moving enough to reduce me to tears. Since this usually happens as rarely as a tax rebate and almost always involves films about poverty, abandoned children and adorable dogs in jeopardy, I was stunned by my emotional reaction and prepared for the declaration of a masterpiece. Now that it has opened commercially to the disturbingly tepid indifference of largely mixed reviews, I am, in the words of Lorenz Hart, bewitched, bothered and bewildered. To be fair, it has also received some well-deserved raves, but much of what I’ve read is misinformed, misguided, misleading, and mindless. (Also, in some cases, homophobic.) My advice: if you read something negative about My Policeman, ignore it and see this exemplary film for yourself. You’ll be glad you did.

Based on a popular, highly praised novel by Bethan Roberts, the screenplay is by Ron Nyswaner, Oscar-nominated for writing Philadelphia, and the direction is by Michael Grandage, who made an accomplished debut in 2016 with Genius, about legendary literary editor Maxwell Perkins (played by Colin Firth) and his clients F. Scott Fitzgerald, Thomas Wolfe, and Ernest Hemingway. Grandage makes ambitious, high-quality films of uncommon intelligence that are not always embraced by the low-brow hoi polloi, of which My Policeman is a prime example.

It begins as the clock is about to strike the year 2000, when an elderly man named Patrick (Rupert Everett), badly damaged by a stroke, is brought to a seaside home to be nursed back to health by Marion (Gina McKee), one of his oldest friends, and her husband Tom (Linus Roache). She seems devoted, Tom remains resentful of the intrusion and refuses to have anything to do with his uninvited guest, and that’s all we know. But as memories come flooding back, fueled by evenings at the opera listening to Verdi, the film slowly, intriguingly begins piecing together stray  pieces of the puzzle that provide clues to their identity and their relationships to each other.

Suddenly it’s London, 1958, Marion (Emma Corrin) is a bright, promising schoolteacher and Tom is an earnest but uneducated young cop (played by pop star Harry Styles). They meet on the beach and fall in love, but before long they encounter Patrick (David Dawson), an artist and museum curator who reminds Tom of the finer things in life he’s been missing. Patrick teaches Tom about art, music, scotch and  sex, recruiting him to pose for a painting that leads to seduction, and a new way of life that both frightens and intrigues the naive Tom. Life is exploding all around him, opening new windows and plunging him into an erotic abyss of forbidden passion.

The narrative is non-linear, so the characters are juxtaposed, the fragments of their story blending from 1957 to 1999 while we share their journey through the changing prisms of time. Marion loves Tom. Patrick loves Tom. Tom loves them both. But he wants a wife and children, too. So Tom and Marion marry in 1958, but his love affair with Patrick grows more intense. Marion indulges them both while Patrick takes Tom on an Italian sojourn to explore Venice. The threesome spans years while they all endure the agony of living a lie, but the film is so delicately observed that the viewer never grows restless. At a time when homosexuality in England remained illegal, Patrick is arrested, damned in court by the excerpts in his diary about Tom, convicted and jailed for “public indecency,” like Oscar Wilde. It is Marion who comes to his defense. But Mr. Grandage isn’t finished with his story yet. As six actors warmly portray three characters four decades apart, the facts emerge at last, and it is the person you least expect to solve the riddle of what really happened to change them irrevocably that renders the gently dramatic ending with so much overwhelming wisdom and anguish. Tom, Patrick and Marion evade easy closure while moving toward a place of renewal as they realize they must come to terms with the past if they are to move on with their lives.

Harry Styles may be the commercial lure, but although he infuses the narrative with a certain glamor, he is only one cog in a perfect wheel. His nude sex scenes with David Dawson are graphic but genuine, involving both physical attraction and spiritual depth of feeling. It’s a rare experience when any film passes these passions on to the viewer with such sensitivity. This is why I was so moved by the way the characters are portrayed—both in the throes of youth and when the trio is decades older. Nothing in this picture is sensationalized for its own sake. Everything depicted is necessary to tell the story correctly—and everything is photographed with insight and splendor by Ben Davis, who also shot The Banshees of Inisherin. The film becomes increasingly more compelling as it reaches its undeniably emotional conclusion. Both the intimacy and the expansive pain and bravery of bigger emotions in My Policeman leave you with a sense of galvanizing hope. 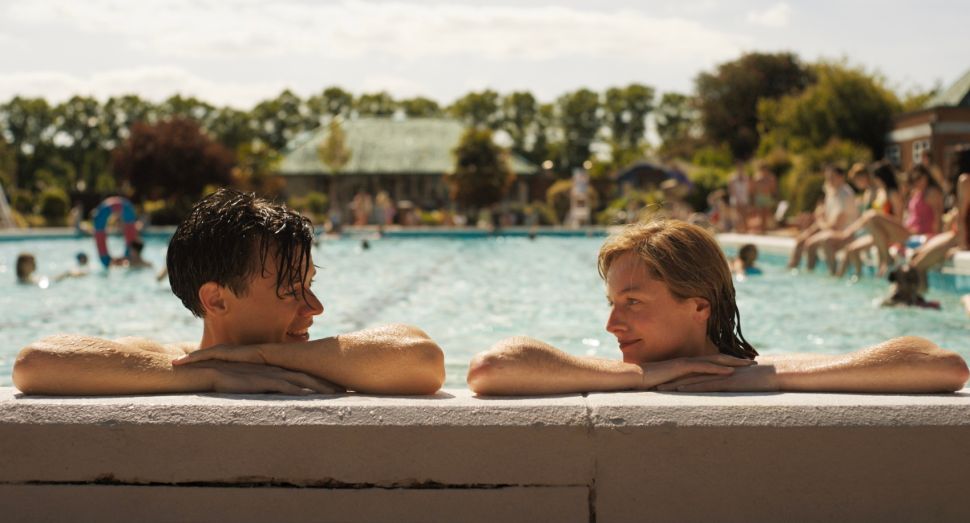