Michael Mayer’s 2018 fairy-tale production of La Traviata starts as a ghost story. The actors are posed in what we eventually realize will be the final tableaux. Violetta lies dead, but as the overture sighs around her, she rises up, a dead woman walking, leaves her bed empty, and disappears with a little smile upstage, before the party scene bursts forth and the story begins.

Is this her spirit escaping, gone to be always free at last?  Or is it the beginning of a cycle that never ends, of beautiful girls and the forces—physical and patriarchal—that makes them live and die for us infinitely? Like much of this production, this moment has more style than sense, but there’s a kernel of something striking underneath the silly indoor fake snow. Violetta dies again and again, every opening night; she’s dying from the second she opens her mouth. But her arias! Her arias feel like life-force distilled; a strength that remains untouched as her body declines. So, every Violetta, marked by death like we all are, is to be a ghost, but she also has to be fully alive.

Violetta’s strength lies in how she insists on her dignity in the face of Giorgio Germont’s hypocritical bourgeois morality. Good Violettas are witty and charming, of course, but there’s a serious core— a strength and sense of self-possession that define the Verdi heroines of this middle period. They are essentially noble and generous people underneath their lightness; the tragedy is that these qualities don’t save them from the worlds they live in.

Nadine Sierra, in her role debut, captured sides of Violetta and more. Vocally, this was a nearly unassailable performance, but Sierra brought out something that felt true and thoroughly human in Violetta; we hear her sob and laugh and gasp for breath.  In the first act, Sierra was irrepressibly lively and enchanting. She moved with a lightness that made for a beautiful contrast with her creamy, almost impossibly rich sound, which she commanded with strength and a palpable sense of enjoyment. “Sempre libera” showed a singer thoroughly in control of the aria’s shifting emotions as Violetta gives in, resists, and gives in again at last, and the cabaletta’s vocal fireworks sparkled with life after a spellbinding cantabile. By the third act, it was clear how tremendous Sierra was in this role; her vocal and dramatic stamina are truly admirable—many a Violetta runs out of steam by the end. Any minor vocal glitches (of which there were very few in the whole night), were washed away in welcome tears for this reviewer during Sierra’s affecting and sensitive “Addio, del passato.”

As much as La Traviata needs its heroine to envelop us with pathos, to me, the opera often lives and dies on Giorgio Germont. Without real dramatic presence, the extraordinary two-person rhetoric scenes can become interminable, but with a smart singer in the role, it becomes something akin to a slow-motion car crash. Verdi, consistently interested in patriarchy and patriarchs, writes the best villains, because they always believe that they’re good. Luca Salsi is quite capable at playing these operatic bastards, with his brash and forceful sound; his Germont is a nasty bully, but also a sly one, quickly picking up on exactly the argument he needs to make to get Violetta out of his son’s life. In Salsi’s hands, this Germont is more straightforwardly hypocritical, more calculating, and as unsympathetic as possible.

Finally, there’s Alfredo, silly and immature. Stephen Costello felt a little off in this role and this production. The tenor’s voice was a little crispy around the edges in the first act, sounding distinctly baritone-y which gave the impression of a somewhat older Alfredo than the brash young lover audiences expect. To his credit, however, he only improved throughout the night, the voice slowly burnishing with increased shine and color as we sped towards “Parigi, o cara.” Costello’s upright and reserved physical presence was often at odds with the flightiness of Mayer’s blocking for the character, which sees Alfredo often cowering, crumpling, and flinging himself about like a very young man. Had there been any adjustment in his blocking to capture the tenor’s natural movement, Costello could have shone a little brighter.

Underpinning all of this was Daniele Callegari vivid and thoughtful, which injected life and a sense of suspense to this classic. Callegari directed his singers beautifully and pulled out every drop of Verdi’s delicious melodrama. While this production, never my favorite, has already begun to feel tired underneath its garish colors, last night it felt revivified, a new Violetta rising to love and die all over again.

Mayer’s production has always looked a little more like Disney’s La Traviata to me—the golden vines that wind about the stage and garish colors frame the story as we are jumping into a fairy tale. If it’s a fairy tale, however, it’s also a ghost story.. 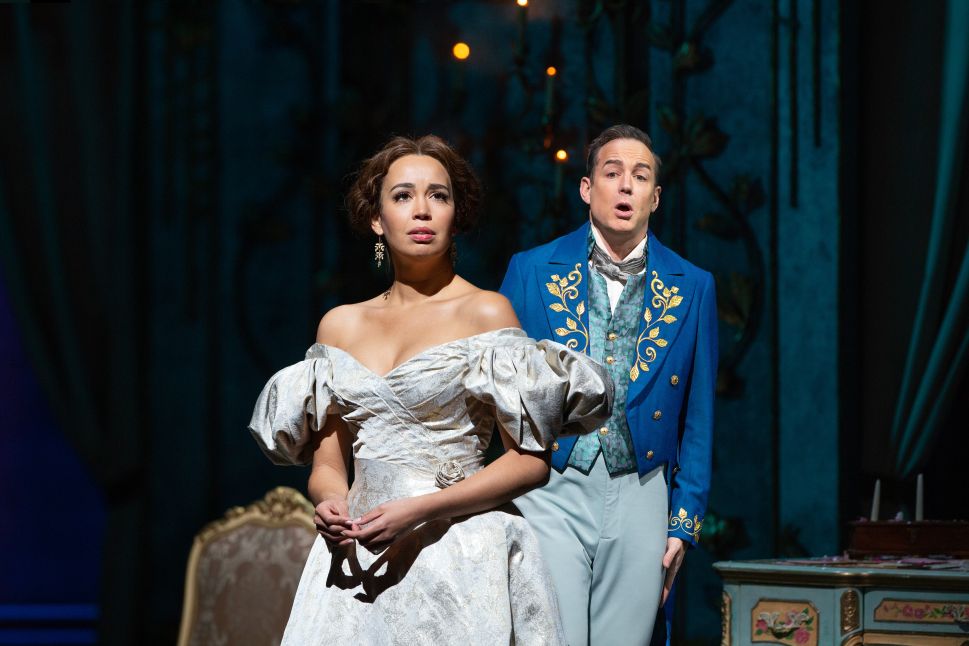