Britten’s bleak opera can be challenging as it focuses on a brutal, possibly homicidal fisherman ostracized by his corrupt village. The contentious clash between Grimes and the gossiping, unsympathetic neighbors leads inexorably to his off-stage suicide during the work’s closing moments. The remarkable team of Allan Clayton and Nicholas Carter, tenor and conductor of last spring’s problematic Hamlet, galvanized a powerful return of Grimes to the Met for the first time since John Doyle’s much-derided production premiered in 2008.

Riding high after successful Broadway revivals of Sweeney Todd and Company, Doyle misfired with his only Met project to date. Its most controversial feature remains Scott Pask’s enormous oppressively monolithic set dotted with doors and windows. Periodically, characters pop out at those openings calling to mind either an Advent calendar or Rowan and Martin’s Laugh-In, the 1960s television comedy show. The heavy wall may suggest the oppressive milieu in which Grimes struggles, but it does little to evoke the eighteenth-century English fishing village seen in Ann Hould-Ward’s period costumes. Revived by J. Knighten Smit, Doyle’s stark staging often pushes the dark set so far forward (quite noisily on Sunday afternoon) that much of the action is crammed onto the front edge of the stage.

Perhaps inspired by its openly gay composer, some recent productions of Grimes have suggested that the doomed fisherman’s antisocial behavior might result from suppressed homosexuality, but Doyle clearly has no interest in that interpretation. Clayton doesn’t soften Grimes’s violent behavior toward his young apprentice and Ellen Orford, his sympathetic would-be girlfriend. Yet the tenor’s hauntingly beautiful singing goes far in encouraging some sympathy for Grimes as the townspeople repeatedly gang up on him.

It’s been argued that the true protagonists of the opera are the villagers, and Donald Palumbo’s mighty black-clad Met chorus ferociously rose to the task with its powerfully frightening condemnations of Grimes. Doyle’s production never attempts to individualize the chorus members; they remain a malevolent single-minded mob. However, several cast members stood out for their pungent characterizations.

Patrick Carfizzi, recently the Met’s go-to lovable Tosca Sacristan, excelled as Swallow whose interrogation and exoneration of Grimes opens the opera. Chad Shelton’s ringing Bob Boles suggested that the tenor might make a fine Grimes himself. And while Justin Austin perhaps radiated too much good will as laudanum-supplier Ned Keene, his suave baritone made its mark.

However, Adam Plachetka’s continued prominence at the Met, particularly in leading Mozart roles, remains baffling. As Balstrode, he postured mechanically, and his gravely bass-baritone grew increasingly grating as the afternoon progressed. Little of Balstrode’s sympathy for Grimes emerged, and his devastating suggestion that Grimes kill himself proved downright malevolent.

Michaela Martens’s Mrs. Sedley often lapsed into dithering caricature though she acidly put across her “Murder most foul” scene. Denyce Graves once might have made an effective Auntie, but for some time her mezzo has been in a parlous state which seriously compromised the ravishing women’s quartet.

Nicole Car offered an unusually forthright Ellen, ripe with persuasive goodness. Her poignant brief unaccompanied duet with Clayton suggested a rare moment of sympathy between them: a glimpse of what might have been. Her horrified interrogation of the traumatized apprentice revealed a touching singing-actress, and Car’s exquisite “Embroidery” aria offered a lovely and much-appreciated oasis amidst Grimes’s spiraling self-destruction.

Unlike the explosive Canadian dramatic tenor Jon Vickers whose Grimes dominated world stages for nearly two decades, Clayton harkens back to the less extroverted English tradition of Peter Pears, creator of the title role and Britten’s life partner. Like Pears, Clayton has performed a good deal of baroque music and lieder and brought a delicately nuanced approach to Grimes’s more wistful and inward moments. He however summoned the necessary ringing power for the poor man’s rages; his uncontrollable, wild-eyed mania made one understand the townspeople’s fears.

Carter, who had been so impressive in illuminating the intricate complexities of Dean’s Hamlet, again drew magnificent playing from the Met orchestra, especially in the four glorious Sea Interludes. Also thrilling was the tautly crisp touch he brought to the ear-scorching ensembles in which the villagers rage against Grimes.

After weeks of only eighteenth and twentieth century operas, the Met next week finally turns with a vengeance to Verdi launching four operas—La Traviata, Don Carlo, Rigoletto and Aïda—over the next six weeks. 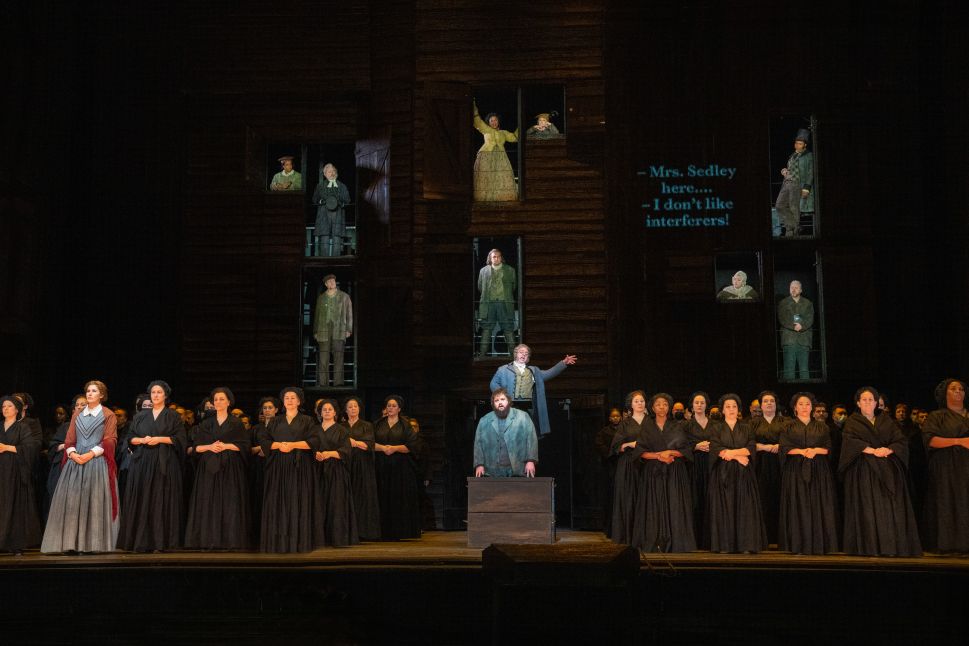