Unfairly maligned Beanie Feldstein is gone. Noisy enough to be heard in the Times Square subway, indifferent in the acting department, but serving the score by Jule Styne and Bob Merrill admirably, Lea Michele has stepped into the sequin shoes of the late, great Fanny Brice. Business is booming.  And with the first New York revival of Funny Girl at the August Wilson Theatre on Broadway, it’s business as usual.

I liked Ms. Feldstein and I like Ms. Michele for different reasons.  Neither come close to diminishing anyone’s memory of Barbra Streisand, but both ladies have brought qualities of their own personal magnetism to the historic role of the legendary star of the Ziegfeld Follies and their fans brought their own special appreciation and adoration along to guarantee success. I think it’s safe to say Funny Girl is here to stay.

To those mean-spirited curmudgeons who objected that Ms. Feldstein did not look the part, I say “Have you seen Ms. Michele?” She doesn’t remotely look or sound like the Fabulous Fanny. The ladies in Brooklyn who open the show sing “If a girl isn’t pretty, like a Miss Atlantic City,” but when she appears, svelte and curvaceous, what you see is a fashion model. When she sings, her voice is more silver than brass, but when she speaks, it’s a mile a minute and for at least 50% of the show they come out pure gobbledygook. She lacks a badly needed sense of comic timing and there isn’t much heart on display, either. To her credit, she’s no cheap imitation of La Streisand. Her voice is not sweet enough on “People,” warm enough on “The Music That Makes Me Dance,” or anything close enough to enchanting on “Who Are You Now?”  But it’s loud enough to shatter glass on “Don’t Rain On My Parade.” Oddly enough, my favorite musical interlude was the duet between Ms. Michele and the handsome, gifted Ramin Karimloo as the first Nicky Arnstein who can really sing, act, and dance. (Eat your heart out, Omar Sharif.) I still don’t understand why they added extra songs from the movie version, but I’m grateful for the wonderful “Funny Girl,” which the penultimately dazzling Mr. Karimloo sings with a poignant quality where it’s most needed between bombasts. Also added: Tovah Feldshuh as Fanny’s mother Rose. Admittedly, she’s an improvement over the misguided, misused Jane Lynch, but talk about ham acting! I’ve loved her in other roles, but as Mrs. Brice, she chews enough scenery to cause concern over asbestos poisoning.

Although Ms. Michele’s fans seem to crave  her more than I do, the passion that ends every song with thunderous ovations (many of them standing) is admittedly contagious. From Henry Street to her audition for Flo Ziegfeld and her arrogant, rules-breaking pregnant bride bit in the Follies and the dissolution of her marriage to glamorous gambler Nicky Arnstein and his eventual arrest for embezzlement, the show (with a newly refurbished update by Harvey Fierstein) moves along with breathless speed, and most of the production numbers remain unchanged. (The one they should have cut is the dreadful “Rat Tat Tat,” the worst thing in the show.)  Michael Mayer’s direction and David Zinn’s gaudy sets still recreate the humor and heartbeat of Broadway in the Roaring Twenties, replete with crowd-pleasing confetti.

Filled with the kind of youngsters we need to keep the theater alive, the theater where Funny Girl is playing reaches capacity every night. Without an empty seat in the house, this is a cause for rejoicing, but where all those eager young people find the money to buy tickets (orchestra seats are going for $1,200 a pop) is a mystery to me. I don’t blame Ms. Michele for screaming her way through every number.  At those prices, I’d scream too.  It must be said that the audience screams right along with her. 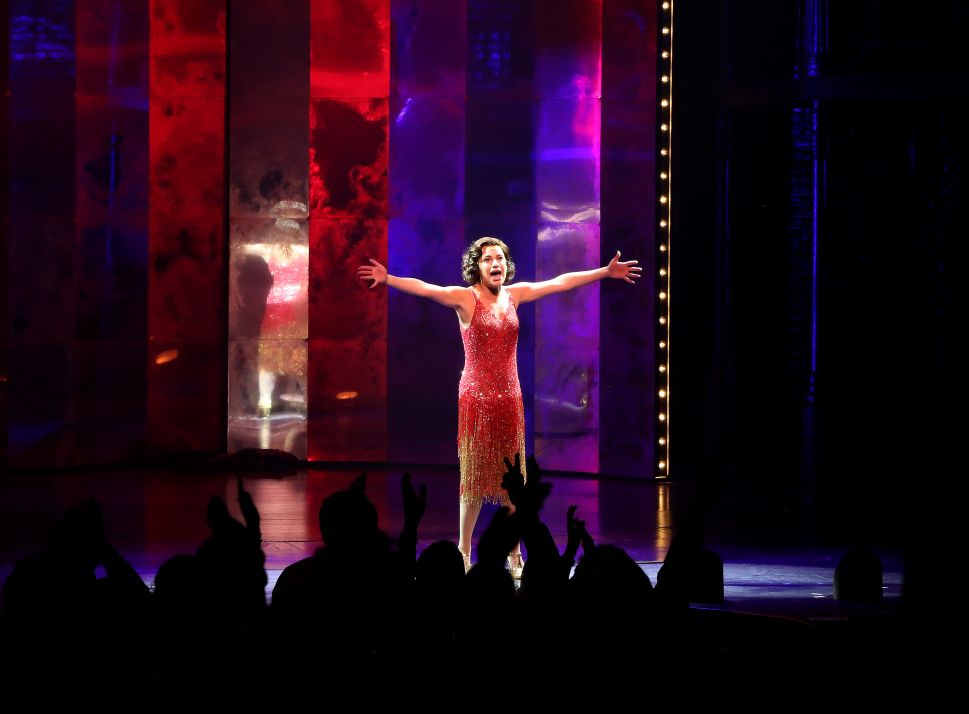