In July, Sono Motors, a German upstart carmaker publicly traded on Nasdaq, unveiled Sion, a mass-market electric car powered in part by solar energy, at its headquarter in Munich. Sion is the world’s first passenger vehicle heavily relying on solar power and at roughy $25,000 comes at a price lower than most electric vehicles. This month, Sono brought the car to the U.S. for a seven-city tour to offer potential American buyers a first glimpse ahead of its expected delivery next year.

With a solar car, Sion is attempting to do what engineers once thought impossible given the limits of how much electricity a car-sized solar panel can generate. Sono is testing a hybrid approach: using solar to power only a third of a car’s driving range and a battery pack to provide the rest. But will it find a market in the U.S., where consumers have more choices of EVs made by established carmakers than anywhere else?

At first glance, Sion comes across as a basic, nondescript five-door hatchback—free of any flashy logos, trims or color options—like Ford’s Model T, it only comes in black. Upon closer inspection, however, the majority of the car’s muted exterior is covered in dark blue solar panels. A total of 456 “solar half-cells” cover the car’s hood, fenders, roof and all side doors.

The interior of Sion boasts a similar subdued, practical design—a basic black steering wheel, all-black polyester seats, and a simple digital display standard in today’s electric cars. The only unusual feature is a bar of plexiglass-covered moss embedded in the center of the front dashboard. “A touch of nature for pleasant indoor ambience,” said Laurin Hahn, cofounder and CEO of Sono Motors, when showcasing the vehicle at an event in New York City earlier this month. Sion’s backseats have enough leg and head room for someone as tall as Laurin, who is six-foot-three, and the trunk provides storage enough to meet the need of a typical family outing.

One of the least expensive EVs in the U.S.

By its appearance and battery specs alone, Sion doesn’t stand out from other EVs in the U.S. market. But its solar power is a unique feature and comes at a price unmatched by most battery-only competitors.

In the U.S., EV sales has been rapidly growing and outpacing gas cars in recent years. Between April and June, nearly 200,000 purely electric cars were sold at an average price of more than $66,000, according to Kelley Blue Book. I In the three-month period, EV sales accounted for 5.6 percent of total car sales, more than doubling the share a year earlier.

Sion is priced at around 25,000 euros in Europe. Thanks to a strong dollar this year, that converts to about $25,000 for Americans, making it one of the least expensive EVs in the market. The cheapest EV in the U.S. is the Nissan LEAF, which starts at $20,875 after applying the $7,500 federal tax credit under President Joe Biden’s Inflation Reduction Act. Sion, which will be manufactured in Finland, won’t be eligible for same tax rebates when it starts delivery next year. Hahn said Sono is actively looking for manufacturing partners in the U.S., hoping to qualify for tax rebates in the future.

Throughout Sono’s U.S. press tour, company representatives would routinely ask visitors to guess the price of Sion. The most common guesses range from $40,000 to $65,000, a company spokesperson said.

Sion’s driving range, when including solar power, is comparable to popular models such as Tesla Model 3 and Mustang Mach-E, but is more than 30 percent cheaper than either car. Model 3 starts at $38,690 after multiple price hikes this year, and Ford Mustang Mach-E starts at $44,000.

Like many carmakers, Sono did have to raise the price of Sion too by a few hundred euros to account for increased production costs this year, said CEO Hahn.

Sono said it has received more than 20,000 reservations for Sion globally and 22,000 pre-orders from fleet operators, including more than 12,000 from FINN, a car subscription service operating in Germany and the U.S.

The unpredictability of solar power

Sono has a few competitors in the solar EV niche, such as Netherlands-based Lightyear and the U.S.-based Aptera Motors, but it’s the only company targeting the mass market. Auto analysts are skeptical about some of its claims.

“Whether they can provide an extra 70 miles a week is debatable,” Sam Abuelsamid, an analyst leading electric vehicle research at Guidehouse Insights, a Michigan-based consulting firm, told Autoweek last week. “The fundamental problem is that the panels will only be at their peak generating capacity when the sun’s rays are hitting them at a 90-degree angle of incidence. And cars, by their nature, are moving, which means the panels aren’t usually at an optimal angle.”

If Sono’s passenger car business fails to take off, a more promising product might be its commercial solar offering. Sono sells solar panels that can be installed on transit buses, delivery trucks and any electric commercial vehicles that have suitable surface space. The company says its solar solution is being tested by more than 20 companies Munich’s municipal bus fleet and a branch of Mitsubishi Europe. 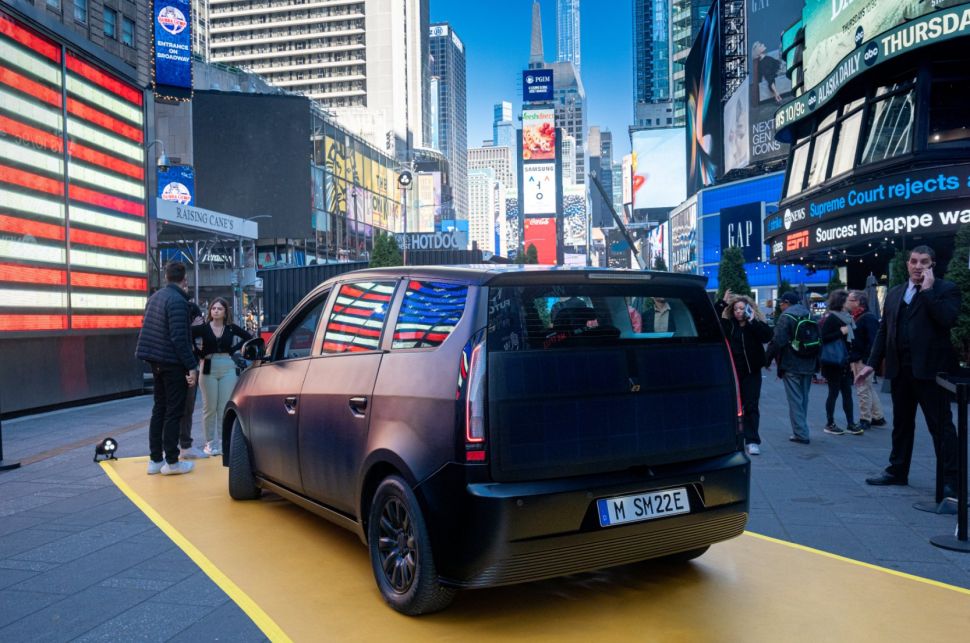