The New York Film Festival started 60 years ago with an Angel—Luis Bunuel’s surrealist classic The Exterminating Angel, about an elaborate Mexican dinner party in which guests, trapped and unable to leave, revert to animalistic behavior and eventually die. And death was in the air again on September 30th as the festival began two weeks of Lincoln Center screenings with a black comedy about death and the apocalypse, White Noise.

“I was hoping for more jokes, but it’s pretty sincere,” he began. “I’m super-excited to be here because I grew up in Brooklyn, and my parents would take me every fall to this festival to see movies. Filmmakers showed me how they make the movies when I was younger, and then I started to go on my own. I saw movies that would blow my mind and introduce me to filmmakers that I didn’t know. Then, I’d anticipate their next movies and come to see the filmmakers I loved.

“It was a big part of my film education. In 1995, the 33rd film festival, my first film—Kicking and Screaming—premiered here and was rescued from going straight to video by its distributor and gave them confidence to give it a life and a couple of theaters to see what happens. I owe this festival the beginning of my career, so I’m very grateful to it and very pleased to be here. I never had a movie open a festival, and it’s a childhood dream come true.”

White Noise, with its CGI effects and action scenes, is a far piece from standard Baumbach fare. He seemed surprised he’d made it at all. That he had, he chalked up to timing. His dad gave him the book when he was a teenager, and he started it then. The pandemic gave him a chance to finish it.

“Having completed Marriage Story, it was the first time in my career that I didn’t have a thing that I necessarily felt was alive enough that I knew I wanted to do,” he said. “On finishing the book, I thought, ‘The confusion, the fear, in this book—this represents how I feel right now.’ It would have been true with or without the pandemic, but that certainly put a finer point on it. I sorta set out to do it as an exercise, something to occupy my mind. Then I started showing pages to Greta, and she was encouraging. When I got even deeper into adapting the book, I felt, ‘Well, let’s try this.’”

Being Mrs. Baumbach, Greta Gerwig was in on the ground floor of all this creative percolating. “I also read the book when I was 19,” she recalled. “I thought it was hilarious, and I dog-eared every page.” When Baumbach finally asked who should play the female lead, she didn’t hold back: “Me!”

Then came the arduous business of casting a proper (in this case, improper) husband for her, Jack Gladney being a professor in a small, midwestern town whose rep rests on pioneering the field of Hitler Studies. Husband and wife share a mutual fear of dying—which is a remote possibility until they come into contact with “The Airborne Toxic Event,” a chemical spill from a rail car that releases a black noxious cloud over the Gladney home. Jack must confront his mortality when he is exposed for two minutes to the toxin as he and the family join the area’s mad mass evacuation.

Baumbach didn’t search long for a husband. He picked the one that he last used in Marriage Story, Adam Driver. “I sent Adam the book and said, ‘See if this even feels like something you would want to do,’” the director said. “He got very excited about it, so, while I worked on the script, I could envision Greta and Adam doing the lead roles.” After giving Driver a pot belly and a nerdy haircut, he was good to go.

Casting the four kids the Gladneys accumulated in their three marriages was less of a cinch. “I knew the kids were going to be such a big part of the movie,” Baumbach admitted, “but that was just auditioning. It was daunting, but I got lucky. Two of the children were siblings—May and Sam Nivola—which was a happy accident to happen. Then Raffey auditioned from England. I’d seen her  a few times. You just have them read and read. It was the pandemic, so it was all over Zoom. If you can’t find the kids, you know you can’t make the movie—but you don’t want to admit that.”

To achieve the chatter clutter that the family went through in their kitchen scenes, choreographer David Newman was brought in. “He really made it all feel like a dance,” Sam Nivola recalled. “I think that this worked perfectly because every little spin was carefully thought out.”

Baumbach had some further refinement for the youngsters: “My suggestion to them was they are like a radio that was turned on at the beginning of the movie and they just talked the whole movie. Whether we see them or not, they’re just still talking, and then, when it’s over, you turn it off.”

When the question came up if one’s own fear of death influenced a performance, the first to raise his hand was a non-actor, composer Danny Elfman. “The first thing Noah said to me when we first met on the phone, ‘This movie is made for you, Danny. It’s all about death and the fear of death,’,” Elfman said. “And he was right.”

Baumbach broke the film down for Elfman this way: “In broad terms, the first section was the system and strategies we’ve created for ourselves to keep death at bay or to keep this illusion of immortality going. The second section is ‘Here comes death to our door, and it’s real, but we don’t know how to acknowledge its reality because we only know it from movies and from a distance.’ And the third section is ‘Okay, now you’ve seen it. What are you going to do now? Do you go back to the same strategies? Can these things hold up with this new knowledge?’”

Of all unexpected things, White Noise concludes with an elaborate musical number staged in a brightly colored A&P supermarket. “From my side,” Elfman said, “it was really exciting because there’s no genre in this film. To have a film that has no genre to tell you the type of music you should write is pure joy.” Part of the fun, for Elman, was jumping right into the project at Baumbach’s request. “He said, ‘Can you start on some music right away?’ and I said, ‘Well, I don’t know. I’m in the middle of this Doctor Strange movie, but okay.’ I just wrote some stuff blind, and the next thing I know he’s cutting my music into his movie, in ways that I hadn’t even thought of. And we just got more and more into trying things. I’ve worked on, I think, 110 films now, and this definitely is one of the most enjoyable.” 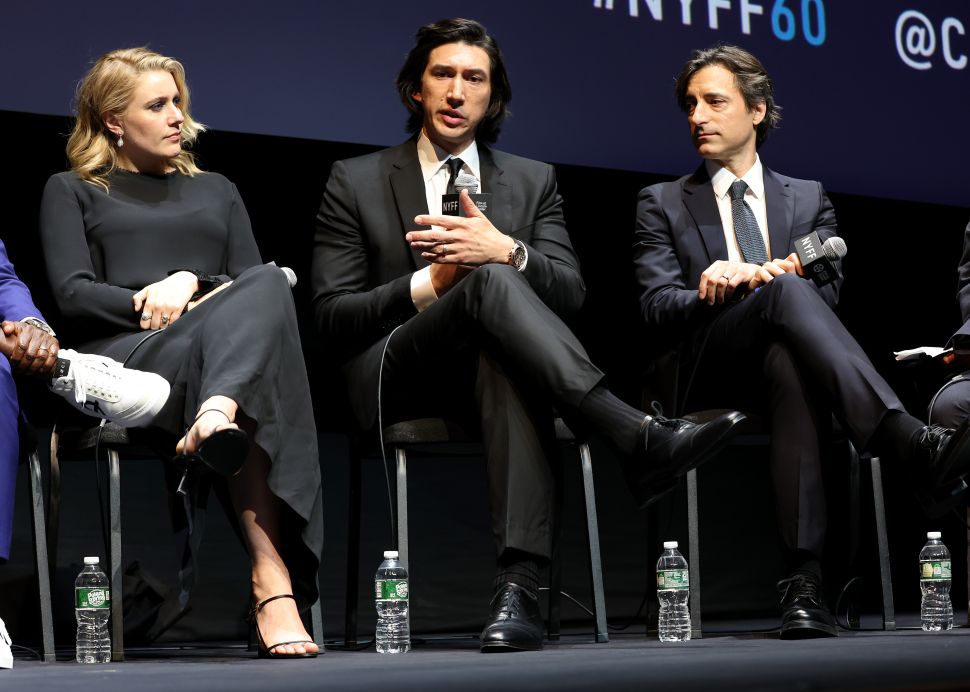