Passerby entering Grand Central Terminal’s lofty and chandeliered Vanderbilt Hall throughout the next month will be met with an exhibit dedicated to the Regional Plan Association (RPA), one of the most influential yet simultaneously unknown forces in New York’s history.

The Constant Future: A Century of the Regional Plan celebrates the centennial of the RPA, a non-profit civic planning group that has helped shape metropolitan life over the past 100 years. Founded in 1922 by a group of business and civil leaders, the RPA has produced four Regional Plans throughout the past century, each addressing unique challenges of transportation, housing, public health, governance, and social equity. “If you know, you know,” is how James Sanders, the architect who produced the exhibit, describes the RPA. “The RPA and Regional Plans are this incredibly important part of the story of New York, but they’re not as well-known by the public.”

The exhibit includes large-scale photographs and archival sketches of New York over the years, accompanied by panels breaking down the initiatives, successes and failures of the RPA’s four plans, which were released throughout 1921 to 2017. From the association’s 1960s goal to redevelop Jamaica, Queens, to dreams of connecting the Long Island Rail Road to Grand Central in the 1990s—which will finally become a reality by the end of this year—to its 2017 incorporation of climate change as an important and concerning aspect of New York life, the exhibition details the RPA’s involvement in just about every aspect of planning in New York. Panels are also dedicated to other RPA projects from years past, such as photographs from studies the association conducted in the 1970s to examine subway and pedestrian crowding.

The more than 750,000 people who pass through Grand Central every day will have the opportunity to stop by the free exhibit, which opened Oct. 7 and runs to Oct. 24.  The location’s grandeur was in part chosen to reflect the lofty plans of New York, said Sanders. “Everybody knows where it is, everybody can get to it,” he said. “And Grand Central connects the suburbs and Westchester and Connecticut to New York. It couldn’t be a more perfect example of the value of regional thinking and planning.”

One of the most striking aspects of The Constant Future: A Century of the Regional Plan is how the RPA’s influence on the planning of New York often materialized through the actions of others. Mayor Fiorello La Guardia is noted as having used the RPA’s first Regional Plan as a guide, while urban planner and public official Robert Moses brought a number of the association’s plans to life, including the creation of the Robert F. Kennedy Bridge and development of the Jacob Riis and Orchard beaches. “[Robert Moses] hated to admit this, and he improved on the plan as he carried it out, but we used to say that he had a copy of the Regional Plan tacked up on the back of his attic door or somewhere, and he’d take a look at it and say, “Well, I think I’ll do that next year,”” reads a quote in the exhibit from former RPA President C. Mckim Norton.

The RPA even initiated what eventually became the High Line park, according to RPA president Tom Wright, who said the association in the 1990s recommended an elevated park be erected when discussing what to do with the derelict railroads on Manhattan’s west side. “We’re one of those groups often in the background, promoting ideas, doing research, working with public officials,” said Wright. “Our role is provocateur.”

The fact that the RPA is a private civic group, while it gives no weight of law to its recommendations, allows the association to maintain an independent and credible reputation of operating without political or business interests, he said.

When viewers reach the end of the RPA’s exhibit, they will pass a QR code allowing them the option to send in their own recommendations of New York’s future to the RPA. Through this exhibition, the association, which is today focused on issues like housing supply, congestion pricing and gateway pricing, is attempting to enlist more supporters and participants, said Wright. “The more people engage, the more informed they are, and frankly, the more influence we have.” 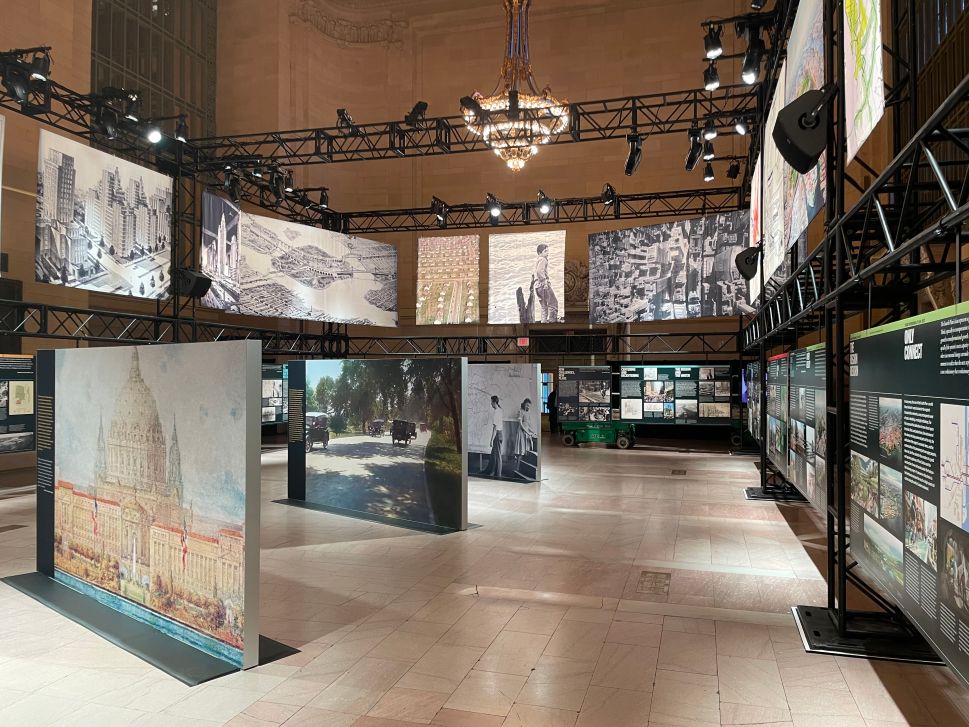