Halloween is upon us, which means streaming platforms everywhere are releasing some of their big-ticket titles to terrify and titillate viewers. Whether your idea of spooky fun is stop-motion animation, true crime, or the sinister secret lives of the upper class, this week certainly has something to suit your tastes.

Jessica Chastain and Eddie Redmayne headline this tense true crime story. The Good Nurse is “a thriller built on compassion” that centers on overworked single mother Amy (Chastain) whose night shifts in the ICU are brutal, save for her quiet and caring coworker, Charlie Cullen (Redmayne). However, things take a turn for the truly chilling as authorities begin to question her on a string of mysterious deaths that have occurred in the hospital. All signs point to Charlie as Amy does some digging of her own, finding out that his silent reign of terror has left a staggering body count across several different hospitals. The Good Nurse premiered earlier this week.

If The Nightmare Before Christmas and Coraline are some of your Halloween favorites, then you’re in luck. Stop-motion animation director Henry Selick makes his return to filmmaking with Wendell & Wild, a new horror comedy that also happens to be co-written by Jordan Peele. Peele and frequent partner Keegan-Michael Key provide the voices for the titular demons, who try to scheme their way into the Land of the Living. Though it may not be as intense as some of Peele’s recent work, the movie is a perfectly crafted concoction. Wendell & Wild premieres Friday, October 28th.

From French auteur Claire Denis comes Stars at Noon, an erotic thriller of sorts that relies on Denis’ keen sense of quiet unease. The film takes place in modern-day (i.e., COVID-era) Nicaragua on the cusp of a tense election, and it stars Margaret Qualley as Trish, a disillusioned and frequently drunk reporter who’s resorted to sex work to keep herself afloat. Things change, though, when she meets the enigmatic Daniel (Joe Alwyn) — and not just because they can’t stop having sex with each other. The complex romance gradually shifts into a tense thriller, leaving the audience on their toes just as much as the main characters. Stars at Noon streams Friday, October 28th.

Crimes of the Future

For those who may seek a funkier sort of horror movie this week, David Cronenberg has you covered. The king of body horror returned to his craft earlier this year with Crimes of the Future, a twisted tale of human evolution in the not-too-distant future. Viggo Mortensen stars as Saul, a man with “accelerated evolution syndrome” that sees him develop new organs in an ongoing and painful process. He turns the removal of these vestiges into performance art with the help of his partner, played by Léa Seydoux. Surgical sequences, social commentary, and a mousy-voiced Kristen Stewart round out this thoroughly weird film. Crimes of the Future starts streaming Monday, October 31st.

This new limited series toes the line between murder mystery and supernatural horror in spine-tingling ways. The Devil’s Hour tells the story of Lucy, a woman whose terrifying visions wake her up at the same time every night. When she inexplicably gets involved in a string of local murders, some of her questions about this strange haunting begin to get answered — whether she wants them to or not. What’s more, the killer (Peter Capaldi) takes a special interest in her. There’s more than meets the eye with every character, making for a series rife with tension and unease. The Devil’s Hour premieres Friday, October 28th.

Just over a year after we touched down in Maui to stay at The White Lotus, it’s now time to set our sights on Sicily for a steamy Season 2. The second installment of Mike White’s anthology series takes place at another White Lotus resort, and though the name and Jennifer Coolidge remain, there’s a whole new cast of characters and social pressures at play. Big names like F. Murray Abraham, Aubrey Plaza, Michael Imperioli, and Theo James join the ensemble, their characters as rich and insufferable as you’d hope they’d be. Season 2 of The White Lotus premieres Sunday, October 30th. 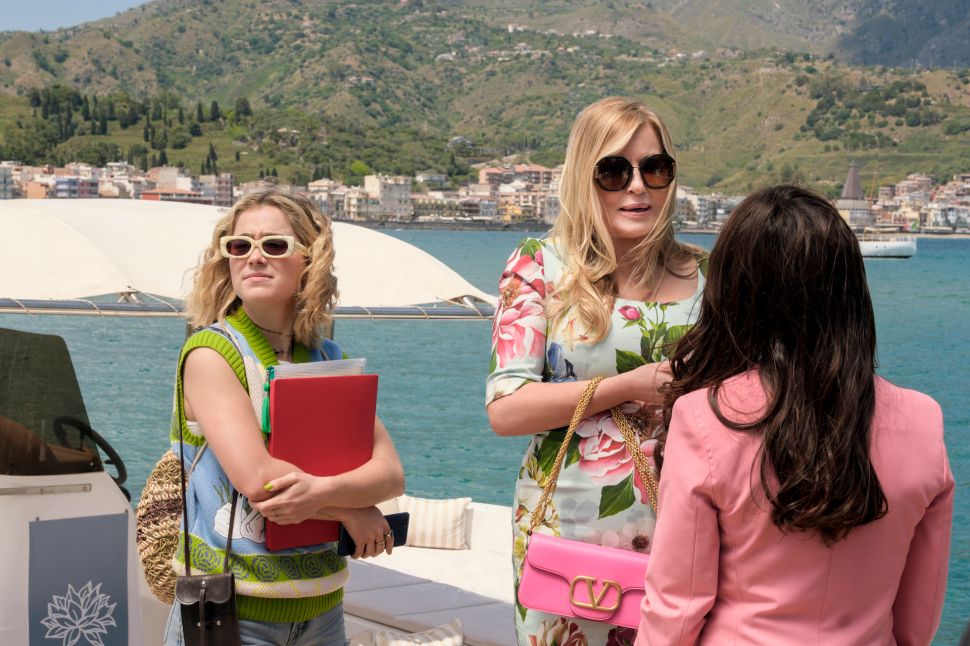