A wave of rare, widespread protests in China over the weekend against the country’s stringent zero-Covid policy shocked the world and prompted several countries and international organizations to urge the Chinese government to change course on its pandemic response, raising slim hopes that this could be the beginning of the end of zero-Covid.

After stocks fell Nov. 28, the first trading day after the tumultuous weekend, both Hang Seng and Shanghai indexes rose sharply today (Nov. 29), up 5 and 2.5 percent, respectively. Investors seemed buoyed by hints of possible changes to Covid measures ahead of a meeting held by the Chinese Center for Disease Control and Prevention.

Also today, the International Monetary Fund (IMF) urged China to “recalibrate” its zero-Covid policy “because of the impact it has on both people and on the economy,” Kristalina Georgieva, the IMF’s managing director, said in an interview with the Associated Press.

In Berlin, during a regular press conference Nov. 28, Steffen Hebestreit, the chief spokesperson for the German government, said Germany has “taken note” of the protests in China as well as “reports about partly violent actions of the [Chinese] security forces against the demonstrators.”

The Biden administration said it’s “closely” watching the situation in China and is “careful” in discussing Beijing’s strict management of the pandemic, John Kirby, the spokesperson for the U.S. National Security Council, told reporters at a press briefing in Washington D.C. today.

Protests boil over major Chinese cities after fire in Urumqi

Thousands of people in at least 10 Chinese cities, including Beijing and Shanghai, took to the streets on Nov. 26, chanting slogans like “End lockdowns!” “We don’t want Covid tests, We want jobs!” according to videos circulating on Chinese social media. Protests also spread to dozens of universities across China, including Beijing’s Tsinghua University, Chinese President Xi Jinping’s alma mater. Peaceful demonstrators held up blank sheets of white paper as a symbol against the Chinese government’s extreme censorship of online speech during the pandemic.

In Shanghai, the first city where protests were reported on Nov. 26, multiple demonstrators were heard shouting, “Xi Jinping Step Down, Communist Party step down,” marking a rare moment in the history of Communist China. Police and government workers clad in white hazmat suits were seen clashing with the crowds and making arrests on site.

The widespread protests is the boldest display of public anger toward the Xi’s zero-Covid policy and his government since the pandemic began in early 2020. It’s also believed to be the largest civil demonstration in mainland China since the Tiananmen Square movement in 1989.

The unrest were triggered by a fire that killed at least 10 people in a residential building complex in Urumqi, a city in northwestern China, on Nov. 23. Urumqi, a city of more than four million, had been under a strict lockdown for more than 100 days. Videos circulating on social media showed fire fighters were unable to get to the site in time because the entrance and driveways of the apartment building complex were blocked by barriers and cars with dead batteries due to three months of sitting idle.

The Chinese government has yet to issue an official response to what happened over the weekend. On Nov. 27, blue barriers were erected on Shanghai’s Urumqi Road, where protestors gathered the night before. Local police reportedly began randomly stopping people on streets and subways and searching their phones in an apparent effort to identify those who participated in protests, according to videos posted on Twitter. 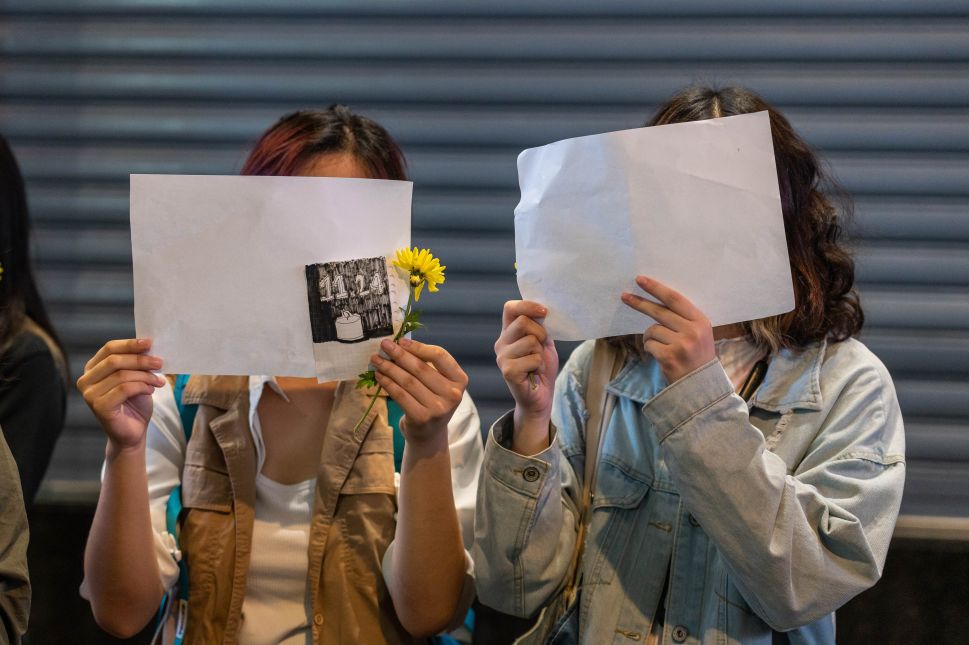