Now at the Irish Rep, extended through Nov. 20, is Chester Bailey, Joseph Dougherty’s searing drama of a Brooklyn Navy Yard welder, who, in 1945, suffers a devastating injury that robs him of his sight and his hands but not his will to live. The play is also, not at all incidentally, a father-and-son two-hander, executed with precision and compassion by Reed Birney and Ephraim Birney.

Because Reed, 68, has been one of New York’s most prodigiously employed and—let’s just say it—best actors in the 45 years since his Broadway debut in Albert Innaurato’s Gemini, it’s logical to assume he named his firstborn after the patriarch in Eugene O’Neill’s Desire Under the Elms.

Guess again. “It’s an old family name,” Reed crows. “Ephraim McDowell was a doctor in Kentucky in the early 1800s, the first doctor to successfully remove an ovary. Fritz Weaver made a television movie about him, with the villagers outside with pitchforks and torches in case the woman died. His daughter, Agatha, married James G. Birney, who ran for President against Polk in 1845.”

These days, Reed confines his crowing to the son he currently shares the stage with: “As you can imagine, it’s a pretty profound experience for both Ephraim and me. Actually, it’s sorta beyond thrilling. I think that we were both very nervous about spending that kind of intense time together, but I also think that we both were struck about how incredibly fast we just became colleagues.

“Every once in a while, I’ll stop and pinch myself and go, ‘Look at you! Good for you!’ People ask, ‘Do you give him notes?’ There’s no reason to give him notes. He’s come up with this incredible performance all on his own. It must resonate in the audience to see us up there as father and son.”

This play—which the Birneys first did at the Contemporary American Theater Festival in Shepherdstown, WV, and then at Barrington Stage Company in Pittsfield, MA, before they landed their New York beachhead at the Irish Rep—has indeed changed their relationship, Reed concedes. “I think we have a much more grown-up, collegial, intimate relationship, having gone through this experience together, but we’re still really goofy with each other before and after the play.”

Ephraim, 26, feels that, too. “On paper,” he admits, “it sounds like the actor’s nightmare: You wake up, and your father is across the stage from you, but it very quickly became apparent to me that working with Dad was going to be such a new gift to my relationship with him. I believe that it helped him see me as a man, not just as his son but as a colleague—somebody he could work off of, someone he could share ideas and art with. For me, working with him felt like not only seeing what a master does on the stage but seeing somebody you’ve always looked up to all these years. Really, it’s an affirmation of why I act, why it makes sense that I would follow in his footsteps.”

In the case of Chester Bailey, Reed followed in Ephraim’s footsteps. The son was cast first in the flashy title role by Ed Herendeen, the founder of the Contemporary American Theater Festival.

The other role in the play—Dr. Philip Cotton, a psychotherapist assigned the job of weaning Chester from his helpful, heeling imagination and back into grim reality—was uncast. Then, Ron Lagomarsino, the director of Driving Miss Daisy and The Last Night of Ballyhoo, entered the picture to helm Chester Bailey and asked Ephraim if his dad would mind taking on that role. (Seems he’d directed Reed—and Joanne Woodward—in a 1982 Kenyon Festival Theater revival of Hay Fever.)

Ephraim relayed the message to his dad, and initially Reed was reluctant to accept the challenge. “But then I thought, ‘Oh, if I turned down this opportunity to do this play with Ephraim, I’ll regret it the rest of my life,’” says the senior Birney. “I’m planning on this being my last play.”

Stephen Karam’s version of his drama, The Humans, which at last brought Reed the almighty Tony in 2016, ended badly for him in January of 2019 when the cast got back from London. He found out on the street his prize-winning role was given to an imagined “box-office name,” Richard Jenkins.

“Something big inside me broke,” Reed admits, “and I thought, ‘I’m never going to set foot on stage again.’” (This doesn’t mean he won’t be acting. He’ll just be doing films and television.)

But, already, an exception to that hard-and-fast rule has surfaced: “There’s a gorgeous, gorgeous play that Donald Margulies has written for Margo Martindale and me called Lunar Eclipse,” Reed says. “I really would come back for that play, and it’s a part that I wouldn’t ever outgrow.”

Ephraim’s growth as an actor is something that sincerely amazes Reed. “One thing that thrills me so much is his accent,” Reed notes. “We were driving to West Virginia, and he said he was nervous about it. I said, ‘Let me hear some lines.’ He did a couple of lines and sounded exactly like John F. Kennedy, and I thought, ‘Oh, boy, we’re in trouble.’ Then, within days, he had a perfect, antique Brooklyn accent, like one of The Bowery Boys. One reviewer said, ‘It’s like he emerged from a time machine.’ I think that’s absolutely true. He’s so authentic, and it seems so effortless.”

Being in love with the character you’re playing definitely helps. “In a lot of ways,” Ephraim confesses, “it’s every actor’s dream part. You’ve got so much to do. You get to experience so many different extremes that it’s a test of how fluid and seamless you can switch between them. The reason I love this role is because who Chester is as a person. His imagination and his belief and his faith are not only endearing, they’re flat-out inspiring. Every time I play him I find parts of myself to embody in him—his creativity and his steadfastness. Chester Bailey is really something to be.”

There’s a reason Reed never tried to reroute Ephraim’s professional aspirations. “I wanted to be an actor since I was a baby,” Reed says, “and people always tried to talk me out of it. If you decide you don’t want to do it, that’s a decision you’ll come to on your own. It’s not my place to say don’t do it.”

Hence, a house of actors: Daughter Gus is in her second season of Shining Vale, playing the off-spring of Courteney Cox and Greg Kinnear. And “Mom” (Constance Shulman) was a regular on Orange Is the New Black and is bound for Manhattan Theater Club in January to do the best we could (a family tragedy), Emily Feldman’s new play which Daniel Aukin will be directing.

“Acting was the zeitgeist of what my family did,” Ephraim says. “Around 10, I knew I wanted to be an actor, too, and started working toward that. Dad never really dissuaded me. He was always very truthful about what that life was like. I knew it’d be hard, but I was having too much fun doing it.” 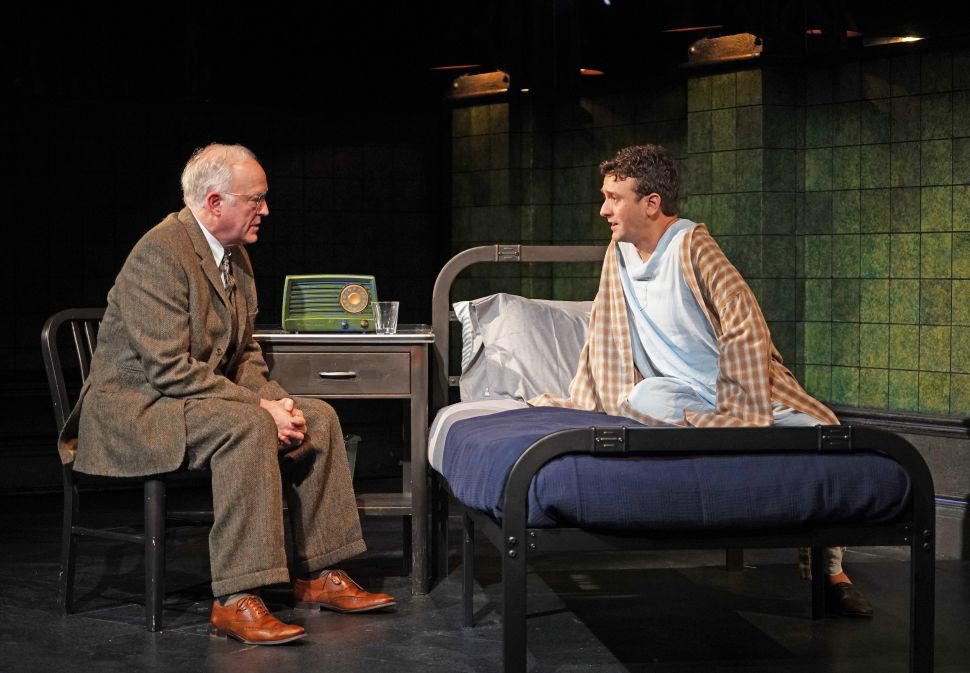