Back in 2005 in Los Angeles, young game makers David Jaffe and Cory Barlog premiered footage from a new game called God of War. After the presentation, they talked about the characters their team had created. Most were loosely based on Greek myths, but one of the characters was blood. The way the blood gushed and moved when you sliced into an enemy, they said, was a story unto itself.

While God of War has become one of PlayStation’s most bankable action-oriented games, the iterations have changed over the years to focus more on narrative. The last edition, in 2018, shifted to Norse myths and featured a duo—Kratos, the muscular protagonist, and his young son Atreus—ensconced in a sad, touching story of battles, puzzles, and family loss. So much loss, in fact, that there seems to be a kind of PTSD visible on the faces nearly every character in God of War Ragnarök. Kratos is world-weary and perhaps rightfully overprotective of the now-teen Atreus, who just wants to live his best life during wartime while solving a mystery in order to prevent apocalyptic disaster.

God of War Ragnarök is bloody, but it’s not about blood. It’s about plot points and surprise as you traverse the Nine Realms of Norse mythology. The plot itself was leaked online due to a retailer selling the game early. That probably won’t hurt sales much because folks who pay $70 for a PS5 game also want to avoid spoilers. But what may hurt sales is that Ragnarök is the second in a father-and-son series. It’s better if you know about the happenings in the 2018 game. If you haven’t played, a video will update the past proceedings before your start, or you can buy it new for $20. But that takes time, and you’ll want to play the new edition immediately.

Ragnarök begins with seconds of secret sounds in darkness. Is it a snowstorm swirling? Embers crackling? The chipping away at soft rock? We see the burly Kratos in a cold cave, dutifully making arrows over a fire, carving the tips into fine points. He looks worried and a feeling of trepidation settles over you as you play. You’re soon on a sled powered by wolves as Kratos drives Atreus to their camp. On the icy trail, you engage in a brief fight with a persistent, colorful enemy. It’s exhilarating and tense, a mere hint of what’s come. Loss feels imminent. But press the proper controller buttons repeatedly at the right time and you’ll win easily—at least, this time.

On their modest home turf, there’s one of the most touching, heart-rending moments to be found in video games this year. A verbal altercation between Kratos and Atreus follows. Atreus believes Kratos is hiding, not only from enemies, but from life itself. Atreus doesn’t seem to want a grand life of parties or fancy meals and mead. He just wants the truth—and that’s not nearby.

The feeling of guilt and loss is thankfully tempered by Mimir, a severed head that spouts wisdom and wit. Kratos attaches Mimir to his belt when he goes on missions. Thus Kratos and Mimir can have a walk and talk before the action, especially when danger is near, perspective is needed, or puzzles have to be solved. Mimir’s smart-alecky retorts add some welcome humor, but the overall mood is foreboding.

The narrative brings up questions about the difference between feeling protected versus overprotected? Can freedom be a danger in itself? I found myself pressing “pause” now and then to stop and think. The environmental PS5 graphics are — as expected — dazzlingly realistic. They do their job well, especially in the freezing storms. But really, much of the story is about faces, the subtleties of humanity and what we have to endure during nasty, brutal lives that are sometimes too long and sometimes too short.

When Thor, the god of thunder, makes his entrance into Kratos’ abode he’s no Marvel pretty boy. Thor is overweight, almost paunchy. And he’s tired, too. When Odin appears, it’s the same. Both have the look in their eyes of soldiers and leaders who’ve seen too much and can’t shake it, no matter how puff-chested they are in public. It’s like their self-importance could break down into madness at any moment.

The way these scenes are shot in close-ups recall “The Godfather” or “The Revenant.” Even if you don’t want to feel their anguish, it’s right in your face. There’s often nothing pretty here, just pain or the recollection of pain. But because of their proximity to the camera, it’s noticeable when an actor misses, as Sunny Suljic, who plays young Atreus, sometime does.

It’s then that the action becomes a savior. God of War has always had big battles. You battle beings many times your size, and get tossed high into the sky, even into space, the way gods are apt to do. When you’re thrown into a hill or mountain, it shakes as if an earthquake had hit it.

At less than 10 hours in, I was happy to have the choice of leaving the main story to search some lush islands. Even without power ups, I jumped over wide chasms with a grapple, and it almost seems as if I’ve taken flight. As I vanquished enemies, I began to upgrade Kratos’ and Atreus’ skills, which make the gods of war, well, godlier. Even your shield can become stronger.

I still worry about those who haven’t played the 2018 game. Even though there’s furious fighting, magic and puzzles to distract and engage, there’s nuance from the past story they’ll miss, especially if they don’t pay attention to the walk and talk through eye-popping environs. But those who played and have waited four years for the follow up will be quite satisfied with Ragnarök, its curious or gigantic monsters and its over the top gods who are constantly saddled with human-like problems. 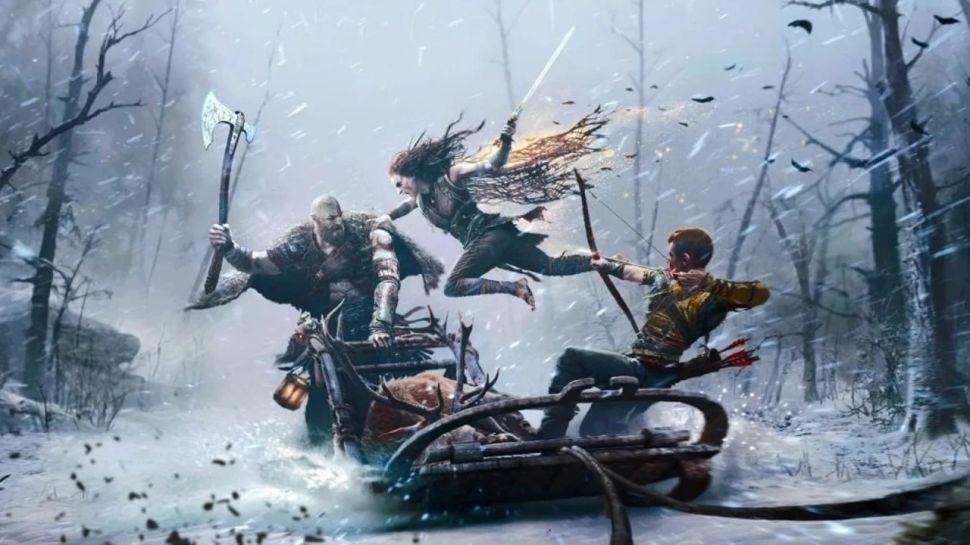