You walk into the theater, more discombobulated than usual and worry about missing the chance for late seating. As you collect your ticket from the box office, you readjust your mask so it doesn’t fog up your glasses, turn off your phone and headphones, and ask for directions to the bathroom before deciding to postpone your visit until after the performance, which is due to start in 30 seconds. You hurry down a flight of escalators, which deposits you in a lobby where the walls are a blur of green flyers. It’s only later, after the curtain call, after you’re disgorged back into the lobby, after you’ve had a chance to scrutinize those same flyers, with tear-off phone numbers (which, on closer inspection, are fake numbers), that you realize they were referenced in the play. You walk out into the icebox evening, tangled in an inchoate mass of feelings. On the subway, you look through your barely legible notes (an occupational hazard of scribbling in the dark) and see a hodgepodge of nouns (terminal illness, Wizard of Oz, conspiracy of ravens, murder of crows) and comparisons to other plays that feel wholly incommensurate to describing what you’ve just experienced: a work that reaches for what seems like a wholly new category—a submersive theater performance that tunnels beneath the skin, uproots preconceived ideas (of illness, of insurance, of the afterlife), and rewilds the imagination.

Part of what makes Noah Diaz’s “You Will Get Sick,” making its world premiere at Roundabout Theatre Company, so skin-crawlingly, deviously effective is that unassuming“you” in the title. Large chunks of the play are voiced by a disembodied narrator (Dario Ladani Sanchez), who addresses us repeatedly in the second person, as if from an Italo Calvino novel, if Calvino had written a novel about people turning to hay and menaced by crows. The effect is uncanny in the extreme, like being locked in an anechoic chamber and hearing sounds—blood pumping, teeth grinding, cilia semaphoring—which ordinarily barely register to you—the strange source of it all—and which now form a column of foreign sounds in the amplified silence. Even though the “you” in this play isn’t being used to actively conscript you as the protagonist, you, meaning me, meaning we, have been netted in what Lionel Trilling called the “hum and buzz of implication.” As a narrative device, it’s a loaded die: who wouldn’t want to find out what precisely ails you? Why do you need to hire an elderly lady (played by the great Linda Lavin) to tell your sister that you’re sick? Why does an aggressive salesman (Nate Miller) keep pitching the idea of “bird insurance”?

“You” in this case is an unnamed character played by the highly versatile Daniel K. Isaac. (None of the characters is given names in Diaz’s playscript, which identifies them solely as Actors 1, 2, 3, 4, and 5.) We first see Isaac’s character, Actor 1, speaking on the phone to Lavin’s character, Actor 2, who is calling in response to an ad that Actor 1 has put up seeking someone to lend him an ear. The play’s script identifies the location as a “big city” somewhere in the Midwest and the action unfolds in “a time before cell phones.” Over corded phones, Actors 1 and 2 argue about the price of the fee stipulated on the flyers before Actor 1 tells a quizzical Actor 2 “something I’m not ready to tell anyone I know.” Actor 1, who is asthmatic and afflicted with a mysterious illness that causes him to shed hay, continues to enlist the services of Actor 2, an aspiring actor, in breaking the news of his medical mishap to others, including his sister (Marinda Anderson). Ever the shrewd negotiator, Actor 2 dragoons Actor 1 into partnering with her in her evening acting classes. The black-tiled set, by the design collective dots, is the visual equivalent of a sensory deprivation chamber and morphs seamlessly from a shower stall in Actor 1’s apartment to a corner nook in a café. Skylar Fox’s gravity-defying illusions are wondrous to behold—on par with magician  Asi Wind’s feats of prestidigitation a few subway rides away.

Under Sam Pinkleton’s superb direction, the narrator, who remains unseen until the very end, works deftly in a few different modes as if he were a switchboard operator or an Emersonian eyeball observing all. Through a God mic, he sometimes verbalizes what might loosely be described as Actor 1’s interior monologue, suggesting the dissociation that might overwhelm an individual dealing with a terminal illness. Other times, the narrator recites lines that sound like stage directions that, however, don’t always correspond to various actions unfolding onstage. Finally, he appears as an embodied character that it would spoil the play to reveal.

“The most truthful way of regarding illness—and the healthiest way of being ill—is one most purified of, most resistant to, metaphoric thinking,” wrote Susan Sontag. Diaz’s play both affirms and playfully dissents from this view. Is terminal illness like one of the huge prehistoric birds in the play that snatch people up without warning? Or is it more truthful to plainly say, as Actor 2 does of Actor 1, that “he’s been falling a lot lately, his balance isn’t right, his body is failing him”? Yet, a question nags: does Actor 2 actually say this of Actor 1, or 1 reveal himself thus to 2? “Maybe that’s exactly how it happens or maybe it isn’t,” goes a typical gloss by the omniscient narrator. In this way, the play is a bit like one of those lenticular posters whose image changes due to the slightest tilt of the head. The play’s flatly declarative title leads you to expect one thing going in—maybe an urgent work of social realism, à la “Cost of Living”—only to scramble all your original points of reference. After seeing the play, I felt ineffably changed, down to the cellular level. For a play about illness, it is, in its sub rosa way, deeply life-affirming. Go see it. You will be surprised. 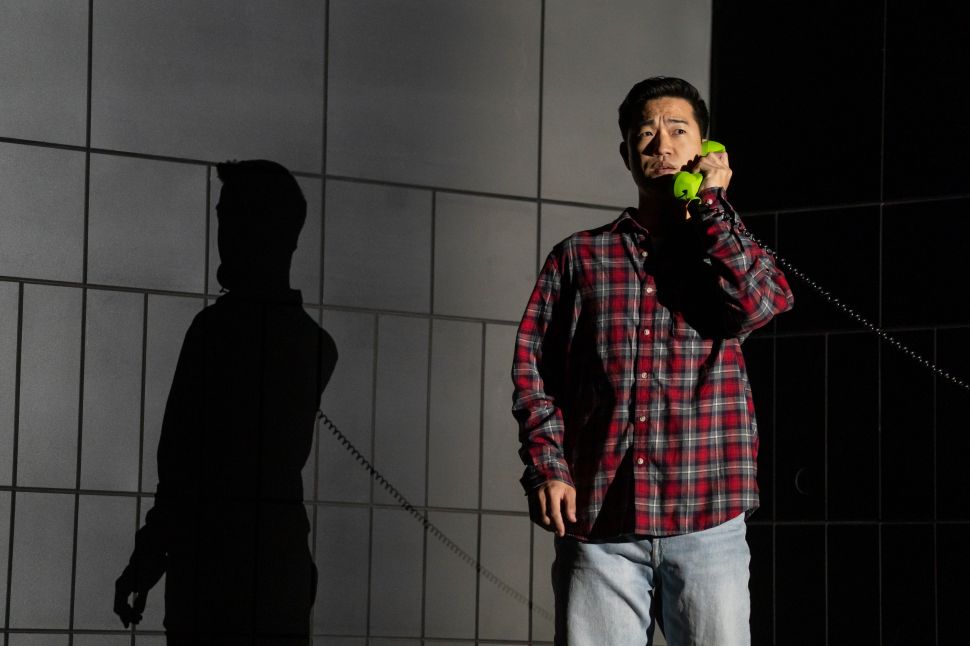