Journalism, as an everyday practice, is not particularly exciting. There are lots of fruitless phone calls, rapid Googling and (the bane of all existence) endless transcribing. Researching and writing even the most riveting article doesn’t tend to be an action-packed adventure. But onscreen the journalistic profession is often given a glossy sheen, transformed into a much more compelling version of itself. That’s the case with She Said, director Maria Schrader’s adaptation of the non-fiction book of the same name by New York Times journalists Megan Twohey and Jodi Kantor.

The film, like the book, follows Megan (Carey Mulligan) and Jodi (Zoe Kazan) as they uncover producer Harvey Weinstein’s decades of sexual abuse and misconduct against women in Hollywood. It adheres to a similar construct as Spotlight or Inventing Anna, where the journalists not only have to find the story but also convince their sources to go on the record. Patricia Clarkson and Andre Braugher play the pair’s intrepid editors, while Ashley Judd appears as herself, a high-profile whistleblower against Weinstein. The narrative moves at a rapid pace—the timeline is clearly condensed—as Megan and Jodi seek out more and more sources who can corroborate the abuse. These include two women, played movingly by Jennifer Ehle and Samantha Morton, who bolster the story enough for the Times to publish.

She Said is not a ground-breaking tale. What makes it interesting is the depiction of Megan and Jodi as working moms who are forced to struggle within a system that prioritizes male needs. Watching the acclaimed journalists take cell phone calls with sources from their bedrooms or with their children on their laps will feel relatable for many viewers. What mom hasn’t handed their kid the Netflix password when a work situation presented itself? In Schrader’s hands, Megan and Jodi are heroic, although exhausted, working parents who still manage to bring down one of the most powerful men in Hollywood. It’s a great lens through which to understand this story.

Lingering over the entire film is the #MeToo movement, which has become somewhat stagnant since the pandemic. The New York Times expose appeared in 2017, with more than 80 women eventually accusing Weinstein of misconduct. A massive ripple effect followed in both Hollywood and other industries, making it clear a reckoning was required. At the time, it was thrilling to watch men in power be brought down by their own misbehavior. What has been termed “cancel culture” was actually consequence culture. And it’s thrilling to watch Weinstein be brought down again in the film, even if he’s only a shadow figure in the background of the Times’ work. But it does leave the viewer wondering: What’s next? Was #MeToo a transitory trend that now serves as screenplay fodder?

Although Twohey and Kantor were dealing with extremely high stakes when they wrote and published their Times story, the day-to-day experience of that work likely wasn’t always exciting. In fact, it was probably frustrating and dull at times. As it’s told on the screen, the pacing is quick and the scenes are fraught with tension. There’s a sense of excitement to the unfurling of the story that never feels dull. The film isn’t the best journalism movie ever made, but it’s solid, engaging and remains unpredictable despite knowing how it will end. It’s also proof that if you break a big story someday Carey Mulligan will play you in a movie. 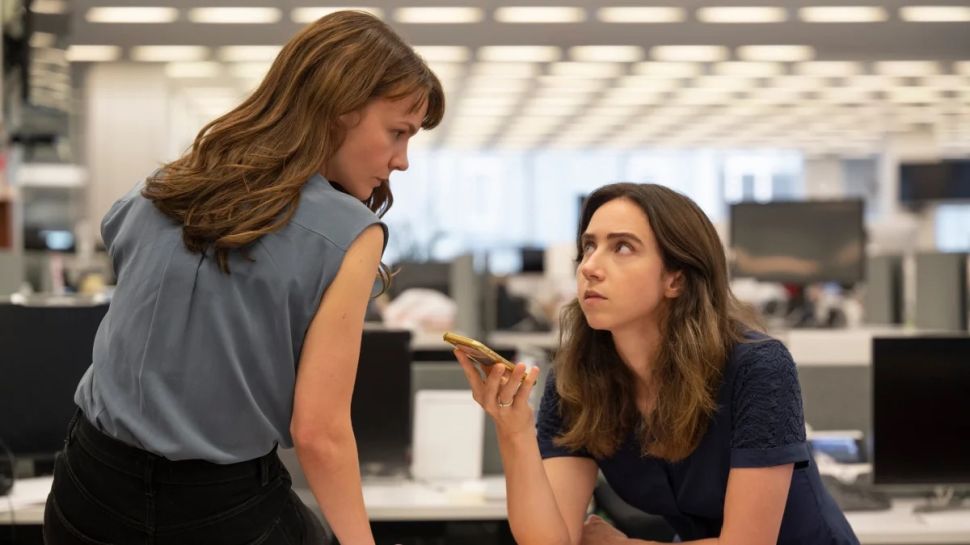