Every performance of 1776 at the American Airlines Theater begins much, much earlier than 1776. Embedded in the Roundabout Theater Company’s usual pre-taped welcome to its patrons is something extra: a greeting from Brooke Simpson, an actress of the Haliwa-Saponi Tribe who plays Roger Sherman, the representative from Connecticut at the Continental Congress and signer of the Declaration of Independence.

“Before the show begins,” Simpson tells the audience, “we want to acknowledge the indigenous people and communities who inhabited this land, long before the events dramatized in this musical.” She informs the theater goers that they are sitting on “the traditional and ancestral land of the Lenape, the original inhabitants of what is now known as New York City. We pay respect to the Lenape people, past and present, and honor the land itself which remains sacred.”

Cued by the way Hamilton asked questions about American history by casting people of color as our nation’s forefathers, this reimagined 1776 tackles gender in its casting, with 21 female, transgender and non-binary performers from diverse racial and ethnic backgrounds. All hit the stage in contemporary garb, which they exchange for the period waistcoats and black buckled shoes worn at the Second Continental Congress depicted in Peter Stone and Sherman Edwards’ heart-swelling, Tony-winning musical of 1969.

Calling the shots here is Diane Paulus, who cast Patina Miller in Ben Vereen’s Tony-winning role of The Leading Player in her 2013 Pippin revival and directed her to a Tony as well. But Paulus swears this new vision of 1776 wasn’t her idea. “The origin story goes a bit like this,” she tells Observer. “I was sent the script by Networks, the company that will tour 1776 once we leave Broadway in February. We start in Philadelphia.” Paulus had never seen the show — or the 1972 movie version — and really only knew about it because 1776 won the Tony in 1969, beating out Hair. “I had done a revival of that on Broadway so I was curious about 1776. When I read it, I read it with the knowledge that the estate was willing to embrace non-traditional casting. I was thinking about that, and I was knocked out of my chair with how relevant the words were, how powerful this subject matter was. Immediately, I felt that this should be revived.”

Paulus’ original plan was to do the show at the American Repertory Theater up at Harvard, but the pandemic skewed all that, and the production went on hold—for two years. “Miraculously,” she beams, “everyone in our cast stayed with the show. It’s really a testament to their commitment.”

During the long interim, Paulus acquired a co-director—her first, ever: Jeffrey L. Page, whom she originally hired as a choreographer. Now, he’s a hyphenate. “I had met Jeffrey through a mutual colleague of ours, Anne Bogart, who’s kind of a mentor to both of us, so I invited him to be a part of the production,” Paulus says. “By the time we picked up the show in 2022, Jeffrey and I had deepened our relationship. Over the pandemic, we had taught the power and relevance of the American musical together at Harvard, using 1776 as a case study. Jeffrey is an amazing director as well as a choreographer. It just felt like the organic reflection of how we were collaborating.”

Page admits he was a little stunned by the invite. “I can never imagine a director saying to a collaborating choreographer, ‘I’d like you to share this with me.’ That’s a tribute to Diane’s way of working, where it’s almost an absence of ego. I just wonder if the other shoe will drop?”

Right now, he’s happy how the division of labor has worked out between them. “Looking at this story—the founding of our nation through the lens of feminism—is stunning, a testament to what Diane brings to this piece. What I bring to it is my perspective as a Black man. I was raised very much inside of hip-hop and R&B. It’s an Africanist mindset, looking at the founding of America.”

In giving a new spin to the show’s 13 songs, Paulus says they worked with the late composer’s son, Keith Edwards. “He showed us the original root of his father’s score and played some of his demos. Our orchestrator, John Clancy, did a brilliant job of finding the folk-pop-rock music in that score.

“It’s been a powerful collaboration,” she insists. “Both Jeffrey and I were really dedicated to having our audience in 2022 embrace a cast of actors who represent America today in multiple versions of race, gender and ethnicity. Every single person on that stage is someone who would not have been allowed to be inside Independence Hall in 1776. So the invitation to the audience is to really embrace two realities: this is not an historical reenactment like a museum piece but an enactment of history from the past that will only serve to deepen our understanding of America today.”

Of all the Tony-winning Best Musicals, 1776 has the longest, songless stretch of uninterrupted dialogue (40 minutes). Neither Stone nor Edwards were nominated for this brave feat. Nor was John Daniels’ star performance of the “obnoxious and disliked” John Adams, trying to talk fellow delegates into splitting with England. Because he was not billed above the title of the show but lumped together with the rest of the cast under the title, he got a Best Featured Actor nomination, which he promptly refused. “Who was I supporting?” he wondered. (Tony was younger then.)

During the show’s 1,217 Broadway performances, the candidate for the most “obnoxious and disliked” actor was reportedly Howard da Silva, who was otherwise a superb Ben Franklin. Da Silva’s deportment was so draining for Peter H. Hunt that the director declined to consider him for the 1972 movie version, relenting only when the actor begged to do the part as his last legacy. It was.

What didn’t make the movie was the song, “Cool, Cool Considerate Men,” removed at the request of President Richard Nixon, who felt (despite the separation of two centuries) that audiences would take a song about wealthy politicians who lean “never to the left … forever to the right” as criticism of his administration. Nixon supporter Jack L. Warner—making his first (and last) film after stepping down from his namesake studio, Warner Bros.—was only too happy to oblige. He was less successful in destroying the whole scene. It surfaced in the restored-director DVD cut.

“I love that part of 1776’s history,” trills Paulus, “that this musical was so threatening to the President of the United States. I guess that that’s the power of the theater for you.” 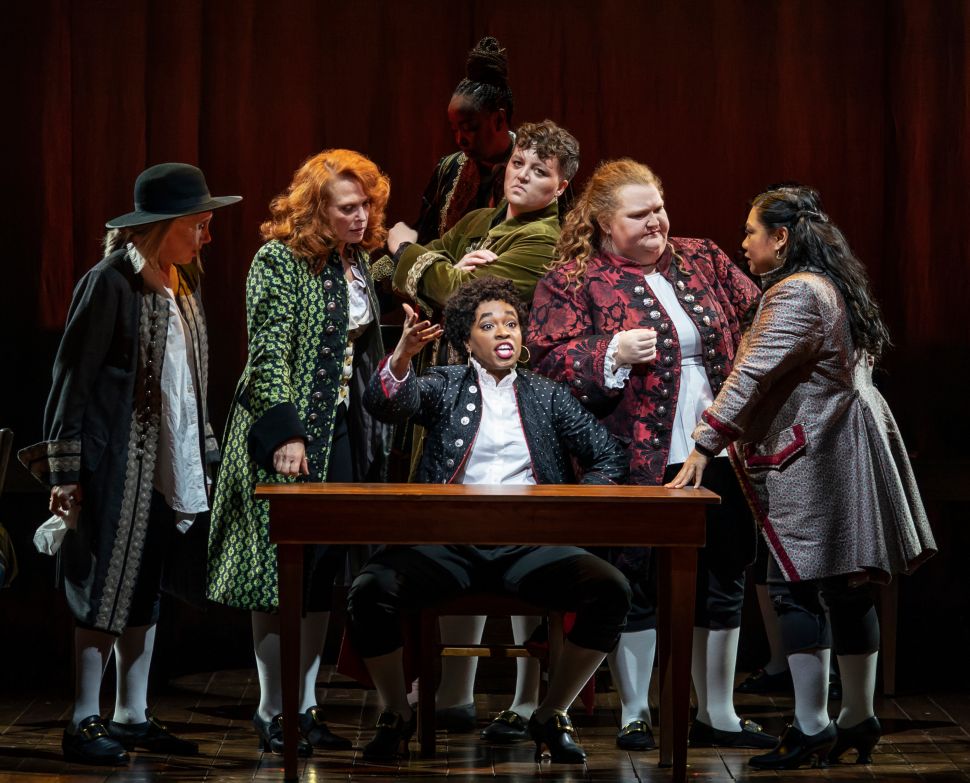