In the 58 films of Steven Spielberg, there has almost always been something youthful and adventurous that appeals to kids of all ages, some element of movie magic that defines his reputation as the richest, most popular and successful motion picture director of his generation. Whether they’re about lost extra-terrestrial children, Peter Pan’s Captain Hook, sharks behaving badly, Indiana Jones exploring new continents, or the prehistoric monsters of Jurassic Park, the reasons for his world acclaim have been hard to analyze. But now, at 75, he’s done the job for us. In The Fabelmans, his most personal film to date, he reveals the sources of the consuming interests that have made him the filmmaker he is today, in an epic that is purely autobiographical. Of course I don’t care who you are. If you want to make an ego-massaging movie about yourself that runs for two-and-a-half hours, you better have a damned good story to tell. In my opinion, Mr. Spielberg’s life story is always slickly directed, professionally written (a collaborative effort by the director and prize-winning playwright Tony Kushner) and admirably acted by an appealing cast, but only intermittently interesting and less than what I’d call mesmerizing. As life stories turned into screen bios go, this one is not always worth the effort.

The domestic saga begins in New Jersey, where Spielberg in fact saw his first movie, Cecil B. DeMille’s The Greatest Show on Earth, and became so irrevocably traumatized by the train-wreck scene that when his parents bought him his own electric train for Christmas, he made it crash. The die was cast. Re-naming his family the Fabelmans, he calls himself Sammy. Sammy gets his sense of adventure from the movies and also from his mother Mitzi (a fabulous Michelle Williams), who skillfully played classical piano, dangerously chased tornados and apparently never stopped smiling, but not from his father Burt, a nerdy computer engineer played by the nerdy actor Paul Dano (perfect casting, if you ask me). The Fabelmans live with Burt’s best friend Benny (Seth Rogen), who becomes a bogus “uncle” to Sammy and his two sisters and something of a wedge in his parents’ marriage. At an early age, Sammy and his family move to Arizona, where Dad accepts a job with General Electric. Sammy, equipped with his first 8-millimeter camera, discovers John Wayne westerns and enlists the Boy Scouts to appear in a cowboy flick replete with guns and stagecoaches, and eventually a serious war film that furnishes a clue to will someday lead to Saving Private Ryan.

We see Sammy learn to shoot film, edit, and develop technique. In the process, he also captures truths with his camera unseen by the naked eye, like Mitzi’s growing attraction to “Uncle” Benny which leads to the Fabelmans’ painful divorce. One wishes for a more unconventional storyline, but the facts assemble in ways that did not prevent me from glancing at my watch. In 1961, the Fabelmans land in Northern California where Sammy encounters his first antisemitic hostility and Mom gives up cooking and buys a monkey. He graduates from high school in 1964, slides into his first affair with a Christian girl, the parents call it quits, and, once again, Sammy finds escape only when he takes out his camera and gets creative.

It seems interminable, but ends at last when he meets his first Hollywood idol, director John Ford, played with crude irascibility by oddball director David Lynch. The only thing Mr. Spielberg seems determined to impress upon his weary audience is that along the way, career-influenced by typical genres, he also learned about empathy and the value of human relationships that, in my opinion, have rarely appeared in his film work. (Exceptions:  Schindler’s List, The Color Purple, Catch Me if You Can.) Pervasive throughout is the standout performance by Gabriel LaBrelle as the teenage Sammy Fabelman/Steven Spielberg, and it is exhilarating and memorable to study Michelle Williams’ dazzling work as his sad, cheerful, encouraging mother. Wearing a blonde Buster Brown hairdo, she looks eerily like Mr. Spielberg’s real-life mother. Whether she’s dancing naked in a see-through dress in automobile headlights or braving it through an unhappy marriage that challenges her free spirit, she is always fascinating, even when the film is not. Though he may one day become one of the greatest directors in film history, her son is less a centerpiece than she, and you can learn more about him from any of his films that from any one scene in The Fabelmans. 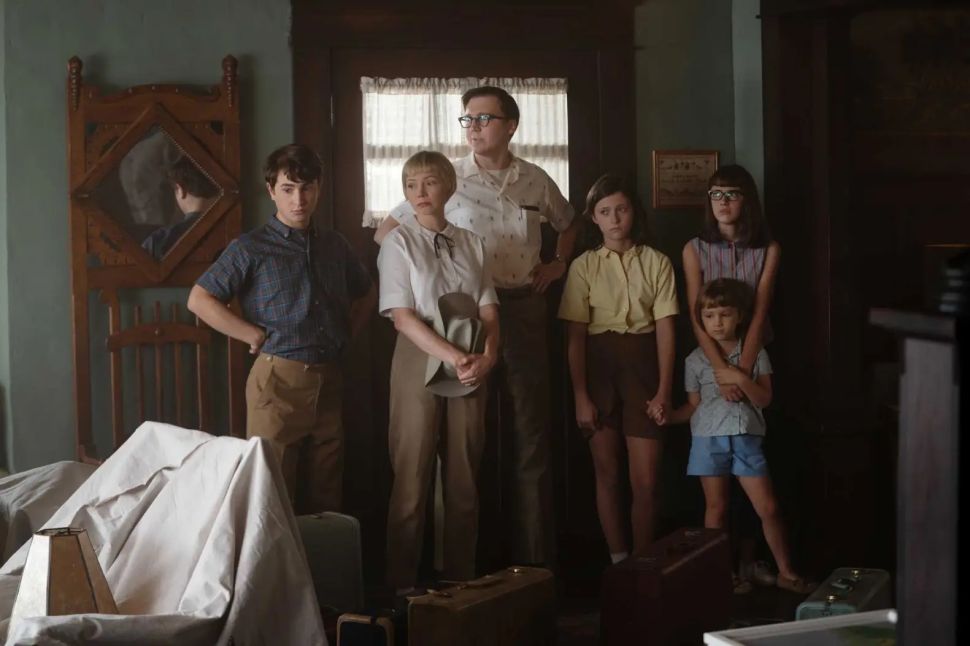