Set the dial on your time machine to about fifteen months ago. PayPal’s stock was trading at over $300 a share, with many analysts predicting it would soar even higher. The company was projecting that in just a few years it would double its annual revenues to $50 billion. PayPal’s subsidiary Venmo was growing by great leaps and bounds. PayPal CEO Dan Schulman was holding forth as an economic thought leader in prestigious settings like the World Economic Forum meeting in Davos.

This week, following a tough trading day on Friday after its earning announcement, PayPal stock closed at about $75. Schulman’s explanations about inflation and consumer skittishness didn’t seem to capture the full story.

It’s become commonplace to argue that companies like Square, Stripe, Chime and PayPal bulked up during the pandemic, both because people wanted contactless transaction and the steroid shots provided by government stimulus. PitchBook fintech analyst Robert Le recently said: “Fintech companies were some of the biggest beneficiaries of the pandemic: with a lot of financial services moving online, they were growing the fastest. Because they were growing so fast, a lot of fintech companies hired the fastest as well.” With lockdowns and stimulus payments largely gone, a reckoning period seems inevitable.

While that is of course true, it’s worth noting that PayPal’s stock is trading well below the price it commanded in mid-2019, before anyone had ever heard of COVID-19. That is striking, given that the company’s revenues and total payment volume (TPV) are higher than they were in 2019. There are several reasons for that, specific to PayPal and not just the overstimulated sector:

PayPal put out misleading numbers about its growth. For several years, PayPal boasted about the millions of accounts it was adding. Then, in February of this year while announcing its results from the fourth quarter of 2021, CFO John Rainey declared: “We identified 4.5 million accounts that we believe were illegitimately created. This number is immaterial to our overall base of 426 million customer accounts, but it affected our ability to achieve our guidance in the quarter.” Specifically, throughout 2021 PayPal offered $10 referral bonuses that apparently led to millions of bogus signups.

Perhaps it is a coincidence, but around the same time, PayPal told Wall Street analysts that it would focus less on acquiring new customers and more on squeezing extra cash out of existing customers, which it has done with some success. But some investors were put off by the fake accounts: the stock dropped 24 percent in a single day of trading, its worst ever. There are at least two class action suits maintaining that PayPal deliberately misled investors about its new account numbers. Such lawsuits are almost automatically generated when a stock drops dramatically and often amount to nothing, but the event did raise questions about how competently PayPal monitors its platforms.

PayPal’s growth story is over. Like many other fintech superstars, PayPal looked for a time as if it could grow and buy its way out of any difficulties. That time has ended, at least for now. TPV is a key indicator that analysts watch, and for the first three quarters of 2022, PayPal did not beat its TPV of last year’s fourth quarter:

Some of that slowdown is seasonal, some has to do with currency fluctuations, and, as Schulman told Bloomberg, some stems from consumer wariness in a time of painful inflation. But these are not the numbers the company wanted or analysts expected, and the immediate future does not promise much better growth.

PayPal’s profits are down. In the spring, PayPal famously announced it was shutting down its San Francisco headquarters, and also laid off employees at various offices throughout the US. These cost-cutting measures helped the company produce third quarter earnings that were above what most analysts predicted. Even so, the company is not as profitable as it was in late 2020 and 2021:

Make no mistake: PayPal is still a juggernaut, with international reach and crucial institutional connections that guarantee its continued success. But it in its current state, PayPal no longer looks like a gravity-defying technology pioneer; it looks like a mature company prudently reassigning resources and cutting costs to keep up its profits. 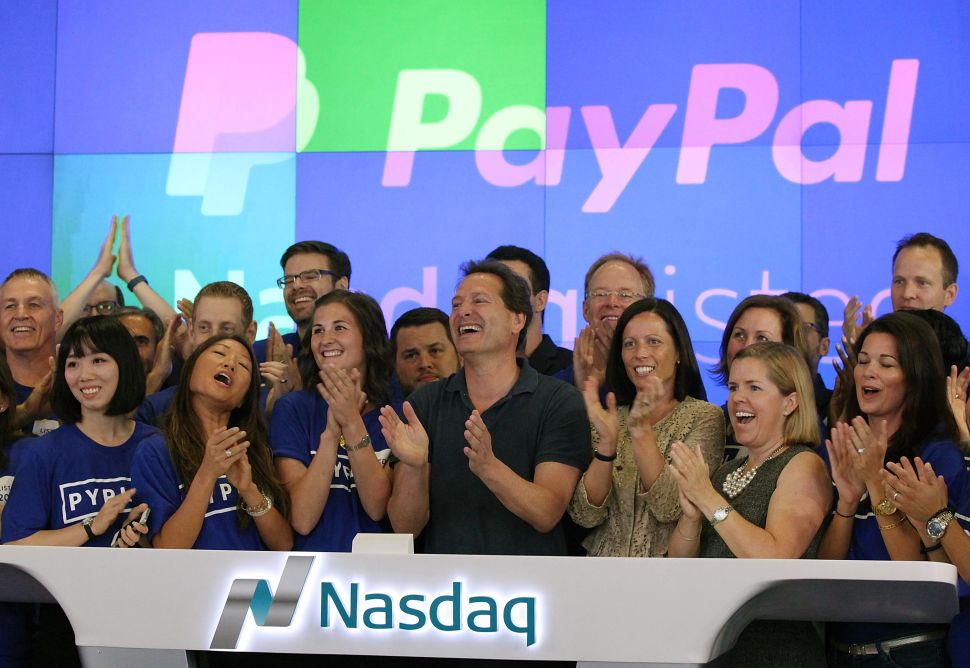