As debuts and galas are catnip to many opera-lovers, the Met’s season premiere of Rigoletto on November 10 followed three nights later by the return of the Richard Tucker Award’s annual celebration proved irresistible.

Bartlett Sher’s inept, glossy Weimar Republic Rigoletto which premiered on New Year’s Eve 2021 is now neatly described as “Art Deco-influenced.” It has returned, and a strong cast and vivid conducting have once again made Verdi’s masterpiece a Met must-see.

Rosa Feola and Quinn Kelsey as Gilda and Rigoletto are the primary holdovers from last season’s premiere, and they have deepened their already masterly portrayals. As the over-protected daughter whose reckless love for the seductive Duke results in her death, the radiant Italian soprano again movingly embodies the young girl’s burning desire for love. This time around, she may have simplified the challenging coloratura moments at the end of “Caro nome” that had given her difficulties previously, but otherwise she was in superb form, particularly during her three remarkably touching duets with Kelsey.

For this revival, the frighteningly intense baritone added even darker colors to his striking characterization, more brutal when taunting Ceprano and Monterone in the first act, more destroyed at causing his daughter’s destruction. In sovereign voice, Kelsey almost made the demanding role of Rigoletto sound easy. He and Feola were sensitively accompanied by Speranza Scappucci in her electrifying company debut. From the prelude’s softly ominous chords, the conductor gave notice that she was bringing a breathless intensity to Verdi. She and Kelsey conspired for a thrillingly fast opening for “Cortigiani” before slowing down for his heartbreaking plea that concludes the aria. Scappucci’s touch throughout was crisply alert and the orchestra and chorus responded enthusiastically. A woman conductor at the Met is still uncommon, so her initial entrance was greeted by a raucous welcome. She amply rewarded the audience’s enthusiasm with what should be the first of many appearances with the company.

The audience had to wait until the opera’s final scene to encounter Aigul Akhmetshina, another of the evening’s debutants, as Maddalena, the assassin Sparafucile’s lusty sister. The Russian singer was perhaps not shown to her best advantage in a role that requires a more pungent lower register. In her brief lyrical moments, she revealed a lush, captivating mezzo likely better suited to less dramatic music. Her amoral brother, however, was capably portrayed by veteran John Relyea whose pitch-black bass-baritone dripped with evil intent.

However, most of the evening’s excitement revolved around the long-awaited debut of French tenor Benjamin Bernheim as the Duke. The global pandemic prevented his first appearance at the Met originally scheduled for spring 2020 as Gounod’s Roméo, a poetic role probably better suited to his gifts than Verdi’s heartless seducer.

His opening “Questa o quella” was tossed off joylessly. and he didn’t show much delight in Rigoletto’s barbed comments. His blasé Duke suggested a man who has done it all too many times. His wooing of Gilda appeared routine rather than heartfelt; his momentary regret during “Ella mi fu rapita” superficial. Bernheim was at his most animated while manhandling Akhmetshina’s Maddalena during the final act.

Familiar from his two fine solo recital CDs on Deutsche Grammophon, Bernheim’s big bright tenor took some time to acclimate to the big expanses of the Met. Often he pushed his highest notes louder than necessary, holding onto them for show-stopping effect. Otherwise, he displayed a bold virile sound that became most appealing when he sang lyrically.

Whether from nerves or ill health, throughout the opening performance Bernheim displayed a most distracting tic: before he sang, he’d pinch his nose. I first noticed it before “Questa o quella” and thought nothing of it. But it recurred so often, it became difficult to ignore. The video posted by the Met of the Duke’s familiar “La donna è mobile” at the dress rehearsal shows him doing it three times in just two minutes; at the first performance it was four!

The nose-pinch phenomenon may be a tenor thing as I’ve noticed Michael Spyres do it occasionally and Michael Fabiano indulged once or twice during his appearances at the Richard Tucker Gala a few nights later. However, his didn’t distract from an ardent Faust duet with Christian Van Horn and L’Arlesiana aria, two of the  highpoints in the event’s return for the first time since 2019.

The evening felt particularly special as it took place in Lincoln Center’s newly refurbished Wu Tsai Theater at David Geffen Hall. The welcoming warmth and intimacy of the reconfigured auditorium was somewhat muted by the spectacularly ugly seat upholstery. Happily, the solo voices were flattered by the improved acoustics and the Met orchestra, once again led by the dynamic Scappucci, sounded splendid.

While Blue possesses one of the most gorgeous soprano voices before the public today, she rarely got the chance to shine Sunday, November 13. Clad in a most unbecoming tight bright yellow gown with red trim, she opened the concert tiptoeing nervously though a puzzlingly slow “Vissi d’arte” from Tosca. Though lovely, her brief Letter Duet from Le Nozze di Figaro with Renée Fleming was a downright odd choice, and Blue could scarcely be heard amid the roar of the truncated Aïda second-act finale. However, she and Ryan Speedo Green threatened to set the brand new stage on fire with the Crown-Bess duet from Porgy and Bess, but we’ve all heard her in that music before. Local Blue fans will have to wait until March for something new when she performs her first local La Traviata at the Met.

Seven other Tucker winners were on the gala’s roster; it would have been eight had Nadine Sierra not withdrawn, perhaps tired from her Met Traviata the night before. Eleonora Buratto jumped in to perform two excerpts from Madama Butterfly, her lovely soprano sounding twice as big as she had at the Met in Don Carlo, particularly in the full-throated love duet with Stephen Costello. Angela Meade, Buratto’s Don Carlo alternate, sang the grand finale of Donizetti’s Roberto Devereux. Though she produced an enormous, exciting sound, Meade made distressingly little of the words in “Vivi ingrato” and its ensuing cabaletta, but her stunning high D-natural at the conclusion inspired many in the audience to stand and shout “brava”!

Following her was an unenviable task, but Russell Thomas proved more than up to it. His magnificently commanding performance of Alvaro’s difficult aria from La Forza del Destino reminded us how much we’ve been missing as that opera has been absent from the Met for almost fifteen years. Thomas is clearly now the tenor for Alvaro if the Met ever gets around to producing this Verdi jewel.

His fiercest competition for primo divo of the night was Sir Bryn Terfel in a rare NYC appearance. His light-footed scamper through an aria from Boito’s Mefistofele (replete with ear-splitting whistles) was followed by a broadly humorous “If I were a rich man” from Fiddler on the Roof. He was clearly having as a good time as the audience.

Tucker galas rarely venture beyond French and Italian operas of the 19th to early-20th centuries, but Joyce DiDonato demanded a powerful aria from Gluck’s Ezio. Unfortunately. her overwrought dramatic commitment may have caused her to neglect her singing which was unusually wayward, often sharp and hollow.

No Tucker gala would be complete without a “you had to be there” moment. At the conclusion of Escamillo’s “Toreador Song” from Carmen, Frasquita, Mércèdes and finally Carmen sing “L’Amour” to entice the preening bullfighter. When Speedo Green neared the end of his brawny rendition, the stage door opened and first Fleming, then Blue and finally Di Donato entered, each eager to “out-sultry” the other: an instant camp classic! 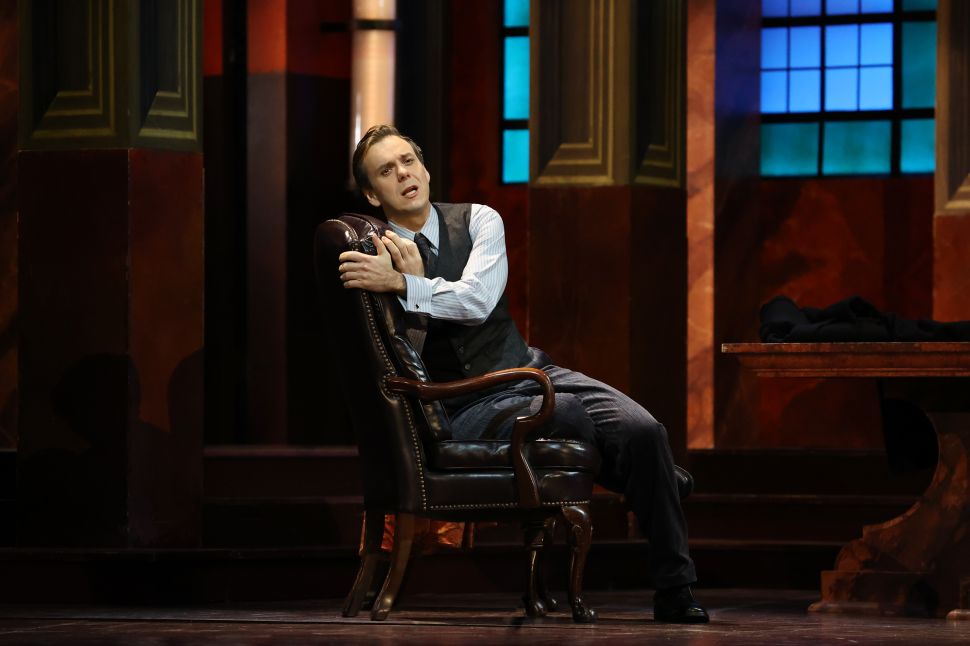