Prominent politicians, actors and businessmen across New York were hit with a slew of decades-old sexual assault allegations in the last week, after a state law passed allowing adult victims to file claims normally prohibited by the statute of limitations. While law professors and attorneys say the act reflects a more progressive understanding of sexual victimization, some argue that incentives for passing the bill stem not from a humane concern, but the financial benefits law firms will reap from litigation to come in the next year.

The Adult Survivors Act went into effect on Nov. 25, opening up a one-year window for survivors of sexual abuse who may have been unable to file claims at the time of their assault because of trauma or stigma. Minutes after the window opened, E. Jean Carroll, a former Elle magazine columnist, sued Donald Trump over an alleged sexual assault in the 1990s, which Carroll claimed took place in the dressing room of a luxury Manhattan department store. Other cases quickly followed, including allegations against Leon Black, a billionaire financier accused of raping Cheri Pierson at Jeffrey Epstein’s Manhattan mansion, and Robert Hadden, a former Columbia University gynecologist who has already settled nearly 150 cases.

The act additionally allows for institutions involved in sexual assault to be held accountable. Jan Roeg and Dorothy Carvello, two women who allege being sexually assaulted by Ahmet Ertegun, the co-founder and former CEO of Atlantic Records, filed suits against the record company for enabling Ertegun’s behavior. JPMorgan and Deutsche bank were also sued by women allegedly assaulted by Jeffrey Epstein, who claimed the banks continued to do business with Epstein even after allegations came to light.

And five women who filed a lawsuit against Bill Cosby on Dec. 5 named NBCUniversal as a defendant for “implicitly approving and ratifying the sexual assaults through inaction,” according to the complaint. Two of the plaintiffs, Lili Bernard and Eden Tirl, had roles on Cosby’s shows which aired on NBC.

Thousands of survivors are estimated to file claims

The inclusion of institutions and employers is a uniquely prominent aspect of Adult Survivors Act cases, according to Doug Wigdor, an attorney whose firm filed cases against Black and Ertegun. “For people who were adults at the time that this happened, it often happened at their work,” he said. The provision also means deep-pocketed companies can be potential defendants, creating more incentives for law firms to take the cases.

With the act just taking effect, many more cases are expected. Wigdor said his firm has been inundated with calls about the new law. And at least 750 former female inmates who were assaulted behind bars are reportedly preparing to file lawsuits against the New York State Department of Corrections.

“We’ve seen hundreds of survivors already announce that they are filing claims,” said State Senator Brad Hoylman, a Democrat who represents much of Manhattan and sponsored the act. The bill mirrors New York’s Child Victims Act, which opened a one-year window in 2019 for childhood survivors of sexual assault and brought about more than 10,000 cases, he said. “The reason we felt compelled to pass this legislation is because the statute of limitations for such crimes were punitively short, only one to five years,” said Hoylman, adding that the question remains open on whether the act will be extended further or implemented again in the future.

“When they pass these one-year things, the message is you better get your case filed in this one-year window because you’ll never get this opportunity again,” said Wendy Murphy, a former sex crimes prosecutor and a law professor at New England Law, a university in Boston. “There will be a scramble to the courthouse, it’ll be intense for one year.”

Some cases will generate millions for lawyers

Murphy, who estimates the lawsuits will generate a range from $100,000 to millions of dollars each in settlements, said the Adult Survivors Act was passed in part because of the financial gain to lawyers. In addition to receiving lobbying dollars directly or indirectly from law firms, a lot of lawmakers are themselves lawyers, she said. Nearly a quarter of all New York state lawmakers come from legal professions, according to a project from the Observer and Quartz.

“You have to ask, who stands to gain the most from the passage of this law? First thing that comes to mind is lawyers—it’s not that nobody else will gain, but they’re first in line to get paid,” said Murphy.

Holyman, a former attorney himself, said lawyers representing plaintiffs are key to moving these cases forward. “It’s a feature of our legal system, and to the extent that more justice is dispensed because attorneys want to take these cases, I say the better.”

But the act might not be as lucrative for lawyers as it appears, according to Erin Blondel, a research scholar at Columbia Law School. “I wouldn’t see this is a business generator,” she said.

The amount of time that has passed since victims endured abuse is lengthy, and could harm the success of these cases. “As time goes on, evidence weakens, people die, memories fade, documentation isn’t there,” said Blondel, who is also a former sex trafficking lawyer. “It’ll be harder to make those cases.”

Wigdor, who has already filed multiple cases under the act, including those against Black and Ertegun, said his firm donated and worked with Safe Horizons, a non-profit focused on victim assistance which advocated for the act. “Our firm doesn’t do lobbying, but we certainly financially support other organizations that stand for important issues,” he said. “So did other lawyers, we wanted bipartisan support of the Assembly to get it passed.”

An attorney representing Black, the investor accused of sexual assault, claimed Wigdor’s firm was attempting to financially benefit from the claims. “These latest allegations from the Wigdor firm are categorically false and part of a scheme to extort money from Mr. Black by threatening to destroy his reputation,” said Susan Estrich in a statement.

But it’s not just lawyers representing plaintiffs who benefit from these cases, according to Wigdor, who said he doubts Estrich and other defense lawyers are working pro-bono. “I’m sure she’s being paid a hefty price to put her name on this defense,” he said. “And frankly, I think she and others deserve to be paid for their work.” 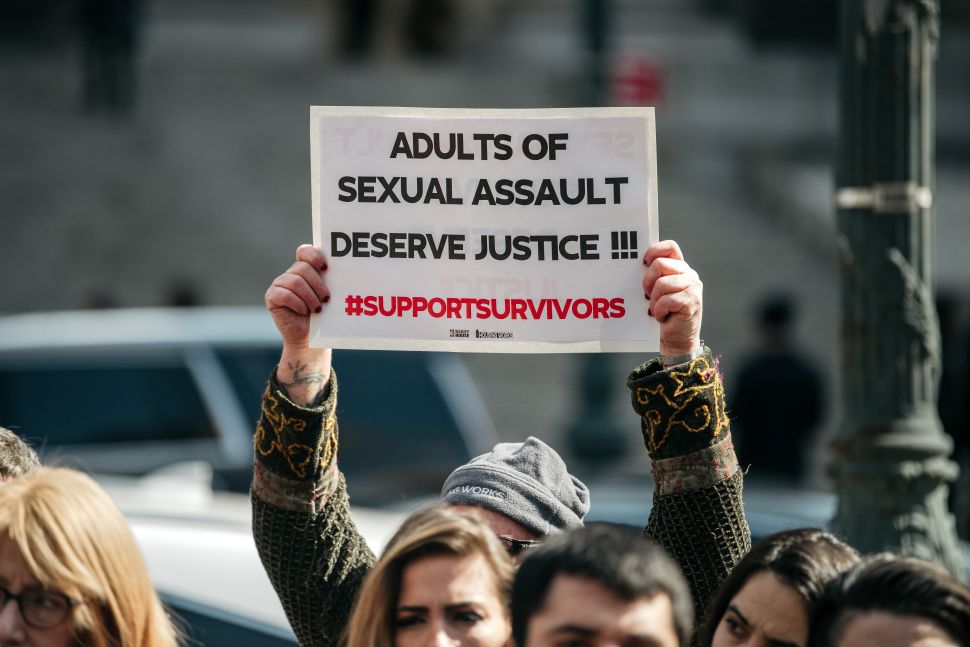