Growing up in Southern California, there was a familiar rhythm to family gatherings. My parents either schlepped my brother and me to the City (West Hollywood) to see my grandparents or to the Valley (Woodland Hills) where my aunt and uncle lived. Trips to the Valley were particularly exciting due to my aunt and uncle’s small yet hilariously eclectic VHS collection, including Disney’s The Black Cauldron, a fuzzy taping of Riverdance, and the crown jewel: A Rugrats Passover. During these visits, my brother and I often gravitated toward the Nickelodeon orange tape and would inevitably find ourselves parked in front of the living room TV, instructing an adult to “put our movie on.” No matter the time of year, we were eager to watch Tommy Pickles’s Grandpa Boris tell the story of the Jews’ exodus from Egypt. For many Jewish ’90s kids like us, watching the episode is like a ritual. And decades since its release in 1995, A Rugrats Passover remains the crème de la crème of holiday specials.

The season three episode begins with the Rugrats gang en route to Didi’s parents’ house for Passover. In one car, ever-bratty Angelica asks what the holiday is about while crumbling matzoh all over the backseat. In the other vehicle, Stu (not Jewish) attempts to get out of doing the Seder, lamenting the lack of presents at Passover, while Didi (Jewish) tries to explain the significance of the holiday and calm her less-than-supportive partner. Once they arrive, they find Didi’s mom, Minka, upset because her husband has disappeared after they had a tiff over their family wine glasses (extremely Jewish). Unbeknownst to them, Didi’s father, Boris, has accidentally locked himself in the attic. One by one, the babies and adults leave the Seder to go upstairs to see where everyone has gone, trapping themselves together as Boris recaps the tale of Exodus.

The special masterfully executes the “locked in a room” trope, explores what it’s like to host an interfaith Seder, gets into typical Pickles family drama and hijinks, and retells the story of Passover — all in about 20 minutes. It’s no easy feat to explain the ins and outs of a complex and meaningful Jewish holiday — where you don’t even get gifts — and make it exciting for a mainstream audience, but Rugrats nails it.

The biblical story is edited slightly, of course. The last of the 10 plagues is described as “taking away the firstborn,” rather than “death of the firstborn,” for example. And the tale is given the Rugrats treatment. At one point, Angelica — as Pharaoh — calls her dad, Drew, in a hilarious split-screen scene to double check if she’s his first child. (“Daddy? It’s me Pharoah.” “Oh hello, sweetheart, how’s Egypt?”) But, all in all, the show gets the essence of the holiday across. Jewish publication Hey Alma even “fact-checked” the episode, and found that the special is pretty faithful to the story of Moses and the Israelites.

But A Rugrats Passover isn’t just beloved because it successfully synthesizes a book from the Torah. It works because it feels Jewish.

In 1995, Nickelodeon executives tasked the showrunners with creating a Jewish holiday special to accompany the Christmas episode that had already been planned. Chanukah was the most obvious celebration to focus on, but the producers decided to go with Passover instead. (They released A Rugrats Chanukah to similar acclaim a year later in 1996.) Speaking to The Forward in 2020, Rachel Lipman, a writer for the episode, said, “Chanukah does fall at the same time of year, but it doesn’t have the same significance to who we are, and we’ve seen those before … we’d like to tell a story that has the same kind of weight that Christmas had.”

Lipman’s use of “who we are” in this quote is significant. Many members of Rugrats’ cast and crew were Jewish, and their desire to get the Passover story right was personal. In 2009, Melanie Chartoff, who voiced Didi and her mother Minka, wrote an essay for Aish describing how portraying Minka — a Yiddish-speaking Jewish immigrant — was a “belated Jewish education.” While the writers’ room for the Passover special comprised many Jewish writers, other episodes featuring Didi’s parents didn’t.

When Chartoff first landed the role, she thought Minka seemed “cliche,” but she made it her mission to infuse the character with depth. So, she and Michael Bell, another Jewish performer who voiced Boris, helped shaped their characters and improvised certain scenes. They replaced trite English phrases with Yiddish words and idioms when applicable. In the Passover special, for instance, Boris calls the babies kinderlach (children). Hearing a radical, endangered language on a deeply Jewish animated show is no small thing. Chartoff even went to the Fairfax area of Los Angeles — where my 102-year-old grandma still lives — to meet with Jewish immigrant women.

The authenticity of A Rugrats Passover clearly paid off. A Billboard article from October 1995 advertised the “upcoming video,” which Catherine Mullally, then-VP executive of Nickelodeon Video & Audio Works, said was the highest-rated show in the network’s history. The episode was nominated for numerous awards, including a Primetime Emmy. And in 2001, the special won a Jewish Image Award for Outstanding Achievement.

However, the episode’s success didn’t stop accusations of antisemitism. Variety called the special “sacrilegious” and went so far as to say some viewers might be offended. The Anti-Defamation League likened Tommy’s grandpa’s appearance to 1930s, Nazi-era parodies of Jews. In Danny Goldberg’s 2005 book, How the Left Lost Teen Spirit, he writes about the incident, noting that the Jewish president of Nickelodeon at the time, Albie Hecht, was “flabbergasted” by the criticism.

Stereotypical as Minka and Boris may seem to some, they are representative of what many white, Ashkenazi Jewish grandparents look like. An in-group depiction is not the same thing as an out-group caricature. Minka reminds me of my grandma, her sisters, and her friends. And her key role in A Rugrats Passover is part of what makes the episode feel so authentic and familiar.

Although the special doesn’t highlight a winter solstice celebration, it’s the perfect watch for any time of year as it taps into something fundamental about what family, community, and culture are all about: food, storytelling, preserving traditions for generations, and kvetching.

Rugrats broke ground as one of the first animated series to focus on a Jewish holiday. The 1995 New York Times review called it “a rarity.” Reflecting on those many nights my brother and I sat glued to the TV watching Tommy proclaim “Let my babies go!” I know now that the episode’s Jewishness was one of the main reasons I was drawn to it as a child. I saw grandparents voiced by Jewish actors who looked like my grandparents, used Yiddish like my grandparents, and told stories like my grandparents. I saw customs that looked like my customs. While there are many holiday episodes more famous (A Charlie Brown Christmas) and more timely (The OC’s Chrismukkah episodes), there are few specials as . . . special as A Rugrats Passover. Happy holidays. 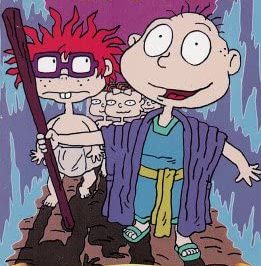