It’s hip to hate on Avatar, James Cameron’s 2009 sci-fi epic that made over $3 billion in global box office. I’ve been in and out of the haters club a few times over the past 13 years, but having recently re-watched it, I’m now convinced that if Avatar had underperformed commercially instead of becoming the highest-grossing film of all time, it would be defended as a misunderstood gonzo auteur masterpiece. “Why didn’t they make five of these?” we would ask, but because they are making five of these, we’re pissed about it. This is the energy I brought to my screening of the long-promised sequel, Avatar: The Way of . I was ready to say “fuck the haters” and embrace this 192-minute behemoth with both arms. I couldn’t make it happen. Watching Avatar: The Way of is like binging a season of television all at once, not because you don’t want to stop, but because you know that if you do stop you’ll never pick it back up again.

The Way of is set over a decade after the end of the first film, when soldier Jake Sully (Sam Worthington) defected from his corporate colonialist outfit and joined the ranks of the indigenous Na’vi to protect the lush moon Pandora from being plundered by humans. Now permanently transplanted into a tall, blue body that approximates the Na’vi form, he and his wife Neytiri (Zoe Saldaña) are raising four children and live in peace and harmony with their clan and their forest. Eventually, however, the forces of Earth return, determined to conquer Pandora as a replacement for their own spoiled world. In an effort to protect their village from Earth’s vengeance, Jake and his family flee their home and seek refuge on a remote island chain, where they are forced to learn a new way of life on the ocean. While they try to fit into a foreign and occasionally hostile culture, the war makes its way gradually but inevitably to their shores.

The above logline probably makes The Way of sound very derivative of the original, and to an extent, it is. Jake becomes a fish out of , is adopted into a new community, then fights to defend it, just like before. This time, however, he shares the spotlight with his four children and a slew of other characters, making this Avatar more of an ensemble piece. (Or, in Cameron’s own parlance, Avatar$.) This is fundamentally a good idea, as Jake Sully is not a terribly fascinating character to begin with, but the film’s focus is split in so many directions that none of its characters feel whole, even after three full hours.

Sully’s family is made up of cartoon characters, and not because they’re rendered by computers. In truth, most of the family-oriented animated movies I saw this year (like Turning Red or GDT’s Pinocchio) featured more complex protagonists than the heroes of The Way of . The technology is not the problem. The problem is that each subplot is about an inch deep at high tide, and they just keep coming, one after another. Every little episode has a beginning, middle, and end and advances the story only just so, making the film’s second act an exhausting marathon of predictable vignettes. Relief comes at last as the spectacular final battle begins, but even this overstays its welcome as it reveals a protracted three-act structure of its own, each with a distinct climax. The result is a three-hour movie that feels five hours long.

In these three hours, Cameron and company don’t actually add very much to the politics or philosophy of the first Avatar. Like its predecessor, The Way of preaches against the greedy and merciless exploitation of the natural world, begging the audience to reconsider its sense of entitlement towards it. This message isn’t getting any less relevant, but its delivery is even more ham-fisted and cornball than in the first film, which contributes to the Kids Movie vibe of the entire affair. It’s still critical of colonialism and the military-industrial complex, but the specific target of The Way of ’s allegorical lens is the whaling industry. James Cameron is on record saying that he might have retired from directing if he didn’t think that he could further environmentalist causes through the Avatar series, but I’m hard-pressed to think of a message that’s less controversial or less actionable for the average moviegoer in 2022 than “save the whales.” The sequel to the highest-grossing film of all time is an enormous platform, but despite this unprecedented bully pulpit, The Way of actually seems less brave than the first Avatar.

Where improvement can undoubtedly be measured is in the incredible visual effects. Most of the characters in The Way of are brought to life via digital performance capture, allowing for such tricks as 73-year-old Sigourney Weaver playing a Na’vi teenager. The Na’vi and their world are more stunningly lifelike than ever, the product of a decade of advancement and tremendous amounts of work. (Never let anyone dismiss the labor that goes into VFX as if someone simply presses a button that says “Render Movie.” It’s more like dressing a soundstage or operating a puppet while also inventing gravity.) However, even the quality of the effects occasionally works against the movie, as many theaters are projecting it at 48 frames per second (as opposed to the usual 24), which is impressive but immediately calls to mind video game cinematics or the TV in your dentist’s office that has motion smoothing enabled. A great visual effect should disappear, but for my part, the high frame rate combined with the fact that most scenes include no actual photography made it very difficult to shut off the part of my brain that was waiting for the cutscene to end so I could start playing. When live-action human characters do appear, it’s as off-putting as full motion video is in a modern PlayStation game.

James Cameron remains a tremendous action director, but he doesn’t offer much here that’s new. Remember how cool it was in Avatar when Neytiri shot an arrow through the windscreen of a helicopter and nailed the pilot through the chest? Well, in this movie, she does it like three times the exact same way. (Also, she does little else in the entire movie other than scream and cry, a serious disservice to Zoe Saldaña.) No one films the sea more lovingly than Cameron and there are some beautiful shots both above and below the waterline, but compared to the practically-achieved and yet utterly impractical glory of The Abyss, how can I be as impressed by this perfect digital ocean? The same guy who gave us the unique dynamic between Sarah and John Connor and the T-800 manages to make a family of blue aliens seem bland. Edie Falco is in this movie and gets nothing to do. I’m at a loss.

I’m honestly shocked to find myself coming down this hard on The Way of . My opinion on the first Avatar has wavered back and forth for a decade, and it’s possible I may come back around on the new one. The last thing I would have predicted I’d say after seeing Avatar 2 is “Maybe it’ll play better at home,” yet here I am considering that very thought. And, confronted with the inevitability of three more Avatar movies, I find myself pondering that alternate universe in which the first film had bombed, and my friends and I would toast to its memory and speculate on the sequels that too good for this world and never came to be. 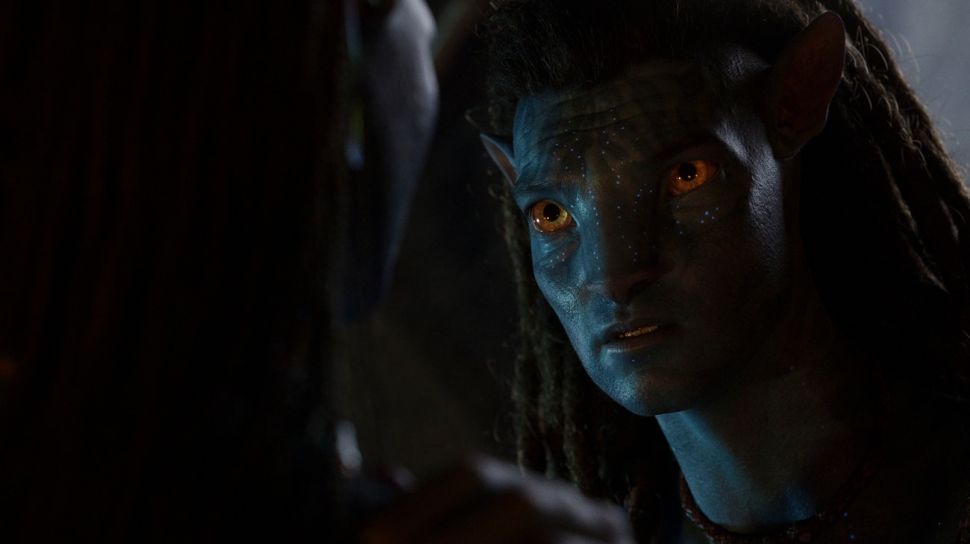