Nearly seven months into Russia’s invasion of Ukraine, many cities and streets are in ruins from air strikes and military shelling. Last month, street artist and political activist Banksy visited the country, leaving seven graffiti murals painted on the sides of war-torn buildings as symbols of defiance against Russia’s aggression.

Banksy posted one of his murals on Instagram— a painting of a young girl performing a handstand on the rubble of a destroyed building. The artist tagged the location as Borodyanka, a city in northern Ukraine. The town was seized by Russian troops early in the invasion and its civilian areas were heavily bombed. Hundreds of people were missing in the aftermath. Much of Borodyanka remains in ruin, yet the town also represents a fighting chance—in early April, Ukrainian forces were able to take back control of the area.

The painting of the gymnast serves as a symbol of remembrance and hope. It evokes Banksy’s signature tropes of childhood play, and resistance against violence. In the following week, six more Banksy-esque murals appeared in devastated areas of Ukraine. Audiences wondered if these were more of the artist’s original works, or copycats looking to incite similar messages through his style.

Banksy recently laid these speculations to rest in an Instagram video where he confirmed the other works are his as well. The video shows scenes from his November trip to Ukraine— Banksy creating stencils for his graffiti work, spray painting a new mural on the side of a destroyed building in Horenka Ukraine. The artist films his new piece: a bearded man scrubbing his back in a clawfoot bathtub. Horenka, a city northwest of Kyiv, was one of the sites of resistance where Russia’s invasion of the capital was blocked. Buildings now stand half-crumbled, their upper walls blown out, exposing rooms that are now unoccupied. The man in the bathtub is starkly visible among the scattered debris.

“For me, it means washing off all the dirt. The dirt of the Russian Federation,” says Tetiana Reznychenko, a citizen of Horenka who met Banksy and his team, in an interview with Reuters last month. “And this drawing makes me feel as if I have cleansed myself of the dirt that descended on us.”

In other parts of Banksy’s video, he unveils the rest of his artworks: a graffitied woman in curlers and a nightgown, donning a gas mask and carrying a fire extinguisher. A young girl balancing on one leg over a hole blasted through a wall, twirling a ribbon over her head. Two children see-sawing on the metal legs of a tank trap. A boy triumphantly flipping a much larger black-belt opponent on the backdrop of a decrepit wall. A military vehicle spray painted and positioned around a previously graffitied penis.

These images elicit the everyday lives of the people the invasion has afflicted, paired with the  morbid backdrop of battle-scarred buildings. Banksy’s new murals play on themes of innocence and humor, as well as the strength of the Ukrainian people.

It’s been over half a year since Russia invaded Ukraine, and the fighting still continues. The United Nations High Commissioner for Human Rights has recorded more than 6,595 civilian casualties since February, as Russian and Ukrainian soldiers vie for control. The destruction of these homes, schools, restaurants, and cultural sites have left a grim scene for those who have survived.

“My child used to go to this kindergarten,” a mother says in Banksy’s video, trying to wrangle her little girl wandering on the concrete rubble of her fallen school. The mural of the martial arts kid flipping over the doomed opponent looms in the background. The child buries her face into her mother’s jacket. “Don’t be sad honey. We already cried so much, we don’t have any tears left.” 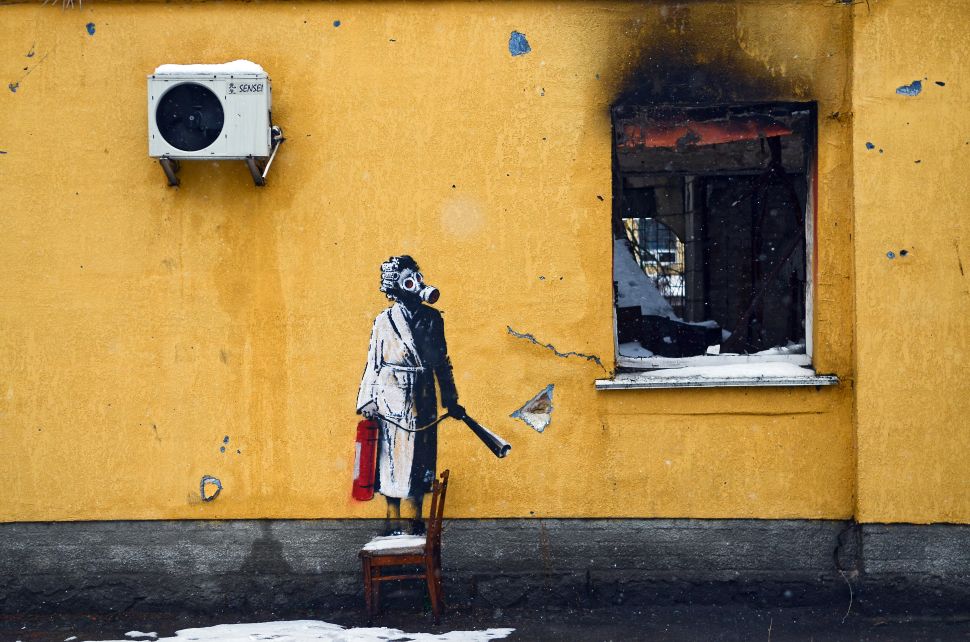