2022 has been a tremendous year for “Go Big or Go Home” cinema, from the conceptual and emotional smorgasbord of Everything Everywhere All at Once to the IMAX eye candy of Top Gun: Maverick and Nope to the maximalist masterpiece that is RRR. We’re also looking at a competitive awards season, with the likes of Tár, The Fabelmans, and The Banshees of Inisherin exciting the art house crowd. Somewhere in between are the mid- or low-budget studio or festival flicks that fit into neither the blockbuster or prestige categories, which could once expect a decent box office return but now disappear in between popular and critical event films. These are movies that get short theatrical runs before arriving unceremoniously on streaming services, or that go directly to streaming with relatively little fanfare.

Below, I’ve listed ten new films (in alphabetical order) I enjoyed this year that, for one reason or another, found themselves drowned in the Sea of Content. Nearly all of them are currently available to stream at home, where they will hopefully, eventually, receive the love that they deserve.

Athena (dir. Romain Gavras) Back when it was released on Netflix in September (after a short, awards-qualifying theatrical run), I wrote a review in praise of French director Romain Gavras’ stunning political drama Athena, suggesting it deserves some of the For Your Consideration dollars that the streamer surely had earmarked for White Noise, Blonde, etc. As yet, there has been no indication of that happening, but I stand by my assessment. This movie is dynamite. Athena opens with a masterfully choreographed ten-minute long take, following a band of disenfranchised youth as they raid a police station for supplies and race back to fortify their housing complex. After its explosive first act, the film simmers into a tense family drama between three brothers — a cop, a revolutionary, and a criminal — against the backdrop of a massive uprising. Coming in at a tight 97 minutes, Athena is a must-watch for anyone who enjoys when action and social cinema overlap.

The Contractor (dir. Tarik Saleh) Paramount dumped this Chris Pine vehicle into theaters and VOD this spring, where it went mostly unnoticed on either platform. Easily mistaken for a generic military action-thriller, The Contractor is also a deeply sad character study of a career soldier trapped in an endless cycle of redeployment. Neck-deep in debt and put out to pasture by the US Army, Pine’s Sgt. James Harper takes a gig with a private military company and quickly gets wise to their shady dealings. Soon, he’s on the run for his life from a squad of soldiers who are trapped in the same bloody workaday grind that he is. Director Tarik Saleh frames soldiering as awful work whose only products are corporate profits and human suffering. Bonus points for reuniting Pine with his Hell or High co-star Ben Foster, once again casting them as weary brothers in arms wrapped up in some dirty business. It’s now streaming on Paramount Plus.

Emergency (dir. Carey Williams) Released straight to Amazon Prime after premiering at Sundance, Emergency takes a great college comedy premise and packages it with some deadly serious stakes. Two college besties aim to be the first Black students to complete their university’s most famous bar crawl, but their plans hit a snag when a white girl with alcohol poisoning wanders into their house and passes out on their floor. Knowing that the authorities would almost certainly find a way to blame them for her condition, they endeavor to get the poor drunk to the hospital without being seen with her, hopefully in time to complete their history-making house party tour. Director Carey Williams and writer K.D. Dávila ably balance the film’s gross-out humor with its commentary on racial double standards and the cruelly precarious experience of being Black in America, and lead actor RJ Cyler (The Harder They Fall) steals the show with movie star charisma.

Emily the Criminal (dir. John Patton Ford) Less overlooked now than when I first assembled this list thanks to its strong Netflix debut this past weekend, Emily the Criminal is another Sundance favorite, a crime thriller for the gig economy era. Aubrey Plaza (who also produced the film) stars as the titular Emily, a working class Jersey girl whose police record has forced her into a non-stop parade of menial part-time jobs. When she’s invited to participate in a large-scale credit card scam, Emily seizes the opportunity to escape poverty and dedicates herself to ascending the ranks of the criminal enterprise. Aubrey Plaza has been pivoting away from comedy of late, bringing her “scariest person in the world” persona to projects in which it can be applied unironically, and here she’s a perfect fit. Emily is Plaza’s Michael Corleone, a character who erodes your sympathies so slowly that you almost don’t notice what’s becoming of her — or perhaps, what she always was.

Good Luck to You, Leo Grande (dir. Sophie Hyde) Essentially a one-room, two-person play, Good Luck to You, Leo Grande stars Emma Thompson as a retired ethics professor who decides to treat herself to a night with a young sex worker, portrayed by Daryl McCormack of Peaky Blinders. It’s simultaneously a cheeky comedy and an unambiguous Socratic argument for the legalization and destigmatization of sex work, as the two characters unpack the value of sex both as an important part of everyday life and as labor. Why is there so much guilt and shame associated with sex, and where does it come from? What do we gain, or lose, when we shed ourselves of that shame? But more than a mere philosophical exercise, Good Luck to You, Leo Grande is sweet, sexy, and certainly the new favorite film of Father Intintola from The Sopranos. (If you know, you know.) It’s now playing on Hulu.

Not Okay (dir. Quinn Shephard) One of a string of 20th Century/Searchlight films that skipped theaters and went straight to Hulu this year, Not Okay is a cutting dramedy that dissects fame and infamy in the social media age. Zoey Duetch stars as a wannabe influencer who fakes a trip to Paris, and when the city is rocked by a terrorist attack, doubles down on the lie and becomes the new face of PTSD. Not Okay is an unflinching look at not just the superficiality of influencer culture but the ghastly commodification of trauma and tragedy that “raises awareness” but rarely actually helps anyone. Duetch is fun as the film’s loathsome protagonist, but it’s newcomer Mia Isaac who runs away with the film as a teenage gun control activist whose very real pain is co-opted by Duetch’s vain and vapid quasi-movement.

On the Count of Three (dir. Jerrod Carmichael) Jerrod Carmichael’s been a busy guy this year; in addition to releasing an HBO special and hosting SNL, the stand-up comedian also starred in his feature directorial debut, the pitch-black comedy On the Count of Three. Carmichael and Christopher Abbott play lifelong friends who agree to a suicide pact and decide to use their last, consequence-free day on Earth to exact revenge on the people who wronged them in life. The fact that Carmichael and company can make this premise remotely funny for any period of time is impressive enough, but they also do so without undercutting the tragedy of the characters’ circumstances or mental illness. It’s a surprisingly sensitive film, considering the subject matter, and could maybe even stand to be darker or meaner than it is. Simultaneously funny, depressing, and life-affirming, On the Count of Three isn’t a macabre masterpiece like, say, Barry, but it scratches a similar itch. It’s currently available on Hulu.

Resurrection (dir. Andrew Semans) Resurrection is a bizarre thriller that, until the release of Tár last month, boasted my single favorite screen acting performance of the year. Rebecca Hall portrays a put-together businesswoman and single mother who becomes unhinged after a man from her past (Tim Roth) returns to torment her. By “torment,” I mostly mean “hang around in places he knows she’s going to be and not say or do anything,” and that’s more than enough. Hall sells Roth’s menace almost entirely on her end for half the film, before finally explaining their history in a long, single-take monologue made directly to camera that it’s absolutely impossible to look away from. Resurrection is an unapologetically weird film, an anxiety engine that tightens like the spring of a wind-up toy for 100 minutes without ever slowing down or letting go. Appropriately, Resurrection has found a home on the horror streaming service Shudder, which is included with an AMC+ subscription.

The Sea Beast (dir. Chris Williams) A Netflix original animated film from the director of Disney’s Moana, The Sea Beast is a nautical fairy tale about (checks notes) class consciousness and manufactured consent? Hailing from a chain of islands whose trade routes are also the home of giant sea monsters, young Maisie Brumble (voice of Zaris-Angel Hator) dreams of a short, glorious life as a monster hunter. When she stows away aboard a legendary hunting vessel, she joins swashbuckler Jacob Holland (voice of Karl Urban) on a quest to catch and kill the biggest baddest beast in the ocean. But, as they draw nearer to their prey, they’re forced to question the very nature of their mission. Why do they do what they do? Who benefits from a culture that worships death; not just the deaths of their enemies, but of that of people they sacrifice to defeat them? The Sea Beast washes down this heavy thematic material with a playful tone and exciting, well-designed action. It’s not the year’s best Netflix animated film (that would be Guillermo del Toro’s Pinocchio), but it’s a strong second place.

Three Thousand Years of Longing (dir. George Miller) The director of this century’s best action film, Mad Max: Fury Road, returned this year with a colorful, imaginative, and heart-wrenching adult fantasy, and practically nobody went to see it in theaters. Tilda Swinton and Idris Elba star as a divorced academic and the lovelorn djinn that she accidentally releases from centuries of captivity, respectively. The scholar is too familiar with cautionary tales about wishes gone wrong to risk indulging herself, so the djinn instead regales her with the story of his life and how he became a prisoner of love three times in as many millennia. While Swinton and Elba’s portion of the film is set mostly in a Turkish hotel room, the djinn’s stories play out like living paintings, a moving picture book about love, lust, and loneliness. Visually rich and thematically dense, Three Thousand Years of Longing muses on romance and possession, as well as the slow death of mythology and folklore at the hands of science and capitalism. It also boasts the year’s best original score, a surprisingly romantic and lyrical turn from Tom “Junkie XL” Holkenborg. Three Thousand Years of Longing has yet to land at a streaming service, but being an MGM release, will probably end up on Amazon Prime next year. 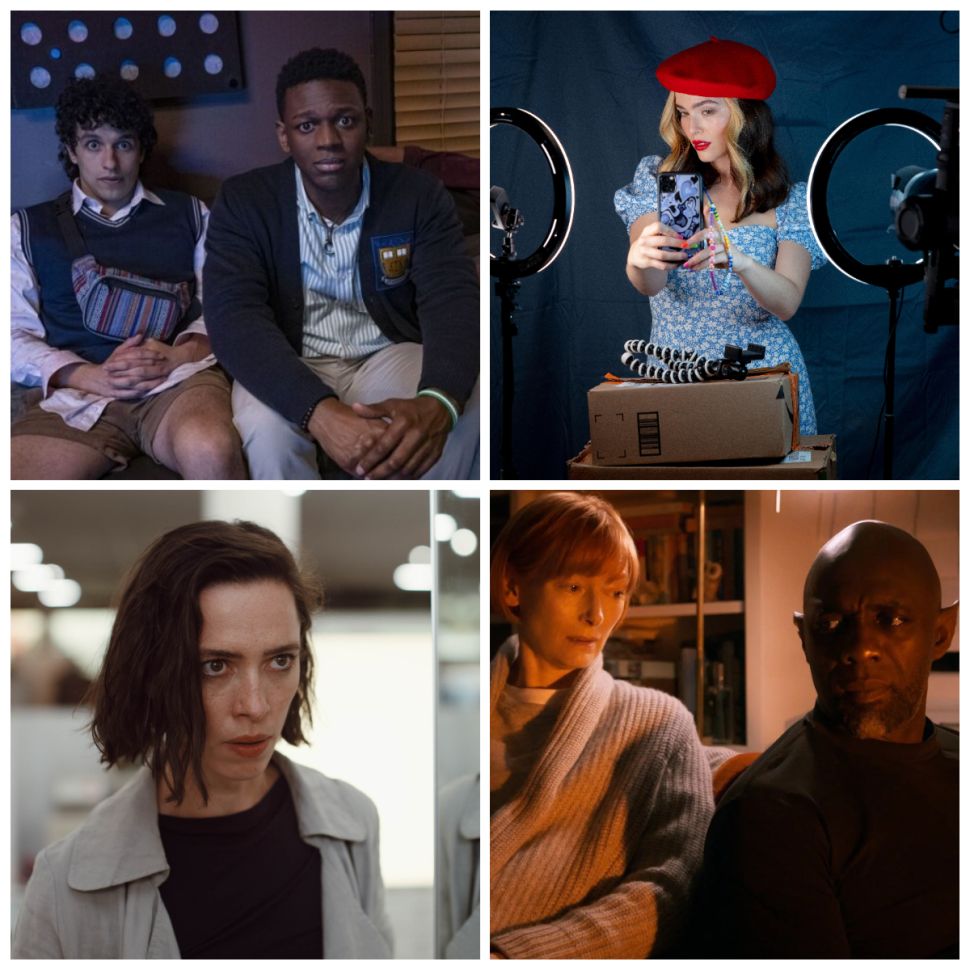