I have never written a gift guide, but I cover fitness, so in late fall publicists invariably clog my inbox hawking various “must-have” exercise-adjacent items, from 15-dollar headbands to treadmills that cost more than rent. As an avid exerciser, I covet most such gifts, but occasionally they horrify even me: A smart tape measure that records body fat to the millimeter. A program that promises to whittle clients to their “tiniest.” A book nominally about “self-care,” but packed with old-fashioned diet deprivation.

I tried the stupid tape measure, and as my flesh swelled around the ribbon encircling my thigh, I shuddered at the thought of receiving this intimate, inherently judgy device as a present rather than a promotional sample. And yet: while this was an extreme example, don’t all fitness gifts on some level offensively imply that the recipient should take better care of their bodies? If so, why are they so ubiquitous?

Well, fitness gifts can be amazing: back in grad school, my then-boyfriend bought us memberships to a fancy gym unfathomable on my budget. I still remember how my stress lifted the moment I hit my stride on the smooth, sturdy treadmills or slathered on the unlimited moisturizer in the locker room. These were rare luxuries in those dissertation-writing days, and after the holidays, I excitedly told a friend about this thoughtful gift. Her face clouded with disapproval as intense as my delight. Sure, as a feminist, I knew what a guy buying his girlfriend a gym membership looked like, but I tried to explain how happy it made me. She was unconvinced.

So what accounts for this ambivalence? How is it that these presents—wearables, class packs, athleisure, a Peloton—are such staples, yet as likely to provoke pleasure or offense? The answer is in our culture, exercise exists both as another item on a maddeningly endless to-do list of self-maintenance and as a blissful form of “me time.”

It wasn’t always so. Fitness was weird for much of American history, a spectacle to behold rather than a daily activity, much less holiday gift fodder. In 1918, for example, a popular diet authority encouraged women to begin a regime of diet and gentle movement, but warned of jealous husbands who preferred their wives out of shape and insecure. Advice for women gearing up for Christmas 1922 barely mentioned exercise, only cautioning that “making a hog of yourself” was as unseemly as extravagant gift-giving. Exercise devices for men were mostly advertised in the back of comic books and touted their discretion, since few men wanted to be outed as spending time or money on superficial bodily cultivation.

Thanks to television, in the 1950s these attitudes evolved. Jack LaLanne hailed from Muscle Beach, a national tourist attraction. Yet on his eponymous television program, he instructed millions of homemakers that daily exercise was no spectacle or solipsistic distraction: it was a wifely responsibility akin to laundry. His message resonated with women socialized to understand the home as an extension of the self;  LaLanne explained core exercises as tidying “the front and back porch.” The holiday season only intensified this association, as vacuum cleaners were marketed as “practical, enduring, and beautiful” gifts for women and a 1958 ad for the Magic Couch, a massive, vibrating weight-loss device, promised to deliver women, via their husbands’ wallets, a “new figure for Christmas.” Exercise was no longer strange to many women, but a requirement of ladyhood.

Workout as wifely duty was amplified—and sexed up—in the 1960s by Corpus Christi secretary Debbie Drake, who parlayed her personal triumph over “figure trouble” into a nationally syndicated television show and column. The “most gorgeous calisthenics teacher in the country” did not see exercise as drudgery, but as a path to desirability for “the matronly Mrs. who would rather be whistle-bait.” Her 1964 record How to Keep your Husband Happy made clear who this work was for: the cover features a man in a cardigan and slacks relaxing, a thought bubble filled with images of bare-legged Debbie smiling and exercising. The “hot wife” archetype had arrived, and exercise was imperative to embody it. A woman who accepted her thickening waist and thighs, Drake declared, would be “a disappointment to her husband” and “threat to family contentment.” She had herself to blame, though a Debbie Drake holiday card offered hope, wishing “Merry Christmas and a slimmer new year.”

Strength and sexiness, however, are not inherently a service to others. To LaLanne’s credit, he had planted the seeds for exercise to be defined as the opposite: “me time.” Studio executives had at first doubted homemakers, or anyone, would make time in their day for fitness. But when LaLanne invited women to “get up out of that easy chair” or set aside their housework because they deserved the joy and satisfaction of exercise, many listened. Two decades later, second-wave feminism made such sentiments and the time to pursue them feel more like a right than a duty. Sure, exercise could perpetuate patriarchy—slender, agreeable wives were less inclined to burn down a system that benefited them—but it could also abet liberation. Anti-rape activists taught self-defense while New Age seekers offered prenatal yoga. In less explicitly political spaces, joggers unapologetically took to the streets to build speed and strength, while Jazzercisers dropped their kids at childcare and invested time and money to dance and sweat together.

One paradigm did not neatly replace the other. The 1978 bestseller Fat is a Feminist Issue, for example, exploded the idea that girth correlated to self-worth or that dieting was a way “to get/hold a man.” Yet rather than embrace fat liberation, it promised that once a woman “reclaimed her power” to reckon with “why she got fat in the first place,” she could achieve “weight loss with satisfaction.”  The slim, spandex-swathed women in Jane Fonda’s landmark 1982 Workout resembled Debbie Drake, but its professed ethos was the antithesis: “to create more realistic, less anxiety-ridden standards.” The growing fitness marketplace only underscored not its popularity but ambiguous social meaning: gifts of an aerobics VHS tape, a sleek sports bra, or a silver-tipped “jogging stick” all suggest the leisure and labor that sweat has come to signify.

Exercise is for everybody, but I focus on women for a reason: our autonomy over our bodies and our time is precarious, so a gift of exercise that requires investing time working on our bodies is understandably fraught. That said, as fitness has become a broader phenomenon, the pressure to participate—and the shame if you don’t—affects most everyone. By the late 1970s, ”the perfect holiday gift for someone you love or for yourself” was a “fitness smorgasbord” in which idleness was not on the menu of  “jogging,walking, at-home exercises, fitness clubs and spas, snowshoeing and cross-country skiing.” Fitness enthusiasts were easy to shop for, a 1987 gift guide advised, but fitness was also ideal “for the couch potato: sign him or her up for an exercise class that you can go to together.” The “confirmed TV tater” merited an even greater investment in  “a rower or stationary bike they can use while watching.”

Kids were newly subject to such pressures as marketers capitalized on the growing consensus “you can’t sit and get fit,” targeting the remote-control-dependent “young boy [who] no longer pushes his dumptruck down an imaginary highway” and little girl who “no longer takes the doll’s hands and dances merrily with her,” but simply “winds the key and sits and watches her doll pirouette and bow.” Christmas should be an “active holiday season” with gifts that “require physical activity on the part of the recipient.” By the 1990s, Better Homes and Gardens recommended a digital calorie counter as a stocking stuffer, asking rhetorically, “What better way to tell someone you care about them than giving a gift that keeps them healthy and safe?” Such gifts became as much about signaling the virtue of the giver as the recipient, the Boston Herald illustrated in 1999, recommending readers abandon “perfume, ties, slippers, and chocolates this holiday season, [for] something that will truly benefit your beloved.”

Holiday shopping is fundamentally materialistic, and exercise has in recent years become a vehicle not just for pleasure or pressure, but also conspicuous consumption. No incident illuminates the intense and conflicting emotions we hold about the fitness gift as vividly as the 2019 fracas over Peloton’s holiday commercial. A slim white woman receives the bike as a gift from her husband, and with a wild-eyed hostage look, chronicles her “journey” from timid exerciser to relentless road warrior. The ad was easy fodder for an internet culture that thrills in skewering privileged oblivion: a husband so rude and rich that he spends thousands on a torture device for his already slim wife! A woman who has so internalized patriarchy and productivity imperatives that she believes she needs the bike, and is even grateful for it!

Just months later, however, such mockery fell flat. The pandemic made Peloton and its more affordable imitators a lifeline to the lost world of communal exercise. In a moment marked by limited opportunities for exercise and indulgence—and trauma and uncertainty—Peloton’s waiting lists swelled, filled not only with the wealthy but those financing their bikes or sharing memberships within a household. By December, these bikes—and kettlebells, yoga mats, and resistance bands—were almost impossible to procure due to demand for home fitness equipment. A year later, Omicron thwarted many people’s planned return to gyms and studios. Exercise, I was reminded while I first awaited my backordered bike, and then made my way tentatively back to the same gym where my now-husband first bought me that membership years ago, need not be an activity we do for others or our appearance, but for ourselves. When we remember this, at any time of year, a gift of fitness can feel like freedom. 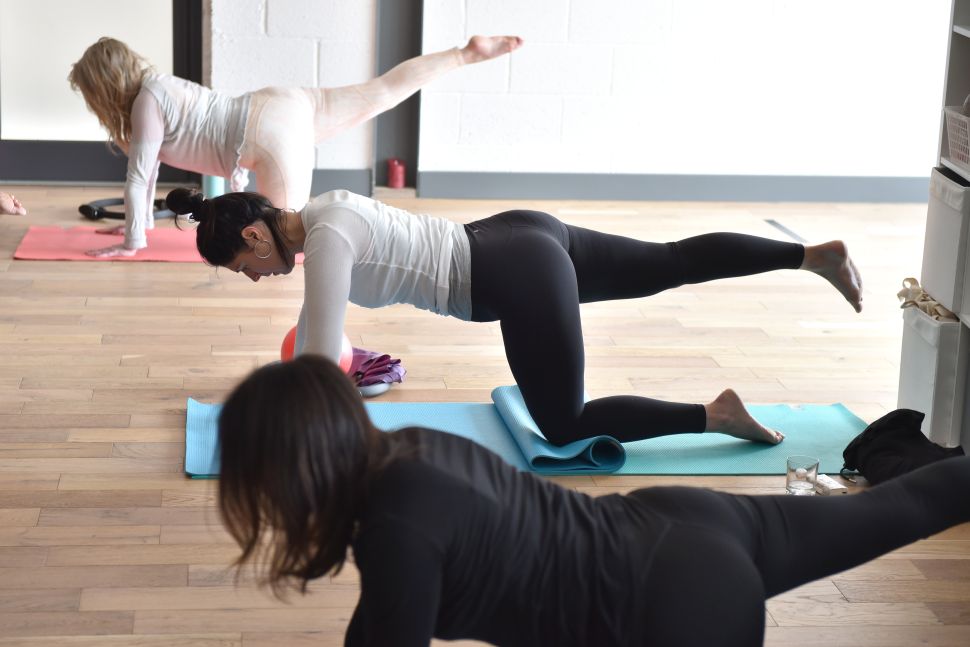