Almost Famous: The Musical, now on Broadway, seems kind of like a no-brainer for a modern Broadway audience, but its journey to the Great White Way took over 20 years. The 2000 movie was a fictionalized version of the true story of Cameron Crowe and Neal Preston, who began writing for Rolling Stone in 1972 when he was just 15. Fans of Almost Famous (or the rock journalism Crowe wrote before he started making movies like Say Anything… and Jerry McGuire) enjoy deciphering the real incidents behind the movie’s plot—the rock star who refused to confirm the details of interview to a fact checker (Russell Hammond of Stillwater in Almost Famous) is supposed to have been Neil Young; Jimmy Fallon’s character seems based on Irving Azoff, manager of the Eagles; and both Bebe Buell and and Miss Pamela have been suggested as models for Band Aide (not groupie) Penny Lane.

Speaking with the Observer shortly before the musical’s November 3rd Broadway premiere, Crowe was all smiles, full of sincere and bubbly delight at a party where legendary photographer Neil Preston’s production stills from both the movie and the musical were on display. The show is a full circle moment for the lifelong friends, who are ecstatic that after years (and Covid delays) their story gets to be told again.

It isn’t hard to understand how Crowe made his name as a journalist. Before we can start talking, Crowe cheerfully asks a question first, “What’s your favorite Halloween movie? Somebody asked me on the street what it was. It took me forever and I chose wrong and I realized later, it’s Ghostbusters. It has to be Ghostbusters.”

Going on to discuss how the musical came to be, Crowe pauses. “I’ve never made a sequel,” he says. I’ve always felt you plant the flag, it waves or it doesn’t. People love it or don’t love it, but you don’t mess with the flag you’ve planted. But this isn’t a sequel, and I was really excited by what this could be onstage.” Crowe penned the musical’s book and co-wrote the lyrics with composer Tom Kitt, a Broadway vet who won a Tony in 2009 for his score to Next to Normal and did the orchestrations for the musical versions of Jagged Little Pill and SpongeBob SquarePants. “He taught me so much,” Crowe says of Kitt. “I’d love to work with him again.”

Neal Preston’s involvement with the show was a mirror of the original story — Crowe and Preston worked together on Rolling Stone stories about Led Zeppelin and others, and Preston documented the journey of Almost Famous: The Musical from workshops in San Diego to previews on Broadway. “I’m just a cheerleader,” Preston demurs. “If you know mine and Cameron’s story, you’ll know that he’s my best friend for 50 years. I shot the stills on the movie, I shot the stills for the Broadway show. I was there in 1973 with him for everything we did!”

There are lots of little moments in the Almost Famous musical that have a life of their own. Crowe was especially excited to get the “Ice Room Scene” into the musical, a deleted scene from the movie that shows Penny (Solea Pfieffer) and Russell (Chris Wood) flirting and bonding by the ice machine of a Los Angeles hotel. In the musical, Crowe explains, “it’s a duet with Solea and Chris Wood. I just always liked that ice room scene.”

Crow once wrote that when he showed a draft of the Almost Famous script to Steven Spielberg, the response was: “Direct every word.” And he pretty much did. “We shot so much for the movie,” Crowe says. “But when writing this, we just went back to my family. Which was the origin of both the movie and the play. We want to just tell the story of these characters and see how we do. Not do a jukebox thing — I wanted to see if we could recreate that magic we had with the movie. That elixir. I didn’t know if we could do it or not.”

Asked if the “Lock the Gates” scene—in which the Stillwater tour bus rams an electric fence to break out of an arena parking lot, and which is now used in the opening of Marc Maron’s WTF podcast—made it to Broadway, Crowe laughs. “No, electrocution doesn’t make it in, but I’m so happy you asked me about that. If I could go back in time and add one more thing to the movie, I’d add another scene with Doris the bus.” The one pivotal scene that he needed to make work for the stage was, he says, the plane scene, which sees the band confessing secrets when their private plane begins dropping due to what they don’t know to be turbulence. “I was so worried about how that would translate,” he says. “And the actors just sell it.”

Crowe pauses again and smiles. “Here’s why it’s been great to come here. The actors that made Almost Famous the movie was the last time I really felt there was like a real community among the people that were making it. Sometimes you never meet the people who are in your movie for more than an afternoon. But the Almost Famous cast, none of them were so huge they had to leave for other commitments. We were together for months and months and months, which never really happened again. Until this play happened, I see the thing that links the two productions. It makes me so happy. Really beautiful. You see the relationship that the actors have with this new cast, they have their own thing now.”

For Preston, it’s full circle as well. He got his start shooting theatrical productions in New York. His father, Edward Preston, was a production stage manager, working on Broadway golden age classics like the original King and I, My Fair Lady, and Camelot. “I grew up around this,” he says. “Theatrical people, theatrical productions, theatrical lighting. It’s where I got my sealegs and then transitioned into rock and roll. Shooting stills for Almost Famous; The Musical is like coming home.”

When asked if he’d like to adapt any other work of his for the stage Crowe says, “Maybe something original! That would be so fun.”

Preston smiles. “I don’t need anything else, man. This celebrates the movie and celebrates mine and Cameron’s life.”

“Look, everyone thinks their life is a movie,” he continues, “but we can actually say that! We really had a movie of our lives, and now a Broadway show.” 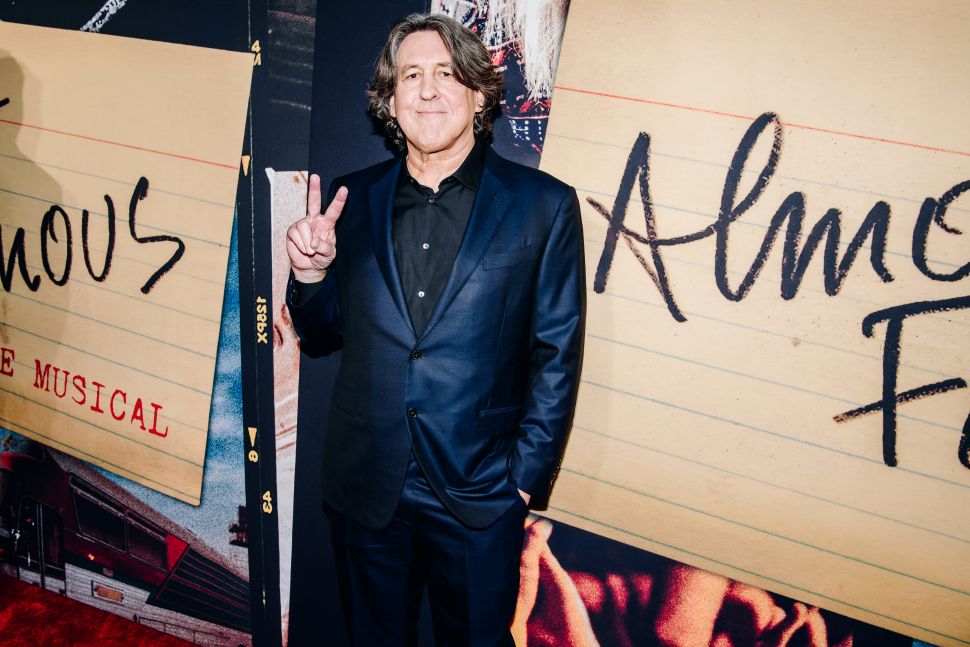