The holidays are a time in which the connections to family and dreams of peace are deeply felt. It’s fitting, then, that so much Christmas entertainment comes courtesy of performers that are, quite literally, felt.

Like Charlie Brown and Rankin-Bass, the comedic warmth of The Muppets is required viewing while trimming the tree or wrapping presents. Kermit the Frog, Miss Piggy, Fozzie Bear, The Great Gonzo and company most notably made spirits bright in The Muppet Christmas Carol, an acclaimed version of Charles Dickens’ classic tale that celebrates its 30th anniversary in 2022. (It’s being screened at the Museum of the Moving Image on December 17 and 24, and Disney+ recently reissued the full-length version of the film, featuring a celebrated musical number omitted from home video releases.)

But Jim Henson and his team were making merriment on the small screen for more than a decade before The Muppet Christmas Carol hit theaters. And The Muppets have pressed on with holiday cheer long after Henson’s passing in 1990. Here’s a look back at 10 notable Muppet Christmas specials — some with familiar faces and guest stars, and some that showed just how out there Henson’s company could be.

The Great Santa Claus Switch (1970): Before The Muppet Show (or even Sesame Street) made Henson a television icon, the quirky creator took his Muppet concept wherever it could go. In the ‘60s, that meant offbeat commercials and a handful of sketches on The Ed Sullivan Show. Sullivan loved The Muppets enough to give them a whole timeslot near the end of his tenure. Here, a troupe of elves works together to stop a con artist from replacing Kris Kringle – both human roles being played by The Honeymooners’ Art Carney. It’s as rough-hewn as most early Muppet appearances, but the seeds of future brilliance are surely there.

Where to watch: Officially, the only way to see this is to request a viewing at the Paley Center. Or you can just check YouTube.

Emmet Otter’s Jug-Band Christmas (1977): The first major Muppet holiday hit featured almost none of the usual gang of characters (Kermit served as the show’s narrator). Instead, it took inspiration from a children’s book by Russell and Lillian Hoban, showcasing the critters of Frogtown Hollow as they work to make Christmas jolly on a budget. A cult favorite since its early airings in America on HBO in the late ‘70s and early ‘80s, Emmett is notable for being the first Muppet work to feature songs written by the incomparable Paul Williams. (He’d earn an Oscar nomination three years later for the gorgeous “Rainbow Connection,” from 1979’s The Muppet Movie.)

Where to watch: Emmet Otter was released on Blu-ray in 2018 and currently streams on Prime Video and Peacock.

John Denver and The Muppets: A Christmas Together (1979): Midway through The Muppet Show’s five-season run, the gang joined forces with a favorite host, country-pop hitmaker John Denver, for a delightful one-hour network special. The Muppets’ vaudevillian charm meshes well with the aw-shucks-far-out style of Denver’s hosting, and the music they make together — released on a million-selling soundtrack album — is some of the best holiday fare you could ask for, from standards (a cheeky “Twelve Days of Christmas”) to pop faves (Dr. Teeth and The Electric Mayhem taking on The Beach Boys’ “Little Saint Nick”) — plus a joyous reprise of the Emmett Otter chestnut “When the River Meets the Sea.”

Where to watch: Curiously, this one’s never come out on any video format. Make time to either stream the soundtrack, or book an appointment at the Paley Center, which has a copy for viewing.

The Christmas Toy (1986): One of the stranger Muppet works overall, this ABC special again sidelined the usual characters for a dark story about a troupe of living toys that weirdly bears a passing resemblance to the plot of Toy Story. This special skipped to the “Buzz and Woody hold hands accepting their fate in a garbage incinerator” vibes much quicker, however; a central conceit involves how these toys will permanently freeze and die if spotted by a human. Cheerful stuff!

Where to watch: For the truly curious, it’s on Prime Video or Peacock, complete with a by-now typical narration from Kermit.

A Muppet Family Christmas (1987): While Jim Henson spent the ‘80s experimenting with his craft on film (The Dark Crystal, Labyrinth) and television (The Storyteller, The Jim Henson Hour), he never fully left Kermit and the gang behind. In fact, A Muppet Family Christmas may be one of his biggest statement pieces involving the core characters. This time, the regular Muppet gang visits Fozzie’s mother right before a blizzard, and the casts of Sesame Street, Fraggle Rock and even Muppet Babies are along for the ride. In a time before crossovers of this kind became common (and repetitive), there’s a real charm here — especially considering it’s one of the last times they’d all get together while Henson was alive.

Where to watch: Though not streaming, an edited version is available on DVD.

The Muppet Christmas Carol (1992): On its face, The Muppets adapting an old Christmas standard shouldn’t go past merely pleasant — especially in the wake of Henson’s passing. (His son Brian took over as director.) But The Muppet Christmas Carol is pure magic, thanks chiefly to creative designs for the Christmas spirits — which were initially going to be existing Muppets until smarter heads prevailed — and the stone-cold serious performance of Michael Caine as Ebenezer Scrooge, the reason everyone on Twitter loves to recast movies with Muppets and keep one flesh-and-blood actor. Also crucial: the first new batch of Muppet songs by Paul Williams after his recovery from substance addiction, which adds a dash of bittersweet pathos to the proceedings. (Seriously, why did they cut “When Love is Gone”?)

Where to watch: Both cuts of the film are now on Disney+; the full-length version can be accessed under the bonus features tab on the movie’s page.

Mr. Willowby’s Christmas Tree (1995): Nearly 20 years after Emmet Otter’s Jug-Band Christmas, the Henson company adapted another children’s book, this time featuring both original Muppet creations and a handful of human actors, including Robert Downey, Jr. as the title character and Leslie Nielsen as his butler. Beyond the novelty of seeing the future Ally McBeal addict-turned-Iron Man navigate through children’s fare, there’s not a whole lot to recommend from this brief special — except for a narration from you-know-who.

Where to watch: Never officially released, but easy to find on YouTube.

It’s a Very Merry Muppet Christmas Movie (2002): A decade after The Muppet Christmas Carol, Kermit and friends were inserted into another holiday classic: It’s a Wonderful Life. After a scheming banker (Joan Cusack) attempts to foreclose on the Muppet Theater, a forlorn Kermit wishes he’d never been born — so a bumbling angel (David Arquette) shows him how bleak that world would be. Full of gags that are both dated (Steve Irwin references! Cameos by the cast of Scrubs!) and insane (without Kermit, Scooter is found dancing in a cage in a seedy nightclub), this one gets kind of close to recapturing that madcap Muppet magic.

Where to watch: It’s not streaming on any of the major networks, but It’s a Very Merry Muppet Christmas Movie is available to buy or rent digitally or on DVD.

A Muppets Christmas: Letters to Santa (2008): This pleasant little TV special is full of heart and hilarity as Gonzo leads the gang on a journey to the North Pole to help a young neighbor deliver her Christmas list to Santa. The human cameos include Whoopi Goldberg, Jane Krakowski, Nathan Lane, Uma Thurman and, uh, then-New York mayor Michael Bloomberg. The real magic, however, is another batch of songs from Paul Williams (who even makes an appearance as — what else? — Santa’s head elf).

Where to watch: As one of the first Muppet productions after the troupe was purchased by Disney, you’ll find this one on Disney+ too.

Lady Gaga and The Muppets Holiday Spectacular (2013): On paper, this one should have worked: The Muppets were two years out from a popular return to film (co-written by Jason Segel, with Oscar-winning songs by Bret McKenzie of Flight of the Conchords), and Gaga is exactly the kind of 21st century icon who’d fit right in with Kermit, Piggy and the others. Unfortunately, the opportunity for holiday magic is squandered in favor of promotion — in this case, the singer’s ARTPOP — and not even cameos from Elton John and RuPaul can elevate this past unusual curio status. And it’s a shame, since Muppet Christmas specials ironically helped push the boundaries of unusual curios in the first place.

Where to watch: YouTube is your connection here; no streamer’s living for the applause at the moment. 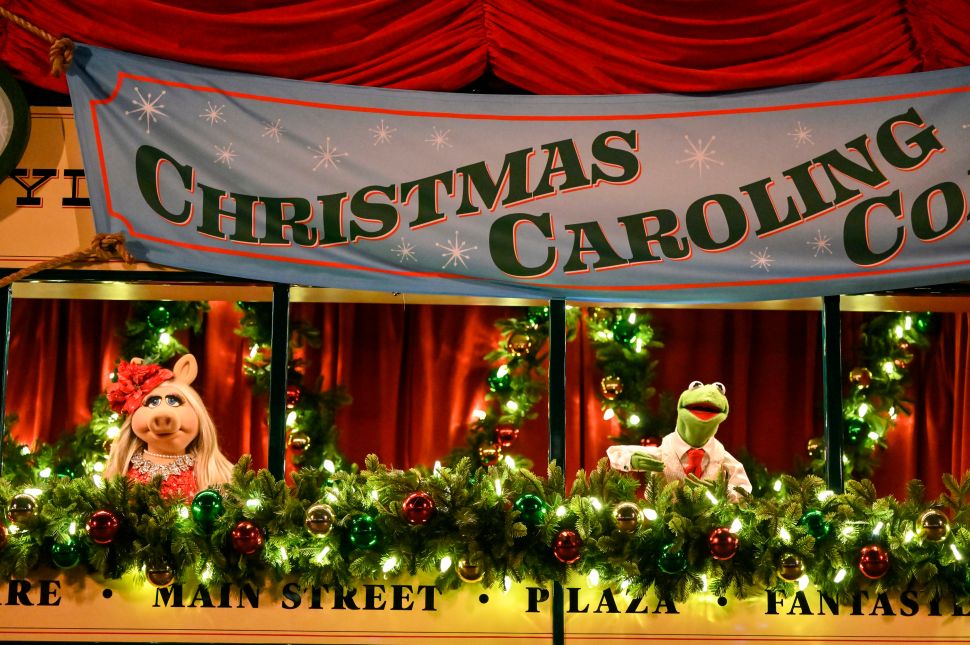