Spoiler alert for “Spoiler Alert”: Photographer Kit Cowan lived his last with writer Michael Ausiello in Apt. 808 at the Whitby apartment house on West 45th Street in NYC. On the same floor—in Apt. 805—lived the author of this article and his husband Charles Nelson, oblivious to the tragedy unfolding three doors away.

The aptly titled Spoiler Alert, which has settled into Manhattan movie houses for a while, begins with the final gasp of a gay relationship between Michael Ausiello (Jim Parsons) and Kit Cowan (Ben Aldridge), then flashbacks non-chronologically across their recent past—from meeting-cute to courtship to love-in-full-bloom to marriage and to the unmovable roadblock: terminal cancer.

Being a writer, Ausiello put all the above on paper, chronicling the ordeal and getting it published as a book, Spoiler Alert: The Hero Dies. When his memoir was released in 2017, he knew exactly who should moderate a Q&A at a Barnes & Noble in L.A.: Jim Parsons. Since Ausiello covered television for TV Guide, TV Line and Entertainment Weekly, the two crossed paths many times while Parsons was raking in Emmys (4) and racking up years (13) via The Big Bang Theory.

“I knew Michael, obviously, from being interviewed by him, but I had no idea this was going on in his life,” Parsons says. “You never know what’s going on with somebody else, completely. You don’t know what’s going on behind the scenes that may be informing their day. That was interesting. It’s not really part of the movie, but it was part of my experience with him.”

Reading the book in preparation for that bookstore Q&A was what opened Parsons’ eyes and filled them with tears.. His husband, producer Todd Spiewak, found him sobbing in their living room—and felt if he had such a strong emotional reaction to the story, maybe it should be optioned for the movies. Indeed, Spiewak confronted Ausiello with just such a proposal at the Q&A—and a film was born.

As directed by Michael Showalter, the love scenes between the two men are beautifully natural, underplayed, almost effortlessly. As a participant, Parsons agrees: “The effort—quote, unquote—was so joyful that I would say, ‘Yes, it was easy.’ It’s where the joy really was for me. I don’t think that I saw it coming until we were doing it, but I felt I was getting a chance to partake in scenes as an actor that I never fully dreamed I would be a part of. There are many things about this project that I was drawn to because it did echo for me—in different ways and forms—a lot of the movies I grew up knowing and loving, and those almost always were about straight couples.

“I don’t even say this to claim I had an issue with that—in fact, kinda the opposite. Even though I was gay or going to be gay or didn’t know I was gay, whatever it was, I still connected to them as people who loved each other and went through things like this very, very deeply. But I do realize, in retrospect, there was certainly a part of me that would never have imagined for one second that I would, as an actor, ever grow up to play in those types of scenes, playing someone as close to myself as a gay man, playing a gay man with another man on camera. I didn’t see that happening. There’s a fullness, and a richness, to getting to do this that I had not known before as an actor.”

During the filming, Ausiello was a constant on the set. “I would refer to Michael as ‘the character,’ and Michael would be in the room with me, and I’d have to apologize for calling him a character,” Parsons remembers. “Having him around—he was there, every day, through the whole process and through the whole making of the movie—served as a reminder of the powerful fact that this has really happened. It spoke to what I think is so powerful about the story which really goes beyond the specificities of their relationship and speaks to just what it is to have the honor of spending part of your life with another person in that way. The real gift of a tragedy such as this, which lays bare what’s important and what’s not important in your life, is facing a situation like this together. And, when you do that with another person, what I connect to so deeply and what he chronicled in their journey was that they really were as close as just two souls going through this together. It’s a very rare circumstance, and as painful as it is, it’s also a real gift.”

Even before The Big Bang Theory ran its 280-episode course, Parsons was scouting around for new acting turf. Luckily, he caught the Broadway-revival retreads of two of Off-Broadway’s most famous gay plays—Larry Kramer’s The Normal Heart in 2011 and Marc Crowley’s The Boys in the Band in 2018. Movies were made of both productions. In the former, he made his Broadway bow as the lightweight Tommy Boatwright and won a Theater World Award for it. In the latter, he was the nasty party-host Michael, and the landmark play earned Crowley a 50-year-overdue Tony.

“Those were two major, major moments for me, as an actor but also as a man. Both have been highlights of ways in which, without consciously searching for it, materials and opportunities were brought to me that really expanded me—again, yes as an actor and career-wise but also as a person, as a man growing more hopefully comfortable and secure in his own life with every year.”

So, too, is A Man of No Importance, his current musical playing through Dec. 18 at the Classic Stage Company. “Again, it was something brought to me I didn’t know I was looking for. They all offered me this opportunity to explore aspects of myself as a man and as a gay man in this world.”

Right now, he’s waiting for his all-clear Covid signal so he can jump back into the show for at least the last week. He plays a role originated by Albert Finney in the 1994 film and musicalized by Roger Rees in the 2002 play—a Dublin bus conductor who dabbles in amateur theatrics (specifically, a church staging of Oscar Wilde’s Salome) and harbors repressed sexual feelings.

“It explores two things that are paramount to my life in both being a homosexual but being a creature of the theater,” says Parsons. “All my life, sometimes knowingly and sometimes unknowingly, I have found such love, acceptance and community in the theater. It’s one of the things that moves me so much every time—being surrounded by all those other actors and feeling that level of camaraderie that is unique in my experience.” 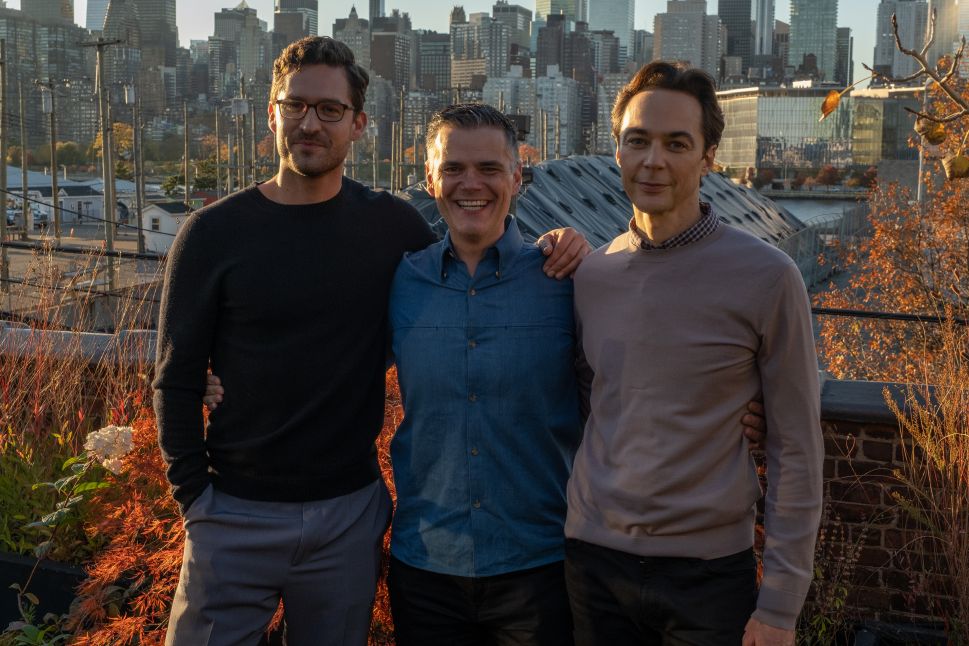