The Collaboration — the latest bio-drama from New Zealand writer Anthony McCarten, now being presented through Jan. 29 at the Samuel J. Friedman Theater by Manhattan Theatre Club — refers to the oil-and- mix of Andy Warhol, the pop-art pioneer, and Jean-Michel Basquiat, the wild-child graffiti-artist and neo-expressionist some 30 years his junior.

Can this marriage be saved? No! It’s a marriage made in an art dealer’s heaven — specifically, their own blowhard representative, Bruno Bischofberger (here, well managed by Erik Jensen). Bruno paired his two prize acquisitions for what he trumpeted as “the most exciting show in the history of contemporary art,” without regard to their age gap, their ethnicity, or, most of all, their styles.

“Painters are like boxers,” Bruno declares in the play. “Both smear their blood on the canvas.” The art he coaxed out of these two didn’t quite jibe at the beginning. By this time, Warhol had moved beyond silkscreens to piss paintings and (much to Basquiat’s irritation) wielding cameras. But they did have a friendship, and in the mid-1980s they did somehow — miraculously (even to them) — produce 110 pieces of highly regarded creative teamwork. It was their last blast of glory. Neither made it out of the ‘80s. Warhol, 58, died on Feb. 22, 1987, while recovering from gallbladder surgery; Basquiat, 27, followed suit 18 months later of a heroin overdose.

McCarten’s batting average with biographies is notable. In the last seven years, he’s written Oscar-winning roles for Eddie Redmayne (Stephen Hawkins in 2015’s The Theory of Everything), Gary Oldman (Winston Churchill in 2018’s Darkest Hour) and Rami Malek (Freddie Mercury in 2019’s Bohemian Rhapsody). It’s fair to say that his work brings out both the best actors and the best in those actors.

In this case, that’s Paul Bettany as Warhol and Jeremy Pope as Basquiat. Both were cheered for their bravura performances when their Collaboration lifted off last February at London’s Young Vic, and now they’re on Broadway hearing the same. In between, they further rehearsed for the film version. All three versions of The Collaboration were directed by Kwame Kwei-Armah.

“The film isn’t edited yet,” Bettany tells Observer, adding its earliest release would be late summer (there are hopes of a Venice Film Festival bow). “There are many changes in the film. It’s opened up a lot more. You meet Basquiat’s mother — and Warhol’s. You spend more time with my character.”

There are already several movies that touch on the Warhol-Basquiat relationship (with a Basquiat biopic, Samo Lives, in the works). “I don’t know if there are any about their collaboration,” proffers Bettany. “There is an amazing documentary called Radiant Child about Basquiat. Then there’s the film that Julian Schnabel wrote and directed, Basquiat.” The Schnabel film — which saw Jeffrey Wright’s film-debut in the title role, and David Bowie as Warhol — came in 1996; the documentary, directed by Tamra Davis, in 2010.

But no previous movie has generated the award buzz of The Collaboration. Again, all roads lead to McCarten. His previous biopic, 2020’s The Two Popes, put two actors in the Oscar running: Jonathan Pryce for Best Actor as Cardinal Bergoglio and Anthony Hopkins for Best Supporting Actor as Pope Benedict.

Bettany sees a thematic similarity between The Two Popes and The Collaboration: “People with very opposing ideas discovering that they have more in common than they thought they had.” Pope Benedict XVI and Pope Francis; Warhol and Basquiat — each pair approached their callings in very different ways. “Two people who seemingly have nothing in common finding common ground,” Bettany says. “I think that was true of Basquiat and Warhol.”

So how does Pope (the Jeremy kind, a two-time-in-one-year Tony nominee for Choir Boy and Ain’t Too Proud, both in 2019), shape up as a scene partner? “It’s like flying in your dreams,” declares  Bettany after a moment’s thought. “It’s wonderful. He’s extraordinary. He can come on and be tired or be nervous or be frightened about someone in the audience, and I just look at him and I feel grounded enough to fly. He’s just new and different every night.”

It was a film-producer friend of Bettany’s, Dennis O’Sullivan, who flagged him down from the Marvel Cinematic Universe (where he has two related roles, J.A.R.V.I.S. and Vision) and invited him to play Andy Warhol. Not only would it provide Bettany’s Broadway debut, it would be his first time on any stage since he did Joe Penhall’s Love and Understanding at Long Wharf in 1998.

“I said no,” Bettany remembers. “Too much going on: the tics, those glasses, that carefully curated public persona, acting my way out from a white fright wig — and how do you do that monosyllabic thing for two hours?”

He continues: “Then Dennis sent me Warhol’s diaries, which I read and then realized what dictated the way he talked. They were in these long, circuitous sentences. Anna Wintour and Candice Bergen told me he could be quite verbose in private, so I thought, ‘Maybe the trick in playing him is as a frog in , not noticing the is heating up’ — to start showing a more familiar hesitant Warhol, then slowly have him become more fluid with language while hoping the audience doesn’t notice.”

An American accent is one thing that the London-born-and-raised Bettany doesn’t have to worry about. He resides in Brooklyn Heights, having first tried out Tribeca, where he encountered a homeless couple who would inspire his directing debut, 2014’s Shelter.

The wife in Shelter was played by his own ravishing wife, Jennifer Connelly. They met in 2001 during the New Jersey filming of A Beautiful Mind when she was doing Oscar-winning work. Both were in other relationships and didn’t wed until Jan. 1, 2003, in a private ceremony in Scotland.

These days, Bettany operates in a global workspace. Broadway took the longest “to knock off.” A week or so after finishing The Collaboration, he heads to London, where he will begin a movie with Tom Hanks called Here, directed by Back to the Future’s Bob Zemeckis. “It’s based on a graphic novel from the 1980’s, which is an extraordinary thing. It’s sort of about the American experience over centuries, and it all takes place in the corner of one room.” 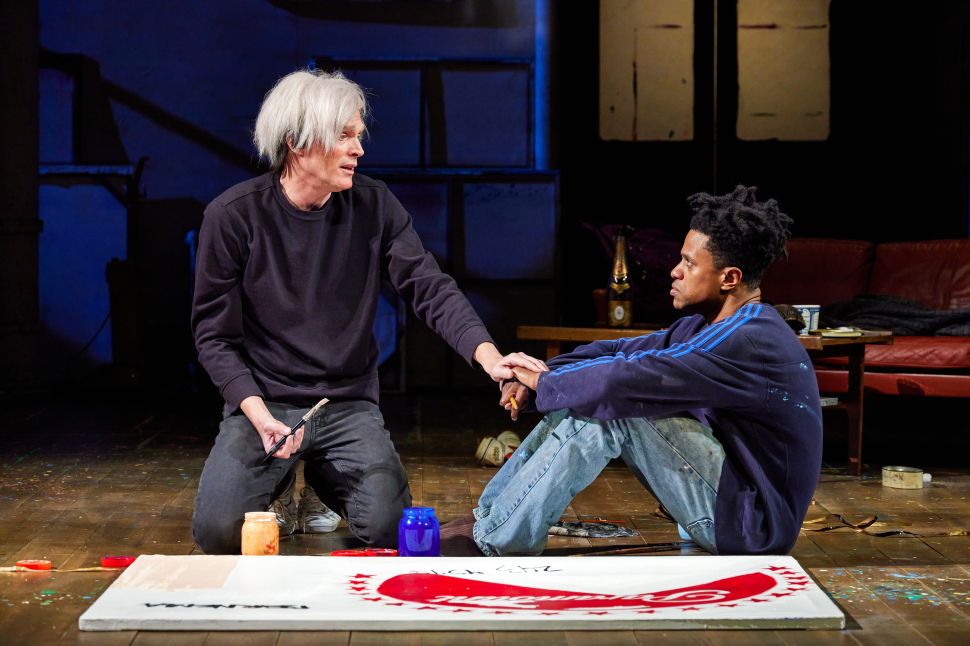