Twenty-one years ago, a month after 9/11, I reviewed Mamma Mia! on Broadway with an expectation of fun that soon curdled into cringe. This early jukebox musical, throughout which the ABBA songbook was grout-injected, seemed to me a tacky nostalgia cash grab. “But that shouldn’t stop Boomer patrons from soul-training down the aisles,” quoth I with a sneer, “shaking their arm wattles to the beat of ‘Dancing Queen.’” Two decades on (batwings quivering as I type), having winced through A Beautiful Noise: The Neil Diamond Musical, I now tearfully murmur, The love you gave me, nothing else can save me. S.O.S.

For Mamma Mia! had a plot; A Beautiful Noise has an appointment with a shrink. Somewhere in his late retirement years, the frail and grumpy—oh, and fabulously rich—pop star Neil Dimond (Mark Jacoby) sits across from an unnamed psychologist (Linda Powell), because his wife insists he get help. Help with what? The evasiveness around mental illness is the first sign that book writer Anthony McCarten is walking on eggshells while trying to froth up drama from Diamond’s trajectory. He was a nice Jewish boy from Flatbush who worked hard, cranked out numerous hit songs, married thrice—yet battled depression his whole life. Lord knows an artist can spend decades mining their pain and still need therapy, but McCarten’s coyness about what brings the elder Diamond to the couch saps credibility at the center of this gaudy hit parade.

All due respect to that catalog, which numbers among its earworms “I’m a Believer,” “Solitary Man,” “September Morn,” and the 1969 swinging singalong “Sweet Caroline.” (The latter the unofficial anthem of the Boston Red Sox and constantly blasted at Fenway Park—presumably because it’s about a guy who gets to third base.) Personally, I came into contact with the Diamond oeuvre through the easy-listening radio station my mother used as emotional white noise; he blended into the mellow audio slush of Helen Reddy, Gordon Lightfoot, and the Carpenters. By the time I was a teen, Diamond was a talent savored only ironically, his mopey, vaguely religiose soft rock a snicker-worthy contrast with the spangly suits and lounge-lizard growl. This is all to say, one doesn’t expect much from a sloppy Broadway embrace of Diamond—unless the creative team has a startling frame or irreverent approach.

They don’t. Powell the therapist hauls out a tome of collected lyrics, leafing through it and coaxing her patient to connect his lyrics to past trauma. It’s as if McCarten is signaling his own Mad Libs attempt to knit a story. If there is a brave, stirring journey of the soul for Neil Diamond, he missed it. Or McCarten doesn’t know how to make this stubbornly inward character active and sympathetic (unlike his inspired fabulation for The Two Popes). Either way, there’s not enough narrative tension or evolving character to breathe life into this by-the-numbers Wikimusical, blandly narrated from the sidelines by elder Neil in his therapist’s office. As my eye wandered to Jacoby and Powell watching Neil’s past unfold as if he were an AOR Ebenezer Scrooge, I wished the producers had those chairs on wires. Just imagine: Flying Psychologist Armchairs—whisking you back to Primal Scenes!

At the end of a soggy second act, the low-rent psychoanalysis (blatantly ripping off Bobby’s group-assisted breakthrough in Company) climaxes in a treacly medley arrangement (by Sonny Paladino) of “America” and “Brooklyn Roads.” The doctor guides Neil to merge with his inner child, that dreamy Brooklyn lad whose loud, second-generation immigrant parents . . . loved him too much? “We’re Jews! Of course we’re anxious!” his mother screeches at him. No one is asking for sexual abuse or attempted suicide, but this self-pitying psychodrama built around the lonely, gifted child and workaholic-entertainer tropes needs more meat on its sequined bones.

We get that Neil was a moody songsmith (nicknamed “Hamlet” by the owner of the Bitter End) who received fan adulation but not enough industry respect. Was he a tyrant in the studio? Did he ever go to rehab? Have sordid flings with groupies? Who knows? The crucial ingredients for a juicy rock bio are lacking: sex (barely), drugs (nonexistent), and rock ‘n’ roll (kinda). No depravity, no rock bottom, just Neil being gloomy, selfish Neil. I’m surprised his therapist doesn’t give up before intermission. Powell’s character is denied a name, much less a chance to push back on the entitled crooner’s petulant solipsism. First rule of a book writer interviewing famous subject: get signed permission to call them an asshole in the script.

I’ve avoided mentioning the star performance thus far mainly because Will Swenson doesn’t give one. Despite an uncanny vocal impersonation, the hard-working trouper fails to transcend the inherent cheese factor in this misbegotten endeavor—being himself a reliable source of theatrical camembert. Beefy, so earnest he’s phony, straining for connection with his fellow actors and audience, Swenson resembles a coked-up uncle at the family reunion who karaokes the crap out of “Kentucky Woman” and knocks over the barbecue. Check out young Diamond in concert on YouTube. A wispier, gentler emo boy with a bit of mystery and that faint accent would cause us to lean forward rather than rear back.

Even if Swenson bears the brunt of the punishing spotlight, he has support. Hard-dancing blonde powerhouse Robyn Hurder pumps sex and sweat into the proceedings as Neil’s truth-telling second wife, Marcia. As his high-school sweetheart, Jessie Fisher unleashes a rich, smoky soprano and an angelic glow for the back row. There’s some (attempted) comic relief by Tom Alan Robbins and Michael McCormick as a crooked producer and a mobster, respectively, with whom Neil unwisely signs. But too many scenes simply staple-gun Neil’s successes to divorces to sessions, with random excisions (Barbra Streisand duet, The Jazz Singer movie flop). Neither the overanxious staging by Michael Mayer nor Steven Hoggett’s punchy, strutting choreography graft much fluidity onto the jerky, vacant pageant.

It all comes down to storytelling: the story Neil tells himself; the one A Beautiful Noise re-tells us. Musicals (most of them) need a resonant, gluey book the way an oak needs root structure; successful books are rhizomatic—invisible and everywhere. It’s a more urgent criterion for the love-it-or-hate-it jukebox subgenre, which decays into meta-silliness so easily. Sure, audiences flock to a beloved icon’s catalog, but if fame were enough, past flops cobbled around The Beach Boys, Elvis, and Johnny Cash would still be running, not near-forgotten (Good Vibrations, All Shook Up, and Ring of Fire for those who don’t hoard Playbills). Beautiful—The Carole King Musical and Jersey Boys caught that pop lightning in the bottle through a combination of humor and ruthless fictive devices. “Rockstar in analysis” is an idea with potential; the couch is a charged locus for rage, tears, and revelation. Or a nice nap. 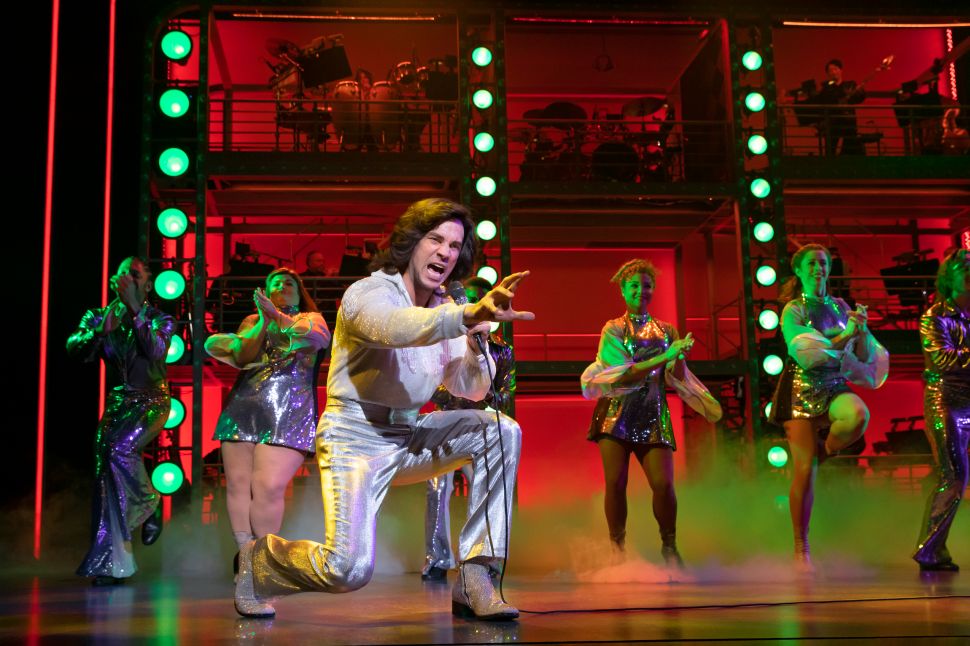