Sonja Frisell’s Aïda is currently taking its final laps at the Metropolitan Opera thirty-four years after its premiere. Many are sorry to see her opulent take on Verdi’s opera of love and honor in ancient Egypt disappear and are rushing to catch it once more. Unfortunately, some of the singing in front of Dada Saligeri’s jaw-dropping sets has been decidedly lackluster.

The Frisell arrived hard on the heels of Franco Zeffirelli’s extravagant and expensive versions of Puccini’s La Bohème and Turandot, both of which remain audience favorites. However, Met General Manager Peter Gelb announced that 2019 would see the finale of the company’s traditional Aïda to be replaced with one conceived by Broadway director Michael Mayer. Scheduled to open the 2020-21 season, his new vision was postponed due to the pandemic, and this fall the epic old production was unexpectedly welcomed back.

The first performance on December 2nd also heralded the return of Latonia Moore to her signature role, one with which the soprano made her surprise Met debut then years ago replacing an ailing colleague and one which she’s performed over 150 times. Anticipation was high as Moore has recently endeared herself to local audiences with her fervent portrayals in Porgy and Bess and Fire Shut Up in My Bones. However, opening night also proved to be closing night for Moore’s Aïda as she withdrew from the rest of her Verdi performances.

After the Met posted a video of a bit of her “Ritorna vincitor” filmed at the dress rehearsal, many were alarmed at her choppy phrasing and shortness of breath.

Though she began that Friday’s performance well, it soon became clear that Moore was not in good voice, and she often appeared distracted. Some forte high notes retained their old gleam, but many others were awkwardly attacked. Unprecedented in my experience, she substituted an A for the notorious high C in “O patria mia.”

In Moore’s sudden absence, the Met turned to Michelle Bradley who had been scheduled for performances later in the run. While a clear improvement over Moore’s distressing effort, Bradley’s Aïda proved frustratingly inconsistent at her third outing on December 13th. She reveled in long legato lines, but her soft high notes occasionally failed to float. While her big rich voice securely sailed over the ensembles, she might have given too much as she tired palpably during the demanding third act.

Like a number of African-American sopranos, Bradley is often hired to sing Aïda, perhaps a convenient way for opera houses to avoid the “blackface” controversies that have lately plagued performances of this opera. But the role is one of Verdi’s most demanding and I wondered if she should be singing it so often—fourteen times at the Met this season alone. Perhaps she was not on her best form on the 13th, but she may also be better suited to more lyric parts.

A tall, beautiful woman, Bradley effectively balanced the Ethiopian princess’s royal bearing with her enforced subservience in the Egyptian court. More rehearsal though would surely have been helpful. While the crowd scenes were ably managed during this unexpected revival, many details of Frisell’s staging have long since disappeared and Stephen Pickover’s direction consisted of little more than moving the principals from point A to point B.

While Bradley was new to the Met’s Aïda, the two mezzo sopranos performing Amneris were not. Moore’s nemesis was Olesya Petrova repeating her fine portrayal which I’d seen opposite Sondra Radvanovsky during the previous “final” run. Her firmly pungent mezzo, while not large, evoked the princess’s haughty privilege and desperate vulnerability with equal force. She might have twirled her cape a bit too melodramatically during the Judgment Scene, but she won a hearty ovation.

December 13th’s performance with Bradley marked the much-anticipated return of Anita Rachvelishvili to a role with which she had scored a huge success opposite Anna Netrebko in 2018. However, since the birth of her daughter last year, the Georgian mezzo has withdrawn from a concerning number of important engagements including the Met’s recent Don Carlo. From her entrance as the imperious Egyptian, she displayed little of her past commanding vocal flair. Her breath support often failed her resulting in a hollow middle register, harshly barked chest tones and flat, desperate high notes. As with Moore, it was upsetting to encounter an important artist in such poor form, and it was no surprise that several days later Rachvelishvili too dropped out of the rest of her engagement.

While several of his prima donnas struggled, Brian Jagde at both performances sturdily if loudly embodied Radames, the opera’s undeserving love object. While I wished for more sensitivity to Verdi’s dynamics— both evenings he resolutely trumpeted out the high B-fat that ends “Celeste Aïda”—his impressive vocal security was much appreciated, particularly when recalling inadequate Met tenors of the recent past.

Christian Van Horn did not sound like Ramfis was a congenial role for his gravitas-light bass-baritone.  On the other hand, bass Alexandros Stavrakakis, who had made an arresting debut as the Monk in Don Carlo, might have been a better choice for Ramfis. Instead, he proved a striking King. In the brief role of the Messenger, Matthew Cairns eagerly grabbed my attention in his company debut at the December 2nd premiere.

George Gagnidze wielded his harsh baritone as Moore’s scheming daddy in a blandly villainous, one-note interpretation. However, opposite Bradley, Quinn Kelsey limned a fiercely regal Amonasro with his beautiful, yet incisive voice. Despite several compromised principals on stage, in the pit Paolo Carignani coaxed exquisite sounds from the Met orchestra while the chorus, particularly the men’s contingent, sang with thrilling urgency even when an obstreperous horse loudly bucked and snorted both nights during the show-stopping Triumphal Scene!

I attended the premiere of Frisell’s production in 1988: at my very first Aïda, I most remember gasping at the spectacular scenery which Fiorenza Cossotto frequently chewed! Some opera fans are eager to see the last of this old-fashioned production. But I’m more concerned about what will replace it during the 2024-25 season starring Angel Blue in the title role. Mayer’s previous Met productions—Rigoletto and La Traviata—have been much reviled, and I’m not hopeful that his third stab at Verdi will prove the charm. 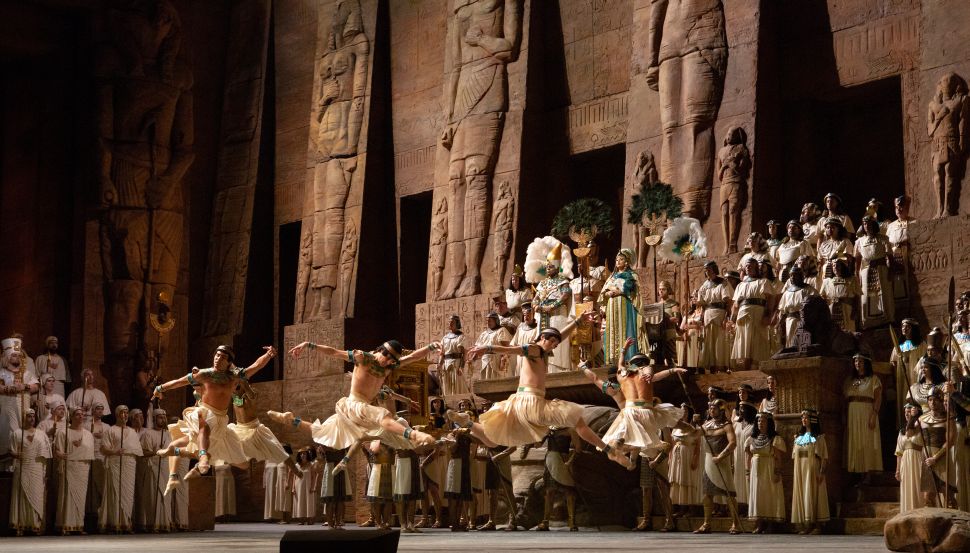